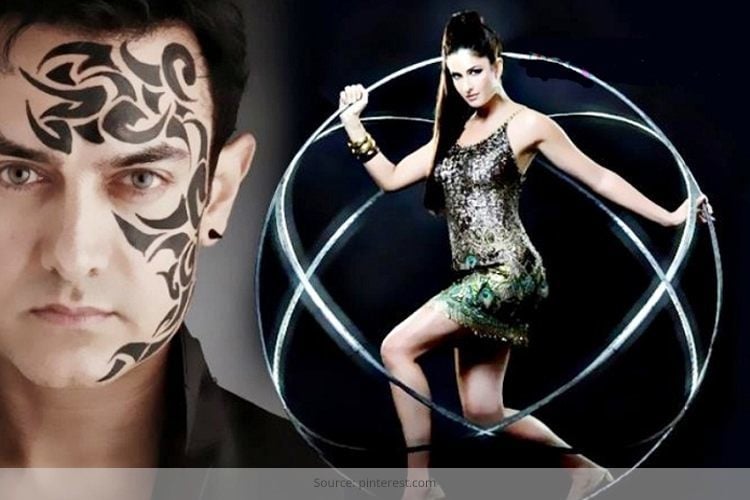 Dhoom 3 is back with its badass thieves, sharp cops, comic side-kicks and a beautiful leading lady! Bollywood’s official Barbie Doll Katrina Kaif will be paired opposite Aamir Khan in this super-stylish, slick thriller.

The first look of the film showed Katrina in a fit avatar sporting a white halter with a pop of pink and teeny black shorts. Whereas Aamir Khan will be seen in fabulous action sequences while showing off his chiseled body and six pack abs.

The major speculation is whether Katrina will sport a bikini or not in this much-awaited sequel. Since the time her bikini pictures while on vacation with Ranbir Kapoor spread all over the media, she has been hesitant to sport a bikini in the movie.

Yash Raj Films started a trail of style, trend and fashion with Dhoom which introduced Esha Deol in a hot diva avatar flaunting her new-found toned body in a daring bikini. As she emerged from the beach in a floral print bikini with a see-through top, she set the temperatures high with her bronzed body.

Whether it be dancing to the popular number Dhoom Machale Dhoom or sporting mini denim skirts with groovy tees in the rain, she added glam quotient to the movie.

While John Abraham, fresh from his modelling days, set the screen on fire with his stylish swagger, black leather jackets, rugged pants and deadly long locks.

After the blockbuster success of Dhoom, its sequel Dhoom 2 notched the style quotient several times higher with its beautiful and piping hot leading ladies Aishwarya Rai and Bipasha Basu.

In her role as Monali, she sizzled the two piece colorful  bikini with elan by showing off her long, toned legs and flat abs. Accessorized with chunky colourful beads, long chains and sunglasses, she looked gorgeous in her beach avatar.

Her overall look bordered between seductive and mysterious with bronzed body, highlighted cheekbones and hair streaks.

Hrithik Roshan looked every bit the Greek God with his muscular body, aqua green eyes and form-fitting clothes. With his numerous get-ups, styles and look in the movie, he pulled off each with extreme ease and style.

With such a display of fashion, style, glamor and oomph in each of the Dhoom movies, we cannot wait to see what Dhoom 3 has in store for us! Expectations are running high on the overall look and glamor quotient in the film.

Step by Step Retro Hairstyles: Guide To That Vintage Hair

Save Your Soles: 8 Effective Ways on How To Protect Your...

Fashionlady - August 20, 2016 0
Sonakshi Sinha may have brought to us the rage and fashionable touches of the lehenga saree, and we learnt from that on music video...