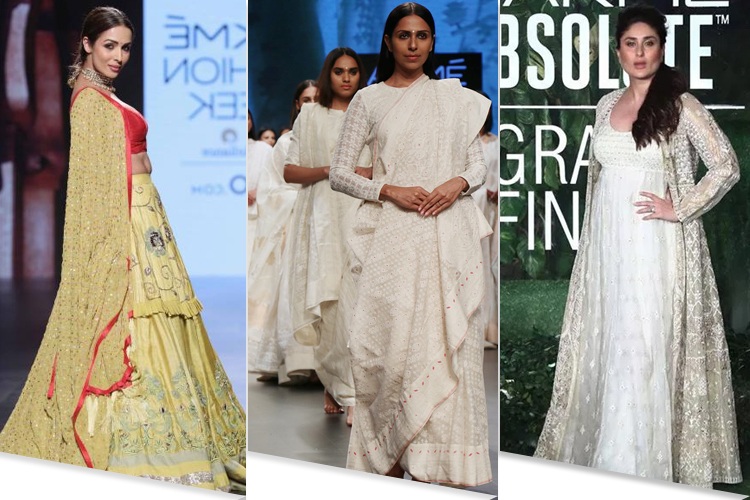 And it’s a wrap for the first fashion week of 2017. The 5 day fashion soiree delivered all that it committed, unfolding the road ahead for the upcoming season on the ramp. With the best of beauty and creative brains coming together, The Lakme Fashion Week Summer Resort 2017 gave us a lot many fashionable moments to savor.

Re-living the weekend one last time before moving on, here are all the highlights from the Day 3, 4 and 5 of the LFW Summer Resort 2017.

Designers like Chola, Sva, Ritu Kumar delighted us with their summer presentations. Falguni and Shane Peacock made a glamorous LFW comeback with their red carpet staples. 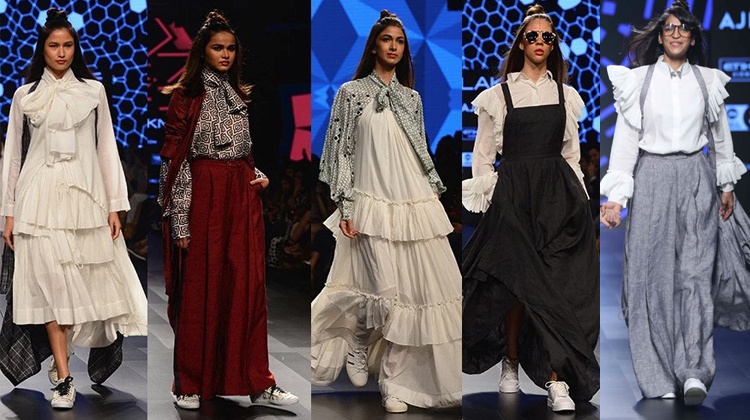 SVA by Paras and Sonam Modi

The designer duo rekindled our memories from the era of the Britishers with their collection that drew inspiration from the beautiful dancer of those times, “Noor”. Rich fabrics of silk and satin were featured in a more sophisticated English color palette, adorned with delicate handcrafted embellishments. The royal ethnic collection found a befitting showstopper in actress Nimrat Kaur who was draped in a red and dull gold lehenga set. Payal Singhal’s murder mystery inspired collection named “ Lady M”, created much curiosity among audiences. Inspired by Agatha Christie’s novel, Death On The Nile, Payal had her muses draped in fluid silhouettes that reminded of the high society elites of the 1930’s. In shades ranging from deep midnight hues, to soft romantic pastels flaunting Payal’s signature silhouettes and embroidery. Diana Penty was the showstopper for this curious collection. 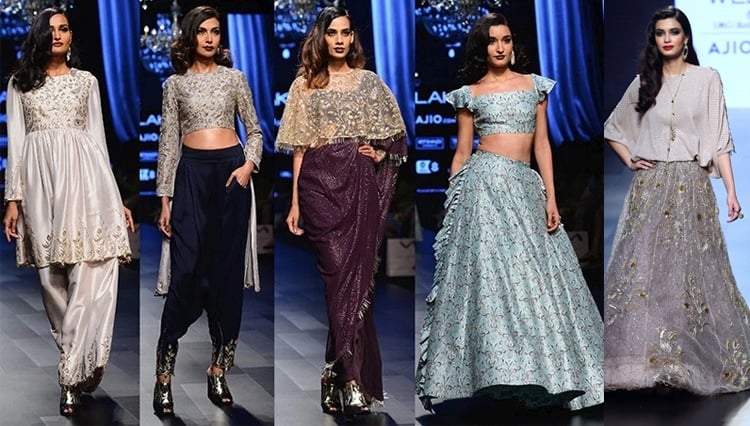 The #Tagfree show was a unique showcasing with about 7 designers taking to the ramp with collections that announced the message that beauty is to be valued beyond the barriers of looks. Breaking stereotypes and taboos with respect to women, the show attempted to highlight the individuality of each and every woman across the varied diversities. After a 6 year break, designers Falguni and Shane Peacock were back with a glamorous finale show. The designers presented their cocktail collection, titled “ The Rebel”, featuring a host of body hugging dresses and bodysuits, in delicate tones beaming with a whole lot of crystals, feathers and sequined detailings. Bipasha Basu made for a stunning showstopper for this charming red carpet collection. Day 4 at the Lakme Fashion Week Summer Resort 2017 was a yet another busy day oozing with the hustle and bustle of trendsetters and designers. A heavy line up and some ecstatic collections won the hearts of the audiences.

Nupur Kanoi graced the LFW ramp with her athleisure line interpreted in its more glamorous forms. The show titled “ Lost and Found In Africa”, drew inspiration from the body tattooing and piercing tradition in Africa. The showcasing set in vibrant tribal tones of reds, maroons and blacks giving way to blues and greys beamed with glass bead work and unique tie and dye techniques. 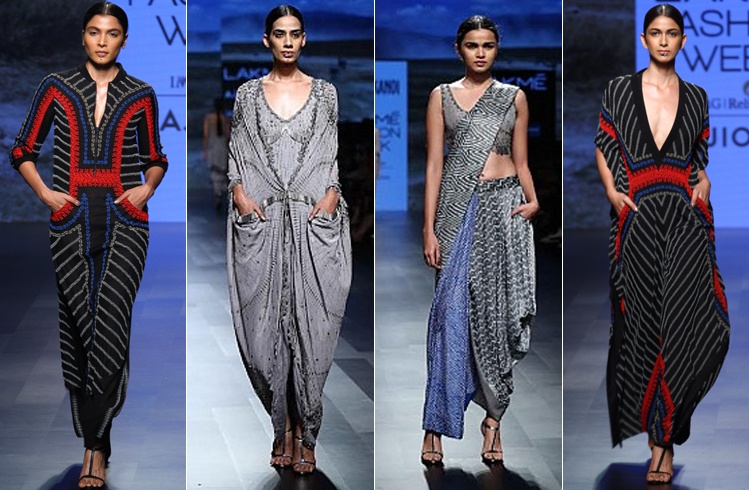 Nishka brightened up the runway with her chic casual collection to beat the heat the fashionable way. A relaxed collection set in a color palette featuring ivories, blacks, and grey making way for pinks, lilac and pistachio. The collection featured refreshing knee length dresses, separates, cutout dresses, midis and blazers. Presenting a summer staple ethnic line was Kotwara, with it’s contemporary version of classics in a range of ivory and neutral hues. Zardosi and Kamdani karigari on banarsis and voiles rendered the classic summer vibe. Aditi Rao Hydari cladded in a black lehenga set was the showstopper for the show. Savio Jon returned to the Lakme Fashion Week runway this season presenting a collection which is more of a ready wardrobe for the fashionistas of today. With elements like buttons from the 30’s, raffia, and batiks collected over time, the Goa based designer amped up the ramp with his mesh separates flaunting a touch of bandhani and satin overlays boasting of architectural aesthetics. The ace couturier closed the Day 4 with a charming and mighty collection. Fusing his quintessential drapes and florals with georgettes, banarsis and crushed fabrics, Tarun presented a regal bespoke collection for the women who appreciate fine detailing. Ready to wear separates, resort saris and lehengas worn with shirts was the trademark of this summer showcasing. Author, chef and model Padma Lakshmi made her runway comeback playing showstopper for her friend. The final day showcased celebrity designers, showstoppers and breath taking collections to close the show with much grandeur.

The master of textiles took to the ramp with a magical ethnic collection resulting from fusing pristine ivories with a dash of gold. Draped in muslins, the models were draped in voluminous ethnic garments and beautiful dupattas featuring handwoven motifs that spoke of a never ending love story with nature. Tabu decked up in a anarkali, played the beautiful showstopper for Gaurang Shah’s summer interpretation. 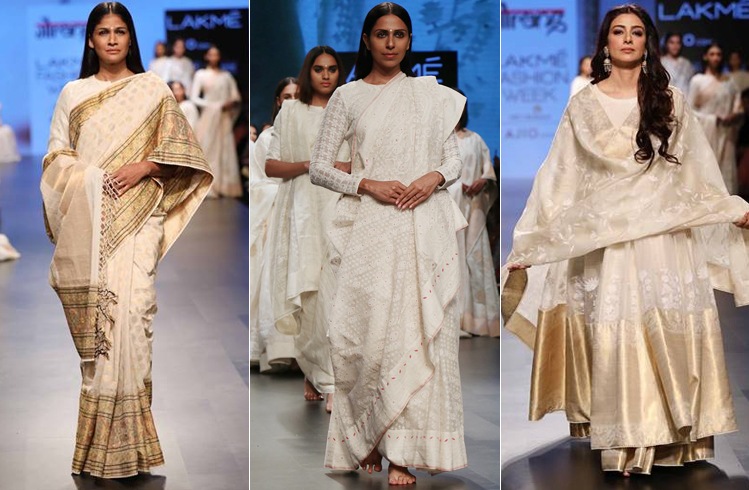 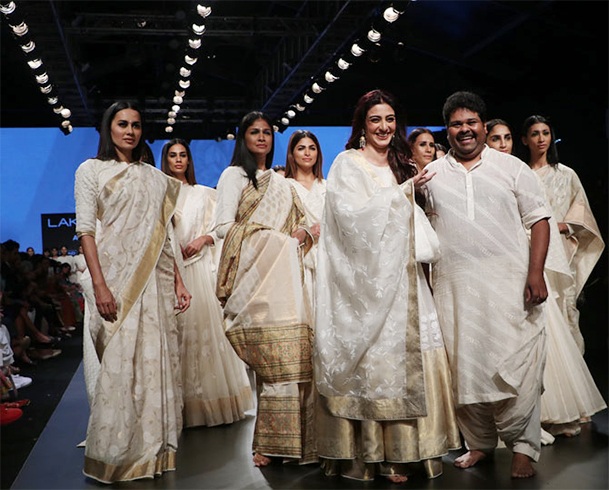 Jayanti Reddy presented a rather sensuous collection of capes paired with dhotis, embroidered lehengas, one shoulder draped silhouettes and saris boasting of playful feminine cuts and elements. Disha Patani was the designated showstopper draped in a blue lehenga set with a ivory dupatta. 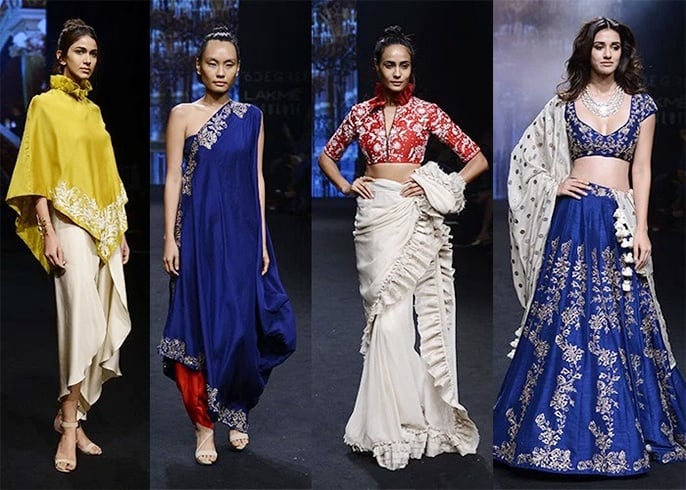 Sticking to her signature florals and flowy garments, Anushree Reddy’s spring summer offering featured one shoulder silhouettes and draped summer classics in shades of pastel pinks and greens. The collection titled, “ An Indian Summer “, was meant for the discerning bride tying the knot this season. 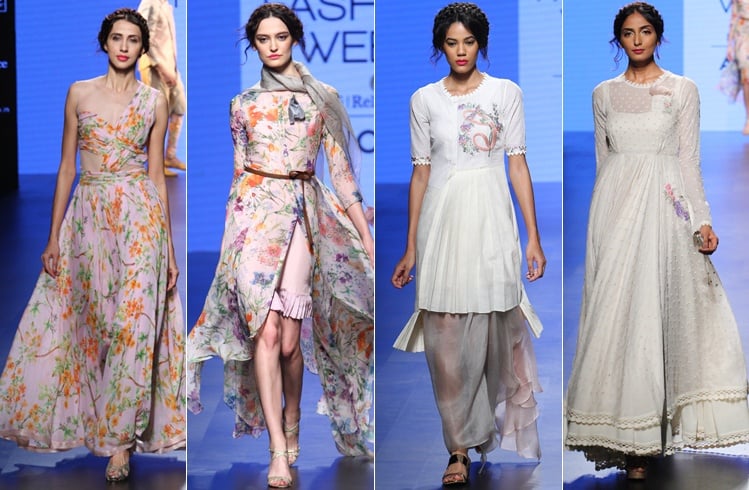 Presenting her modern interpretation of a princess, Divya presented a regal collection titled “ Shahabzadi”. The Mughal inspired collection featured ethnic wear in regal handloom fabrics woven from konda patti cottons and silks. Malaika Arora Khan sashayed down the runway as the showstopper draped in a red and yellow lehenga set. 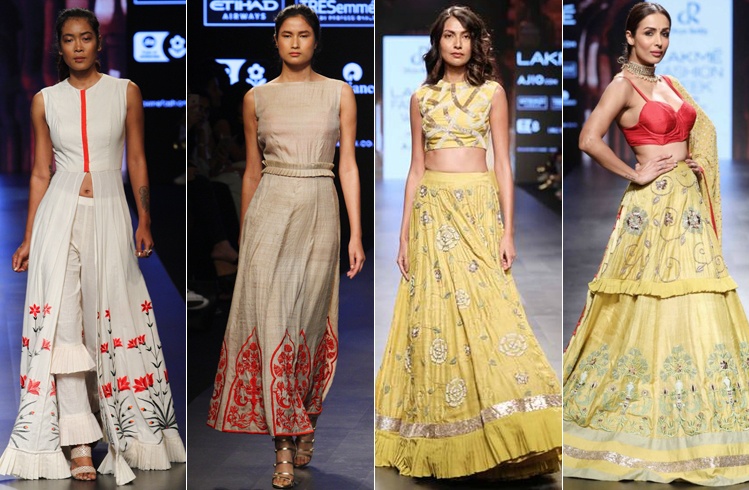 As part of the 6 Degrees show, designer Sashi Vengapalli displayed her interpretation of the art of Bidri. Sushmita Sen wearing a majestic lilac gown with a peplum bodice, made for a bold and beautiful showstopper enthralling the audiences with her perky strides. 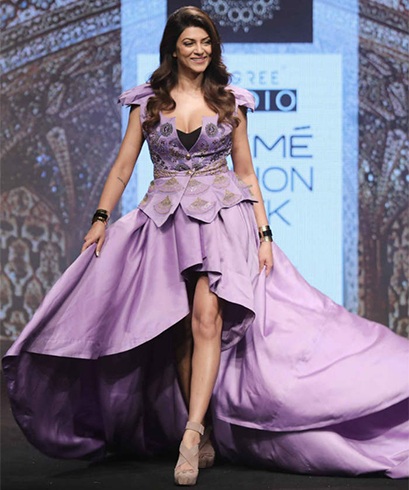 For the first time, Anita Dongre presented the finale collection at the Lakme Fashion Week ramp. Bringing the curtains down with her electrifying collection at the Bandra Fort, the designer had her models strutting down amidst the greens in a suave collection, titled “Alchemy” in line with Lakme’s liquid gold line, inspired by the sun kissed deserts of Rajasthan. Kareena Kapoor Khan was the showstopper of the night who caused a hysteria at the venue as she walked for the first time post delivery wearing a dazzling white and gold ensemble.