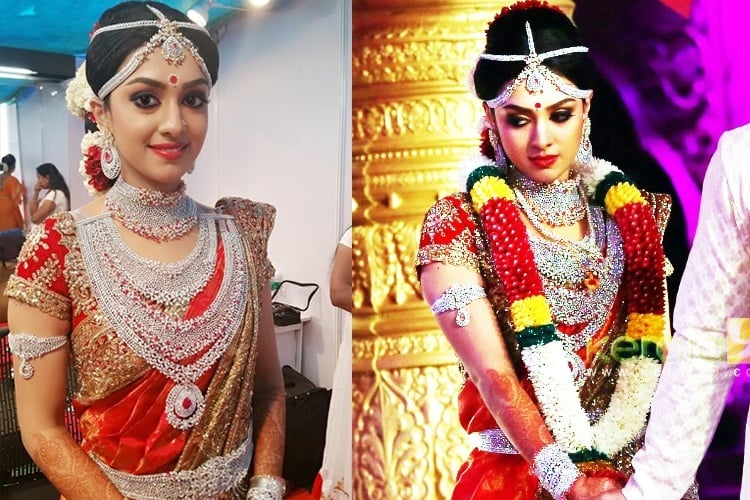 Just last month we took you all through a dream wedding that was fit for a Disney princess. Singer Angelababy’s wedding that costed a whopping amount of HK$260 million dollars had soon become the talk at FashionLady cubicles. The amount of exuberance, extravagance and grandeur couldn’t be unseen and everyone just had one thought in mind – oh wow!

The 223 Cr wedding had surpassed all the heights of expensive weddings and we had decided that there would be no other wedding on such a LARGE scale – in the next 10 years at the least.

But BAM came the news of Ms. Pillai’s wedding and shook the world. Her wedding was so grand that the tremors of it could be felt days after the wedding!

Before we divulge any details – take a look at how gorgeous Ms. Pillai looked for her wedding reception –

They make quite the happy and cute couple, don’t they?

NOW! The actual details of the wedding. Dr. Arathi Pillai was dressed in a beautiful silk saree designed by Manish Malhotra. She styled herself with a traditional bridal up-do, on fleek makeup with well defined brows and dark lips. To round her look, she added diamonds and then kept adding them until we could sing – shine bright like a diamond!

The grand wedding cost Mr. Pillai a whopping Rs. 55 Cr and what he said about the expenses melted our hearts – “Nothing is too grand for my daughter”. How adorable is that?

Take a look at the grand mandap –

The entire wedding set was spread over 8 acres and cost about 20 Crs. 75 days of hard work and 200 team members working on it gave the fantastic result. The team was headed by the creative director of famous Bollywood movie – Bahubali.

On the menu was a south Indian spread like never before! Entertaining the guests was Stephen Devassy’s fusion music and Navya Nair’s dance fusion. Manjari’s ghazal recitals and Naga drama by actor Mukhesh and his wife Methil Devika were the highlight of the event!

We wish the happy couple a very happy married life!

Aishwarya Rai or Kajol – Who Looks Better Inside THE Magazine?

Stiletto Nail: A Daring Yes Or Dangersome No

Celebrity Beauty Quotes to Motivate You this 2022