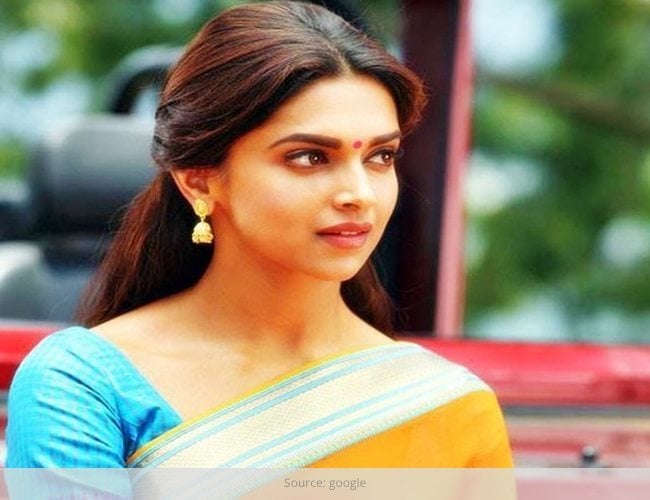 With a broad zari border on a green dupatta paired with an ari silk blouse donned over a yellow flowing skirt, Deepika Padukone in her typical avadai thavani (half sari) is almost a cliché in the role of village belle in “Chennai Express”.

Her costume, half saree, in the entire movie is about this traditional attire, except one or two of her scenes in a saree.

This humble South Indian traditional attire, is specifically for those who are too young to graduate into wearing a saree and too old to wear something without a dupatta. This traditional garment has now been adopted by the Indian fashion domain and Bollywood alike.

Manish Malhotra, who has styled Deepika in the movie, in a half saree said that he, along-with his team, studied the street fashion of Tamil Nadu and tried comprehending how the locals, especially girls from the countryside dress here. His creations were just the outcome of his research on South Indian street fashion.

Manish had tried to match the colors of his outfits with the director, Rohit Shetty’s portrayal of South India. Even though all his designs for this movie were struck to the traditional golden border (for dupattas), he added some twist to them. He had induced netted fabric, as it is seen in one of Deepika’s song sequence.

My personal favorite from the movie is where Deepika’s dupatta is seen pinned up to the skirt (a purple half saree) so elegantly.

Since, the script demanded this look, the actress had no option but to put on this traditional outfit for her movie. But this outfit is slowly paving its way to Indian fashion domain. Leaving back Bollywood, let me focus on our fashion industry.

Half Saree and Designers

From Sabyasachi Mukherji’s showcase at PCJ Delhi Couture Week 2012 and Lakmé Fashion Week Summer Resort 2013 to JJ Valaya’s designs at India Bridal Fashion Week 2012, there seems to be an increase in urban interest in the half saree.

Quite recently, this ethnic wear of skirt and dupatta has not only been making a steady comeback into the wardrobes of young South Indian women, but they are now adored by Bollywood celebs as well.

Thanks to designers like Sabyasachi and JJ Valaya, who have taken this saree to the next level. Because of their sincere efforts, the half saree is now seen oversees as well.

How can we forget our ravishing Madhuri Dixit. When Madhuri returned India, she rejoiced every Indian heart as finally we got back our Dhak Dhak girl. Her small screen appearances have always been a delight to watch for, but when she performed in IIFA 2013, she set the stage on fire.

She wore two half sarees with different colored skirts – one in yellow and the other in red. She sizzled in this South Indian attire.

With so many appearances of half saree, let’s wait and watch if it’s going to become an integral part of Indian fashion domain, whilst we savor the on-going Lakme Fashion Week Winter/Festive 2013.
Hope you enjoyed this post!

Save Your Money, Christian Louboutin Will Be Launching 36 Lipsticks!!!

How To Lose 40 Pounds In 2 Months Fast

Important Points to Keep in Mind While Shopping for Cosmetics

Fashionlady - September 24, 2014 0
Every company boasts of having the best range of cosmetics. Now consumers like us naturally get puzzled as to which product to go far....