Indian Fashion Blog
Home Lifestyle Most Expensive Shoes In The World – Most Beautiful Shoes Ever!

Many high-end designers have been inspired by various celebrities, iconic products, classic designs and much more to make these special shoes that cost more than a million bucks! 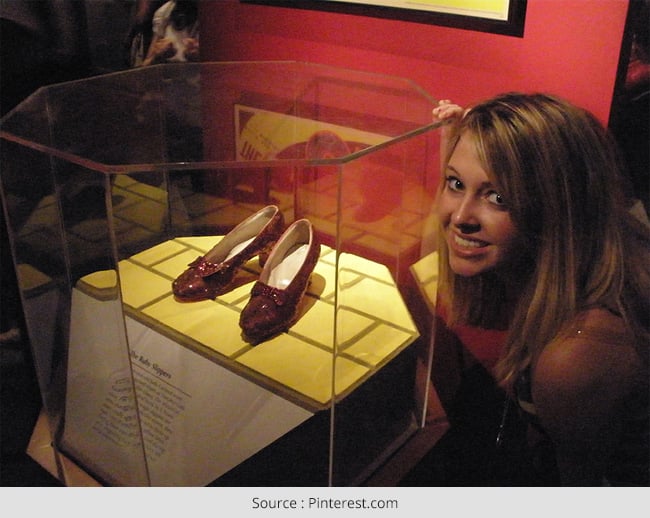 We really wonder who those unknown people are, who have already bought many of these at auctions or across the counters.

Never-the-less, let’s look at some of the most expensive shoes in the world and brands who have made it to our elaborate list.

Here are the Top 10 Most Expensive Footwear Styles

The musical fantasy film admired by almost everyone, The Wizard of Oz, released in 1939 was made by Metro Goldwin Mayer who was inspired by the novel, The Wonderful Wizard of Oz by L. Frank Baum.

History of the Ruby Slippers

A number of slippers were made by the then famous Chief Designer Gilbert Adrain before the final one was selected for the movie. As compared to the book, Dorthy’s silver slippers were made into ruby slippers. All of them were stored with the massive collection of other costumes designes and worn in the movie. While many of these were sold at an auction a few years later, one pair still seems to be missing.

The Ruby Slippers by Ronald Winston

Fifty years after the production of the movie, Ronald Winston decided to recreate the ruby slippers, this time using rubies and diamonds instead of sequins. A dedication of two months’ time using 4600 rubies and 50 carat diamonds, a stunning pair of glittering shoes were created. After about 60 days, these were unveiled at the “House of the Harry Winston” with a price tag of only US $3 Million attached to it.

The next of the most expensive footwear styles in the world are the Rita Hayworth heels.

Rita Hayworth was the inspiration for Stuart Weitzman’s most unique collection of heels in a very unusual chocolate brown color. It is surprising to see Stuart create something different apart from the usual bold and bright colors and designs that he is usually known to make.

The burnt sienna satin peep toe shoes show off a beautiful satin flower on each shoe that cradles an earring in diamonds, sapphires and rubies that belonged to Rita Hayworth.

Inspired by everyone’s favorite fairy tale story, Staurt left no stone unturned when he decided to make a classic pair of “Cinderella Slippers” that looked like they were brought right out from the fantasy world.

The slippers were made using Italian leather with about 565 Kwait diamonds fitted onto it in a platinum setting. The heels were designed to perfection. The lace-like design on the ankle straps makes the pair look most beautiful.

Look what comes out when an established high-end jewelry designer, Eddie Le Vian of France and an awesome shoe designer come together? Their combined effort is seen in this masterpiece created out of silver leather encrusted with tanzanite and diamond crystals.

The front straps of the heels have 28 carat diamonds while the ankle strap, looks more like a royal necklace is made from 200 carats of Tanzanite gems and 16 carats of other stones. Overall, this pair of shoes has 595 carats of diamonds studded on them.

Although this pair has also been made to be worn at the Oscars, no celebrity has yet worn them on the Red Carpet.

Made one of a kind in 2002 by Stuart Weitzman, this stunning pair is made using platinum fabric with 464 Kwait diamonds set with real platinum threads. The diamonds consist of both pear and round shaped stones place intricately, making this pair cost a crazy $1.9 Million.
[sc:mediad]
Did you know – Laura Harring wore this most expensive shoe, the stiletto, at the Academy Awards who was accompanied by 3 personal bodyguards to protect herself and the shoes!

In order to celebrate the 10th Anniversary of the Platinum Guild Shoes, Stuart created another similar shoe in 2012, this time using Swarovski crystals instead of Kwait Diamonds. Compared to $1.9 Million, the latest pair costs ONLY $595.

After Ronald Winston, Stuart took upon him to create his version of the “Ruby Slippers” that were depicted in the movie, Wizard of Oz.

The stunning ruby slippers are made from 642 oval and round Burma rubies that are embedded in red satin. The insoles are made in cherry red. The total weight of the rubies is a whopping 123.33 carats on a platinum that weights half a pound.

While these were supposed to walk the Red Carpet during the 2003 Academy Awards, were later decided to cancel the plan due to the on-going Iraq war. Later that same year, these ruby heels were unveiled at “Harrods” in London.

1800 Kwait diamonds which equals to almost 100 carats is what makes this beautiful Rose Pumps look complete. A classic design show with simple T – strap and a great out-of-the-box idea to make elaborate roses placed at the toe is a true invention which is extremely unique from the rest. The retro look with traditional straps

The 71 year old Shoe Designer sure knows how to make women swoon with his admired collection.

This shoe uses the earrings worn by Marilyn Monroe which inspires Stuart Weitzman once again to make a fabulous creation, this time using Swarovski crystals.

Regina King wore the shoes at the 2005 Oscars when she was nominated for the movie, “Ray”.

Post the award ceremony, the earrings were replaced with replicas and the originals were sold at an auction for $1 Million!!

The original slippers out of which few were sold at an auction, another still remains in Washington for you to see. If you love sequins and vintage collections, nothing can stop you from buying these at only $612,000.

Which woman wouldn’t dream to have 1420 diamonds on her feet?

Yes! Stuart Weitzman collaborated with Kwait to make this stunning pair of Diamond Dream Shoes with diamonds beautifully placed around the ankles.

Stuart Weitzman has a knack to make the best shoes and is now competing with the leading shoe manufacturers in the luxury category. Have you watched the new ad by Kate Moss who is the official brand ambassador for Stuart Weitzman. If not, watch the video “Made for Walking” below:

While we have looked at some really expensive shoes which most of us could only dream of owning, let’s also look at some leading luxury shoes brands that we could still consider buying if we are a little rich than the richest.

These join the bandwagon of one of the most expensive shoe brands because they are made of the exotic materials. The most expensive Manolo is the Blaxia alligator made from the alligator skin available for a little more than $4000

The “Iconic” collection from Jimmy Choo costs about $3785 making it the most expensive in the brand’s collections from the year 2011.

Mostly, the Hollywood celebs are seen wearing these on the Red Carpet events and premier shows.

Continue reading to see some of the most expensive shoe brands.

The iconic red soles and high heels is how this brand can be best described. The most expensive of Christian Louboutin shoes are the Sexy Strass that costs only $3,095.

This crystal peep toe has a heel of 4.5” with a heel that can rip the ground. The real black diamonds are the purest of the kinds available.

Colorful, unique, crazy, sought-after, amazing, stunning, beautiful are the words that describe the brand. Curvy heels are the specialty here and these just cannot be missed by any eyes.

Having so many qualities and a unique exclusive design, it is obvious that these will cost anywhere from $500 to a couple of thousands.

Trendy and adventurous is what you have to be to wear this brand. A shoe that combines

16th century design and 21st century style is what makes Alexander McQueen different. His range starts from $500 and trust us, you wouldn’t mind paying a bigger too if you really wished to own a pair by the brand.

Phew!! Aren’t they lovely? Which of these most expensive shoes do you wish to own?

The Best Way To Remove Makeup

Take Away Snippets Of Weekend Fashion For Fun And Glamour

Nina Davuluri: The New Miss America Has Stunned The World