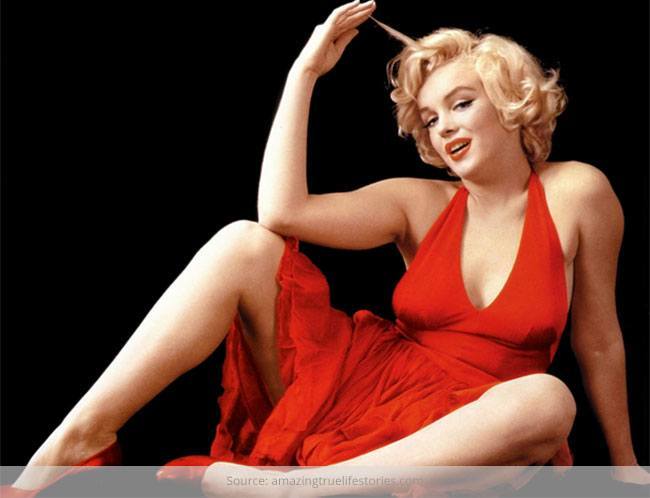 Whether it’s her iconic Seven year Itch dress, peroxide blonde hair or her seductive red pouts, Marilyn Monroe was a symbol of glamour. And her untimely death only at the age of 36 made her an eternal beauty symbol. While her fans were in awe of her charm, everyone wanted to know her best kept secrets about her beauty. In this post I am going to share Top 5 Marilyn Monroe’s beauty tips.

A decade before her death, Marilyn had shared some tips from her beauty ritual book with the US magazine, Pageant.

On her enormous popularity, Marilyn had once said,

“Frankly, I’ve never considered my own figure so exceptional; until quite recently, I seldom gave it any thought at all.”

Marilyn Monroe was as popular for her flirtatious on-screen roles as for her radiant face. Her skincare regime book reveals the damsel used to apply hormone cream to her face.

She would mix Active pHelityl Cream with a powder foundation so as to create a radiant base that gave her a shiny face on camera. However, this trick had its own downside. Because of this, she had grown a fine layer of blonde hair over her face. Even though she was suggested to shave it off, she didn’t as she believed it added glow to her face in photographs.

We do not suggest you to apply hormone cream, but you can create that effect by mixing a pearlescent primer with a liquid/cream foundation.

2. Dye hair with a light shade

Marilyn’s original hair color was brownish-red, but she always preferred a blonde look. Marilyn had bleached her hair in her modeling days itself and stuck with that hair dye till her death. Her hair stylist Pearl Porterfield gave Monroe her signature platinum curls. He had used peroxide to bleach the diva’s locks.

[Also Read: How To Bleach Eyebrows]

Well, you do not have to now follow this retro trick instead you can pick an ammonia free hair dye from the market that is safe for your hair.

In order to get moisturized skin, it’s necessary that your body is hydrated. By this, your body retains its natural softness. Marilyn always made sure that she wore moisturizer day and night to avoid dryness. As per her, she carried a tube of moisturizer along-with her so that she could slather it on her skin anytime.

Erno Laszlo Phormula 3-9 Repair Balm is still available in the market, which you can give a try.

Marilyn is still referred as ‘sex symbol’. No other actress could define romance as Marilyn did both on and off screens. Marilyn always preferred a dash of red on her pouts which absolutely complimented her undertone and not to mention her beauty spot.

In order to honor this style icon on her 50th death anniversary, M.A.C had launched a limited edition of red lipstick along-with orange reds that were instantly sold out.

Marilyn used to give equal importance to all her features. Arched eyebrows have always been helpful in defining the face profile. Marilyn too flaunted sassy arched brows. If you too want to get such brows then you can take help of a brow stencils which can help you get the curve.

Hope this post on Top 5 Marilyn Monroe’s beauty tips that are all-purpose even after 50 years was useful for you!

Make Your Own Multigrain Body Scrub

Stay Ahead In The Fashion Race With Digital Print Sarees

Fashionlady - October 1, 2015 0
Cocktail dressing can become a statement if you put the right fashion inputs in it. There are the conventional sarees, designer anarkalis, even breezy...