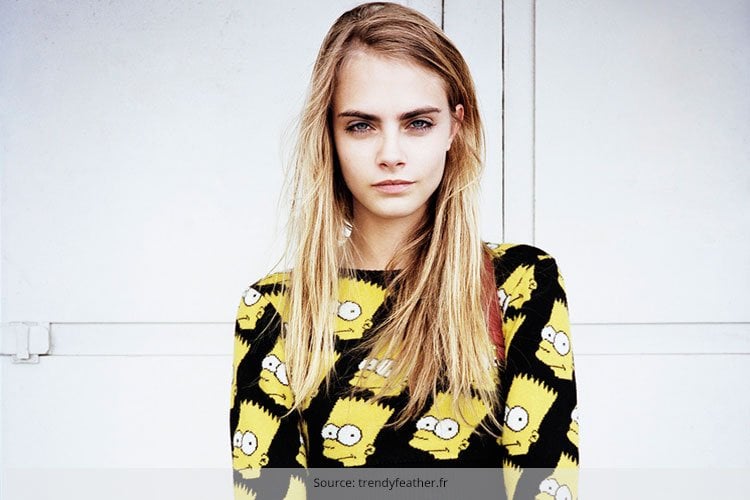 The world cannot get enough of the golden girl Cara Delevigne. The young supermodel is growing popular day by day and even the internet can’t stop raving about her. She is adorable and successful and it’s hard not to laugh with her or at her. Every young girl aspires to be like her-sassy and in-your-face weird. Here are 10 times Cara Delevingne gave a whole new meaning to the word “Cool”.

Unlike all most supermodels, Cara does not shy away from food! She loves eating and her social media accounts mirror her love for food. Even before she walked the ramp for a Victoria’s Secret Fashion Show, she was seen gorging on bacon. The woman loves her bacon and doesn’t shy away even if she has to walk the ramp in a bikini! Now that’s our girl! She even has a tattoo that says BACON!

2. Her nickname is MONSTER

Now who wouldn’t love an adorable little MONSTER? Just like her quirky self, she has an equally quirky family pet name.

The most popular game in 2013 actually features Cara! Now how cool can that be? The popular game has Cara appearing as a radio presenter. If you have played the game, then you will realize that she is the voice of Non Stop Pop FM, one of the channels that play when you are in Los Santos.

4. Her Tattoo Game is On Point

Cara’s tattoo game is too strong. So, whether she is getting a tattoo for her love of bacon or a tattoo saying ‘Made in England’, Cara has some of the nicest and quirkiest tattoos around town. She even has a lion tattoo on her finger. Her tattoo choices are not something she did to rebel during her teens, but instead are very smart choices.

5. Her Eyebrow Game is Really on Fleek

It was probably Cara only who brought the bushy eyebrow trend back to fashion. When women around the world were going thin, Cara decided to bring the unkempt look back in fashion. Her eyebrows are dark, strong and well-groomed. They are real trendsetters and have rocked on ever since she started sporting them.

7. She actually hangs out with the COOL crowd

When it comes to having a celebrity friend, Cara has them all! The model can be seen hanging out with only the crème de la crème of the industry. So, whether it is Karlie Kloss or Rita Ora, Cara is never seen hanging out alone.

Unlike most models that may not be so proficient in singing their hearts out, Miss Cara can actually sing! In fact, this young model also plays the drums pretty well!

9. Her Photo Face is Very ‘Photogenic’

Cara is not like her prim and proper model sisters. In fact, she has the widest array of faces for photographs. She can roll her eyes, her tongues and can make the best and worst of faces, she never shies away! Go Cara!

What we love most about Cara is that she is such a downright weirdo. She never shies away from embracing her weird and quirky style and her antics. She is refreshingly weird and we love her!

Awesome Ways On How To Wear A Cape Or Cape Embossed...

Different Ways On How To Use Concealer

Things You Must Invest In As You Reach Early 20’s

Manish Malhotra’s 50th Birthday Was All About Good Looks

Fashionlady - December 7, 2016 0
Hold on ladies, because the man who still exudes that one of a kind boyish charm just turned 50 and his big fat birthday...