Besides all the promotional activities and events that took place during the weekend, it was the Indian Film Festival of Melbourne 2018 that took our undivided attention. Divalicious As It Can Be:

Breath-taking were the divas of B-town who graced the event and spilled their magic all around. We have managed to put together their style stories for your delight. Take a look-

Freida brought beauty to solid-colored fashion with two of her styles at the Indian Film Festival of Melbourne. To the opening press meet, the diva picked a blue jumpsuit from Elie Saab label and the lace neckline sure added texture to her style. Red matte finished lips and wavy hair rounded her stunning style. 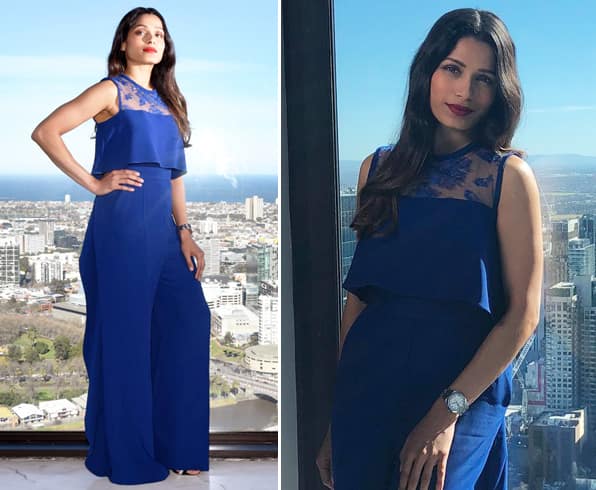 To the screening of her movie, Love Sonia, she picked a sizzling red one-shouldered ruffle dress by Elie Saab. With a side-parted sleek ponytail, red hot lips, she upped her style game. 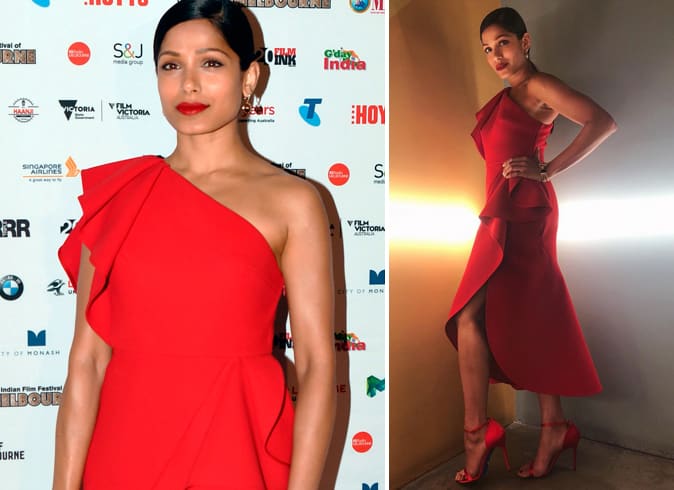 For the grand event, she chose to go again with Elie Saab Couture but in a printed fashion. Although the outfit seemed too loaded with the velvet oversized bow tie, the diva carried with sheer elegance. For a day event in Melbourne, Rani Mukerji was spotted doing a dreamy floral prints outfit in ivory by Sabyasachi. Adding pearl to her style and with clear round rimmed shades, a small bindi, and soft hairdo, she was simple yet magnetic. 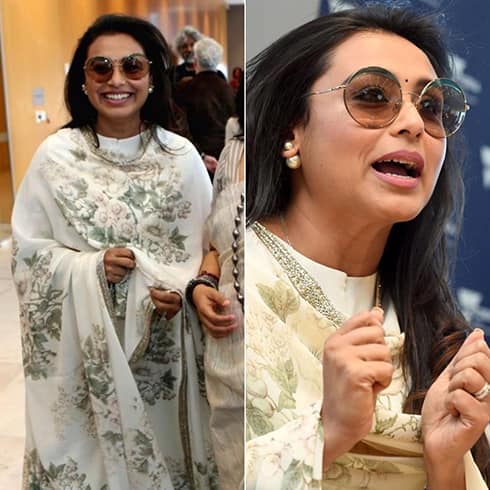 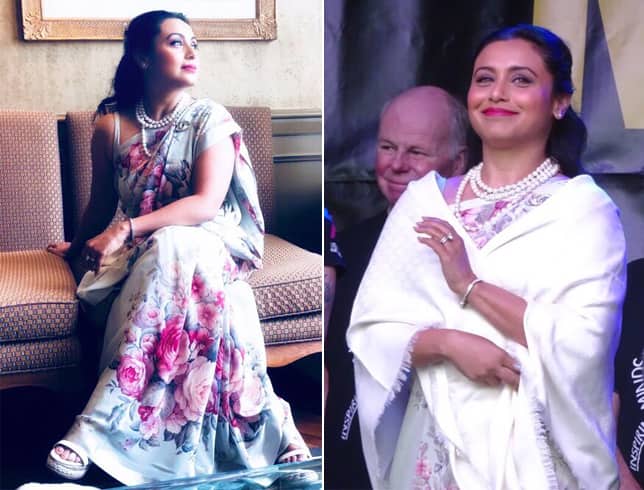 The south Indian actress, Keerthy Suresh, who earned quite a fame with her spectacular performance in Mahanati, graced the Indian Film Festival of Melbourne. She was spotted doing sari styles with statement jewelry pieces and she nailed it all. From a traditional sari style to a trendy one, her transition was smooth and infallible. The veteran actress and TV show host, Simi Garewal, was spotted at the Indian Film Festival of Melbourne in a Karleo tiered white outfit. The fur patterned cape gave her style an angelic feel. With red lips, straight hair, dazzling pieces of jewels and a glittery clutch, she rounded her style. 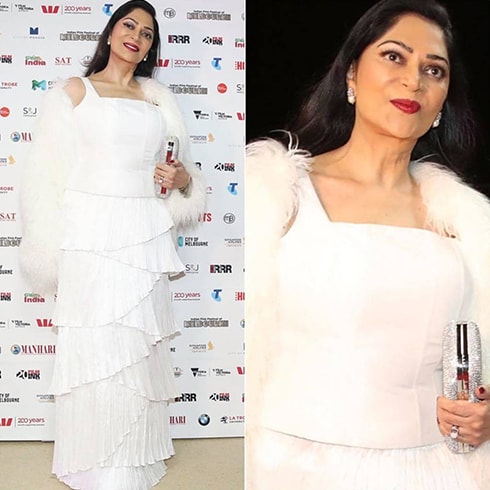 One of the celebrities who were in attendance to the IFFM 2018 was Malaika Arora. The diva was seen sporting a pastel-colored House of Kotwara lehenga style with statement jewelry from Apala by Sumit. Glossy lips, luscious lashes, and an updo finished out her effortless yet elegant style. 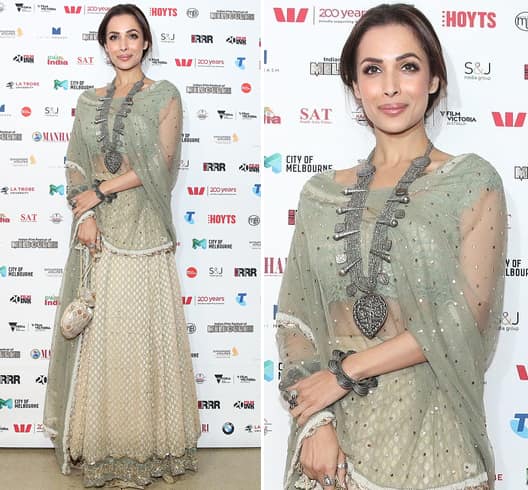 She helped judge a dance contest at the Indian Film Festival of Melbourne, for which, she chose to go trendy in an Anamika Khanna label. While we were already stumped by the creativity of the outfit, we can’t deny that the choice of beaded jewelry from Apala by Sumit surprised us more. But the diva carried it with impeccable beauty and elegance. 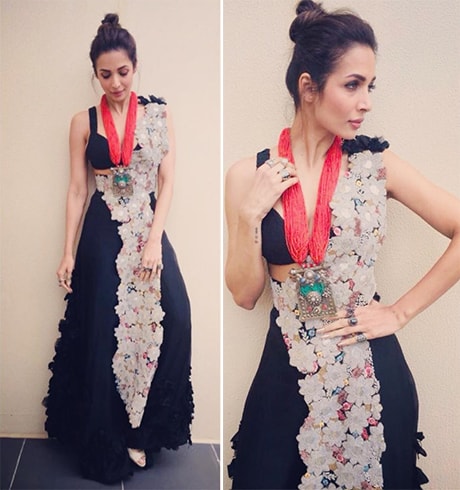 One celebrity among the Bollywood, who besides her choice of roles in the films has surprised us with her fashion takes was Richa Chadda. The diva was spotted at the IFFM 2018 doing a series of spectacular styles worth noting down.

She rocked a trendy sari style in gradient shades by Sreyasamanta with Amrapali jewelry. With her hair swept to one side, nude makeup and a small bindi, she looked glamorous. 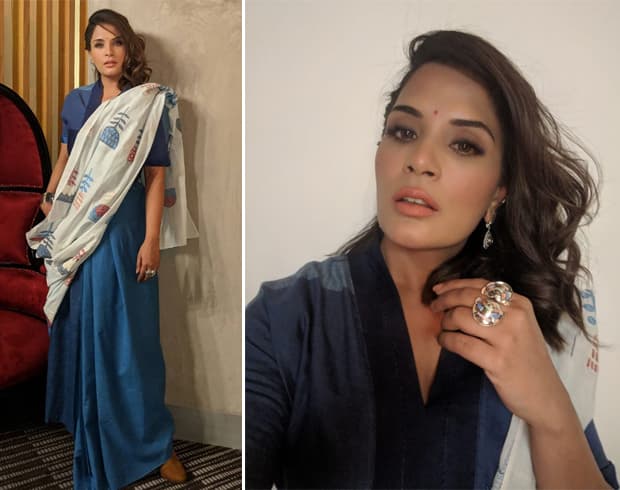 She was spotted having a fun time in Melbourne clad in a Raw Mango color blocking crisp outfit. Jewels by Amrapali and Azotiique beautified her style further. The streak wavy hair, smokey shimmer eyes were added a bonus to her killer style. 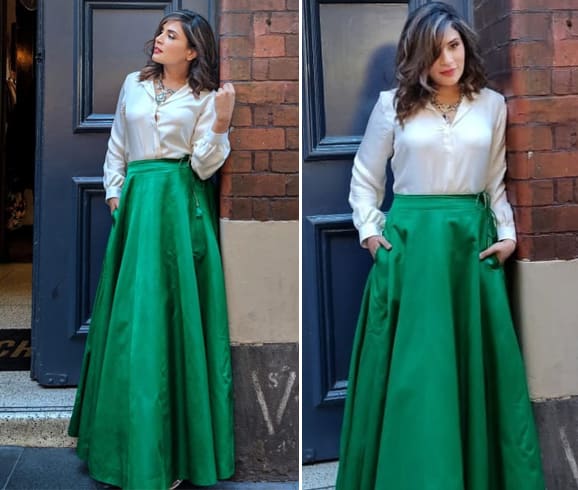 Lastly to the grand event, she rocked a shimmering style by Namrata Joshipura. Azotiique jewelry and Louboutin shoes were her choices of accessories and it sure worked like a charm. 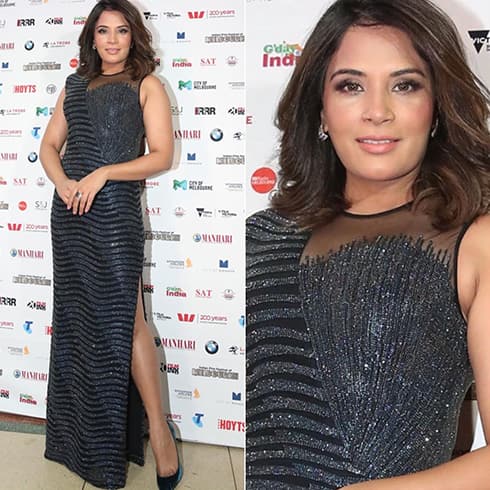 Glam Up Your Boring Outfit with Some Season’s Trending Accessories