At the Taj Mahal Palace in Mumbai, the fashion world gleamed in the spotlight of the HT Most Stylish Awards 2016. Gracing the event were many stars and starlets of the B-World looking painstakingly gorgeous. Take a walk down the road of the fashion oriented evening here:

On losing scads of plump, Parineeti is setting the fashion trends high and insurmountable. While at TOIFA awards, she dressed all pretty and girly in gowns, for HT Awards she kept her look raunchy and racy. She was spotted in a blazar-esque outfit from Intrinsic.

It seems like the Louboutin World have stolen her heart with their clutches and she styled further with a Ateliermon ring. It very rare to see our celebs in such high heels, but this diva looks comfortable and stylish in the Asos sandals.

She kept her eyes black and her lip smooth red. Sanjana Batra did an amazing job with her hair leaving it messy and ruffled. Bagging the ‘Most Stylish Youth Icon Female’ award, she did total justice to the title. 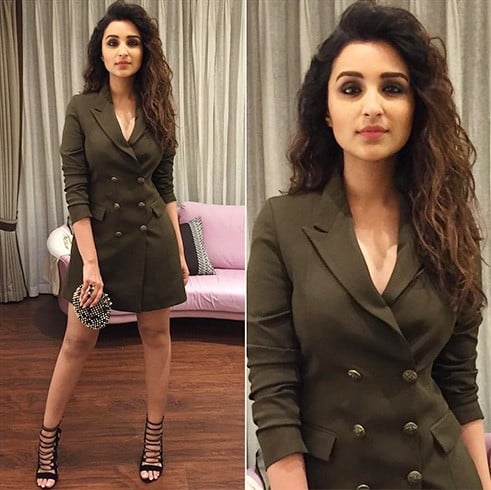 Katrina who nailed the ‘Most Stylish Actress’ award dressed in style in a strapless Antonio Grimaldo cream dress. The neat knife pleats of the dress looked splendid on her and dindn’t require her to accessorize any further.

She completed the outfit with studded Louboutin shoes. Keeping her makeup glossy, she tied her hair into a half bun swaying from her usual hue. After being crowned with the ‘Style Icon’ award at the AsiaSpa Awards, walking the ramp for Namrata Joshipura at the AIFW’16 and becoming a noticeable figure in the world of Fashion, she was titled ‘Most Stylish Newcomer’ at the HT awards. 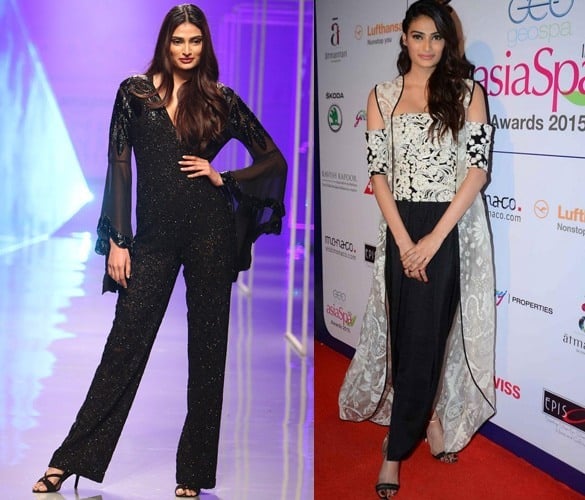 She dressed to perfection in a Kanika Goyal monotone asymmetrical duo lapel suit for the HT awards. The black drops of the necklace very creatively drew attention to the well carved cleavage bearing top. She slid into pointy black pumps completing her look. Her makeup and hairdo are done flawlessly by Ami. Spotted again in limelight was Alia Bhatt. Her stylish appearances have gone quite viral and brought her ‘Reader’s Choice Female’ award. She picked a Georges Hobeika dress for the occasion. The outfit looks lively with its colors and glossy fabric look. Taking a soft tone with her makeup and accessorizing minimum, she looks beautiful. Matching the shade of the belt, she picked her pink pumps to go along. The mid parted sleek hair hue is very different and quite simple compared to what she has been flaunting at her movie promotions. Going all prints was Kalki in a Masaba suit for the HT awards event. The designer and the actress have both gone AWOL for a while now. It’s a warming sight to spot this combination. Keeping it all pink she looked like a pink panther. The long dangler for earrings played well with the high knotted hair do. The white sandals went along with the outfit quite charmingly. The miniature of Fashion, Malaika Arora Khan who recently walked the ramp for Mandira Wirk at AIFW’16 was spotted at the HT awards. The bold model clad herself in a Diogo Miranda dress. The thigh high slit that ran in the middle along with the deep cleavage line showcases the dauntlessness of the actress. 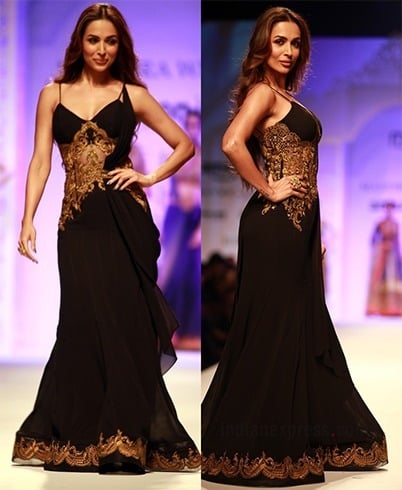 She kept her Leiber clutch and ankle strap Zanotti sandals black and pulled back her hair into a neat pony tail. The puffed sleeves gave the outfit a boxy look. Manicured in blue she added with a Maheep Kapoor for Satyani ring as the accessory of the evening. She locked her guise with simple makeup with an orange bronzer. Sonam was spotted at the HT awards looking sheer magical, styled by her sister Rhea Kapoor again. The sisters are making an amazing duo playing fashion on their fingertips. She picked a Ashi Studio black laced outfit. The gown though long revealed the beauty’s curves and highlights through its sheer texture.

She added simple black sandals and white studs. Lost in the darkness of the dress was a Corto Moltedo clutch in black again. Keeping her face well contoured and pulling her hair back nice and sleek, Rhea finished Sonam’s look in elegance. Got a favorite? Tell us in comments below.

Latest Flower Rangoli Designs 2021: That Will Steal Your Heart Away!

Fashion Essentials That You Should Stock Up For Summer

All The Help You Need With Co Washing Hair Techniques

Fashionlady - September 30, 2016 0
No Indian culture is so vibrant with color, joy and naughtiness than Navratri. And chaniya choli is that special dress which adds gorgeous festive...