WIth the Parmanu promotions in full swing, lead actress Diana Penty is back on our radar. The movie, based on the Pokhran nuclear bomb test, presents to the audiences all the hidden facts and failures of the test, along with bringing to limelight the unsung heroes of the experiment who helped the nation to be recognized as a global nuclear superpower. Amidst all her promotional looks, Diana gave us a break with a photo shoot for the Brides Today magazine. Dressed up in glittering lehengas from designer Abhinav Mishra, Diana played a fitting muse to the designer, whose vision of a modern-day bride is to be fun and fabulous. With the sole objective of blurring the line between a traditional bride and today’s trendy bride, every outfit redefined bridal couture in a more contemporary way.

Scroll further down to see the top 3 looks from Diana Penty’s photoshoot for Brides Today Magazine.

Dusted with white gold was this look Diana carried for the June issue. Dressed up in a gold lehenga from designer label Abhinav Mishra, Diana made for an ethereal bride. The lehenga glittered with gold and antique sequence, spread only to be further lit up with the bright gold dupatta and blouse. While the scatters on the dupatta added to the elegance, the juttis from Needledust gave her reasons to dance the night away.

The diamond and emerald necklace adorned Diana’s neck, gave a regal angle to her demeanour. Hair and makeup expert, Namrata Soni, opted for a muted face and naturally falling tresses on one shoulder. 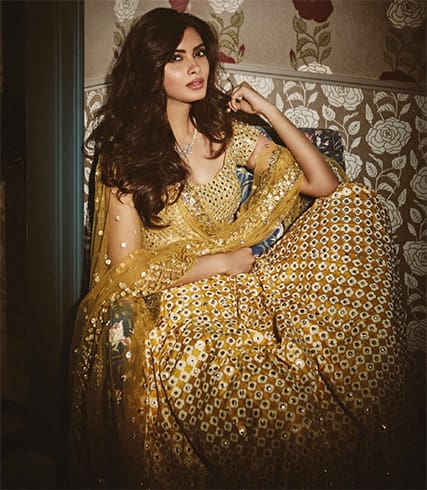 Settled in a corner, this look had Diana wear a mustard lehenga from the label, Abhinav Mishra. Complementing the overall shine on the print was the soft mustard dupatta that boasted of scatters moving from dense along the edges to sparse towards the centre. 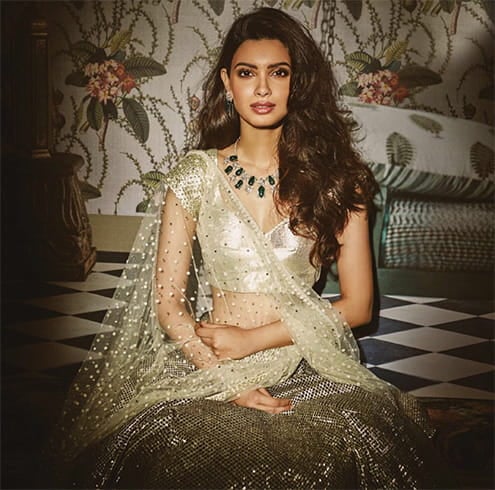 Ivory is the color for weddings this season and brides ain’t shying away to wear them anymore. Presenting a regal ivory look, Diana wore a glamorous ivory kurta and lehenga set that glittered all the way. The long kurta was sealed with a heavy Gota lace, while the lehenga too ended on a beaming gota note. 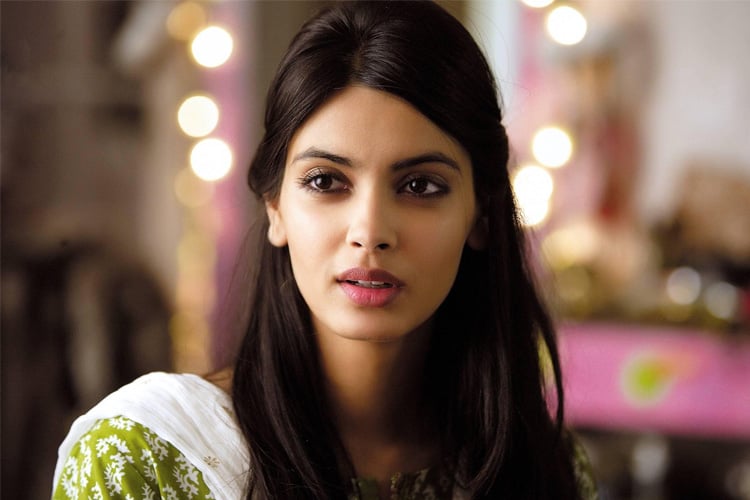 Rumor has it, Diana Penty was going around with Harsh Sagar, a businessman 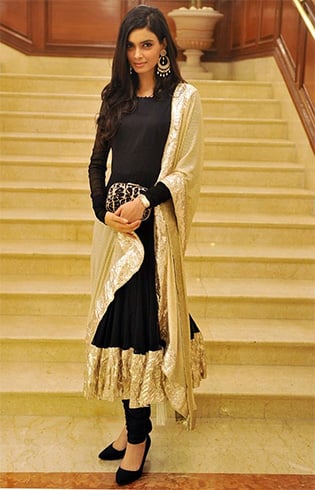 Net Worth: not given 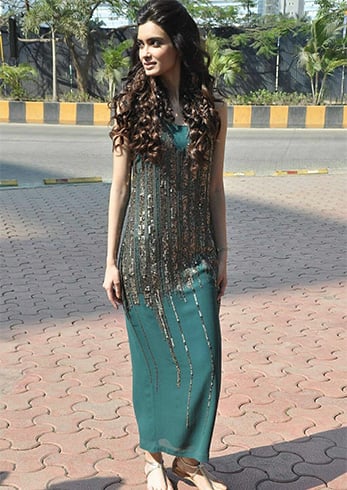 Know more facts? Write in and we would love to share it with the world! 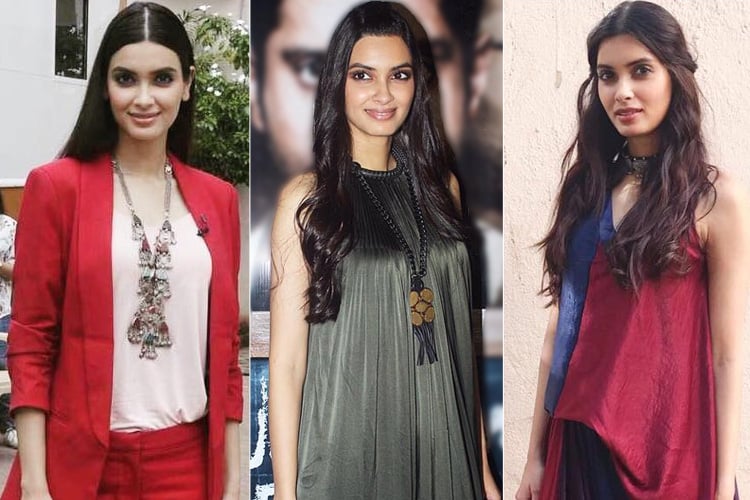 Being a keen observant of Diana Penty’s latest styles, we have drawn a conclusion that the lady plays the Indo-western fashion theme splendidly.

Her styles have been not just been versatile but also fashionable in every tone. Here is a pool of her latest appearances, dig in! 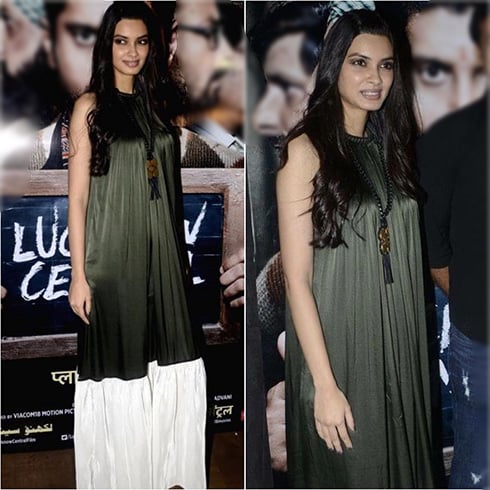 Drapes are the perfect way of playing the Indo-western theme and Diana nailed it in color-blocking drapes outfit by Urvashi Joneja. By adding Ritika Sachdeva choker, she kept the look captivating. Half pinned, wavy hairdo and smokey eyes sweetened the style without much hassle. Diana was spotted doing a smart, uptown look in H&M red pant suit. While the Intoto beige sandals complemented her chic avatar, the vintage Kaiser neck piece from Aaraa by Avantika Jewellery added the boho chic twist to her classy style. All in all, along with smokey eyes and straight soft hair, the diva slayed the style royally. 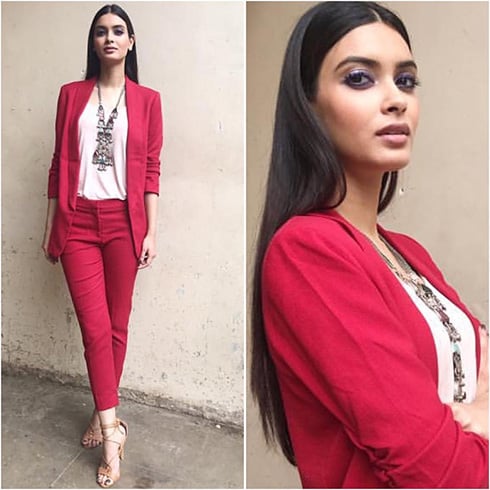 Nidhi Jacob, the stylist along with the assistance of Divya Bavalia and Kritika Gill, the makeup artist, crafted the best looks of the wonderful actress, Diana. Diana Penty strengthened her stand in the Bollywood with her talent and persona and she has been a delight to follow on the social media. Being an ardent fan, we always kept a close tab on her appearances and thoroughly admit loving her wondrous styles.

Since an upcoming film titled ‘Lucknow Central’ is in her basket, she has been making appearances quite a bit promoting her film. Here are 3 simple yet stunning styles of the diva that our shutterbugs were excited to capture- 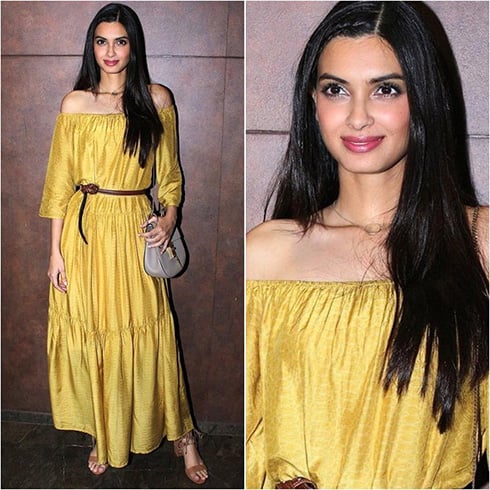 Cream lace high necked top and floral asymmetric skirt by Sahil Kochar was Diana Penty’s choice of outfit for one of the promotional event. Miss match earrings from Swarovski and nude heels were her only pair of accessories. With a braided half hair band hairdo, she looked sweet and adorable. 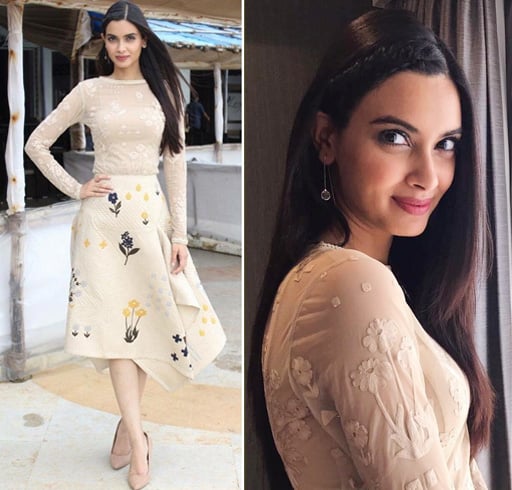 In a falling material white, cold shoulder maxi dress by Varun Bahl, Diana looked dreamy and princess like. The embellished halter neckline and waistline sufficed for the need for accessories perfectly. Tying up her mid-parted hair and with glowing makeup, Diana kept her beauty game racing. Love her simple minimalist styles? We certainly do! 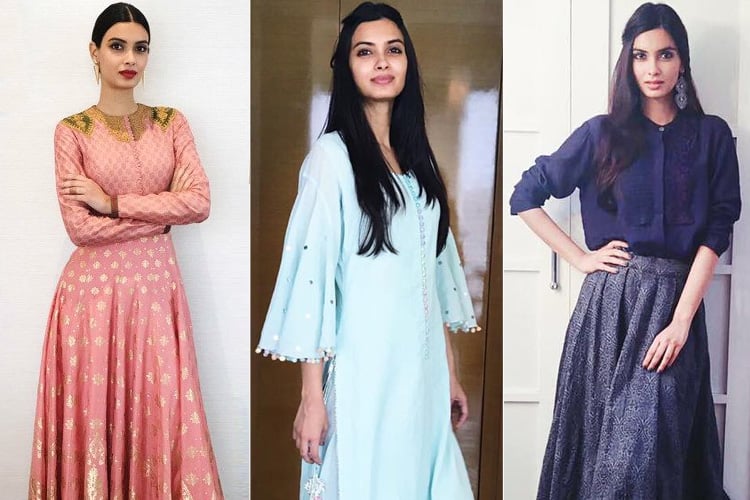 Amidst the bucket of entertaining films that are yet to be released, there is one we are eagerly waiting for. Any guesses? It is the Lucknow Central starring Farhan Akhtar and Diana Penty.

Keeping a tab on every feed and update of the upcoming film, we captured the best of Diana Penty’s promotional styles. Looks like mini outfits are out of fashion and are delicately replaced by long, easy breezy apparels.

It’s fascinating that we could link every delightful appearance of the diva to the pleasant nature. So dive into decode some relaxing styles-

In a softly toned garden print outfit by Ridhi Mehra, Diana looked absolutely adorable. As delicate and graceful as a feather, Diana melted our hearts with her presence. Opting for a minimalist approach with simple tan colored Intoto sandals, red pout and half pinned wavy hair, she looked spectacular. 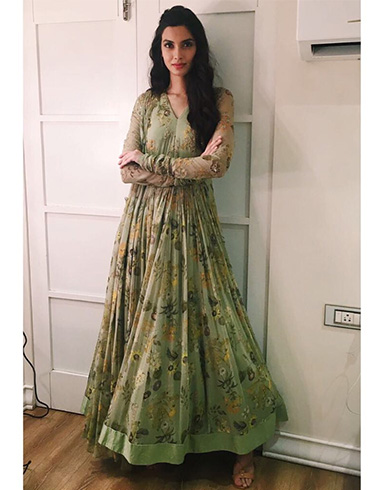 Like a soothing clear sky was Diana Penty in a Sukriti & Aakriti easy breezy outfit during one of the promotional events. The soft colored tassels along the side and the white tassels along the hemline added a sweet vibe to her look. Fizzy Goblet floral juttis, half pinned straight soft hair and crystal clear makeup rounded her style. Diana Penty looked as pretty as a rose in a blush colored Rimple & Harpreet Narula ethnic outfit during one of the promotional events. The gold mica prints on the outfit was well complemented with gold toned Fizzy Goblet juttis. Sleek mid parted hairdo and red pout closed her beauty game. 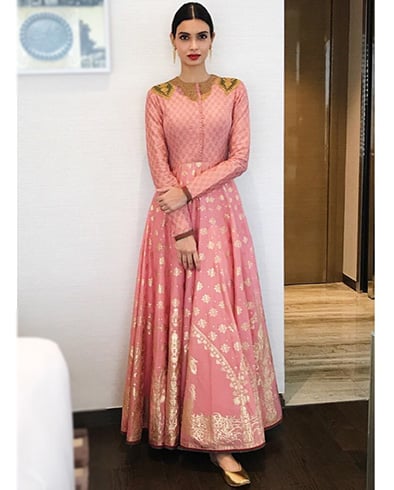 With every style, Diana proved that mini dresses are not the only option to look fashionable and enticing. In a midnight blue separates from Jade by Monica and Karishma, she looked fancy and glamorous. Needledust juttis, Ritika Sachdeva metallic earrings played beautifully along with her style. Half pinned straight soft hair, smokey blue eyes, and perfectly highlighted makeup, she was simple yet impressive. Hope you enjoyed the pleasant styles crafted by Nidhi Jacob and exhibited by our darling diva, Diana Penty. While out and about for the shoot of her upcoming venture, Parmanu, Diana Penty opted for cool, refreshing summer look. She brought all the favorite summer colors into one style and knocked us off our feet.

Diana picked an easy breezy white kurta with golden floral print on one side along with spacious blue straight pants from Payal Khandwala. Since the neckline of the outfit was high, she skipped the accessories game and that was definitely a smart choice. All she needed to nail the look was a pair of flats, classy shades, and a roomy handbag. Soft half pinned tresses, red matte lips with minimal makeup kept her cool, chic look unfaltering and impressive.

This is one work-to-travel style and Diana is the proof of the thought! Nidhi Jacob, the stylist who goes by the insta name The Hidden Button, is the creative mind behind this lovely, refreshing look. 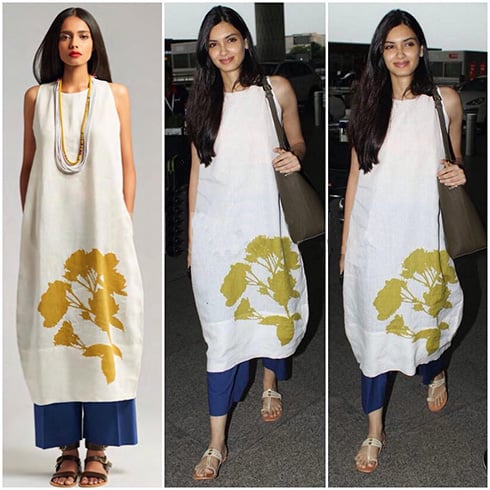 Hope you enjoyed her style!