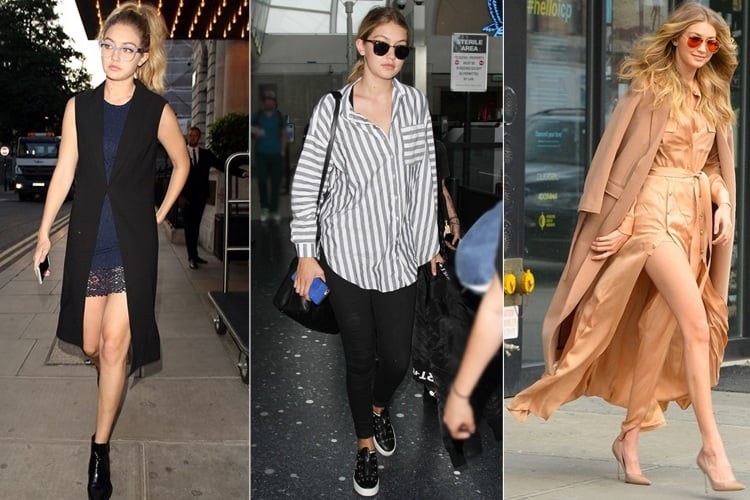 Ever since breaking into the fashion scene in 2011 as the Guess girl, Gigi Hadid has dazzled all with her sunny disposition and bombshell bod and looked complete with long lean legs. Moreover, her personal uniquely individual, cool and eclectic style that shrieks ‘bonafide bombshell’ sets her as a unique start both on red carpet as well as street style. Even outside the runway and red carpet, she rules the ‘off-duty’ looks, perfecting the art of dressing her curves. Let’s draw some inspiration from few of the top Gigi Hadid street style looks and add the oomph factor to your own wardrobe closet!

Leather Miniskirt To Melt All Snowflakes!

This typical Hadid style was spotted on 15th Feb, 2016 as she gives in to her whim for a walk amidst the snow in between her shows during NYFW. Ignoring the chilly weather completely, the model paired her black thigh high suede ‘Highland Boots’ with a leather miniskirt. Note the tights missing! To up the glamour quotient of her sartorial ante, the major black coat, metal adorned belt, a Louis Vuitton handbag and finally the bright blue sunglasses were thrown in to rock an effortless equestrian look. With a simple ponytail to finish the look, the lady certainly knows how to make an all-black ensemble look anything but boring. 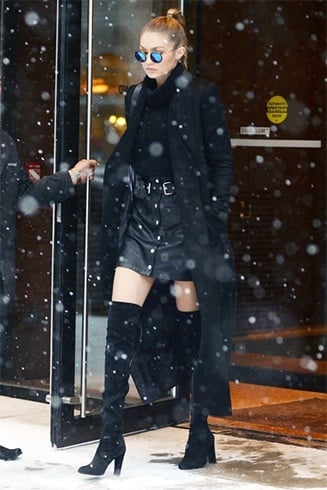 Rendezvous With The Boyfriend

On the way to meet her boyfriend, all that the model needs is a black and white Adidas bomber, simple black tee and sweatpants with white stripes. With white high-top sneakers and the red lips, Gigi Hadid street style fashion comes across as chic, stylish and polished yet laidback and comfortable! 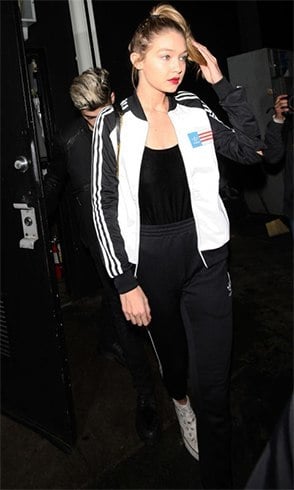 Adorning the all nude-on ensemble of the camel coat thrown over the gorgeous silk dress and pants, the Gigi fashion is oozing the peachy dream vibes. Finishing the monochromatic look with her golden tresses left loose, nude pumps and Mirrored Ray-Ban, the model has successfully made street style dressing Oh-So-Gorg! 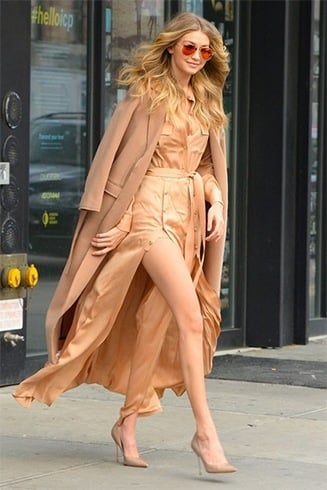 In the balmy Los Angelos, Gigi flaunted the ultimate off-duty outfit. Slipping into her distressed jeans; she paired it with a midriff-baring top, thereby giving it a cool-girl twist. Finishing the outfit with tanned leather bomber and classy brogues, Gigi had nailed the off-duty look. The Knee-boot And Sweater Statement

Gigi had paired a brown knee-length boots with a grey slouchy sweater and a grayish blue hand purse with her hair neatly styled back following the lamp shading trend. While it may look like the dress is not attention seeking, one cannot help but look twice and fall under the spell of the mesmerizing look. Gigi Hadid makeup is minimal which further accentuates her bombshell look. 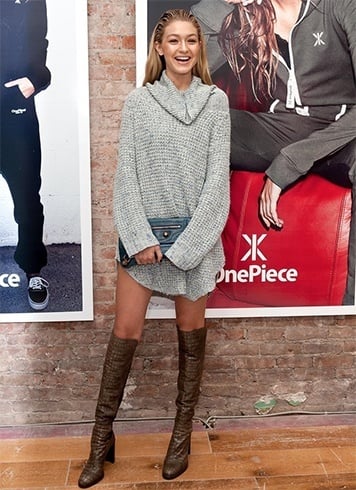 Rocking the head-to-toe white ensemble while meeting her fans in Sydney, she was the ice-cool picture of casual sophistication. Note the glamour quotient upped by the blue streaks in Gigi Hadid hair. No wonder, it soon became a rage! 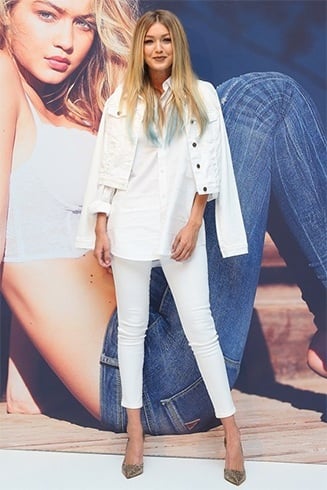 Who would think that a denim jacket, cropped tee and sweat pants can mesh? But trust Gigi to pull it off and look ravishing. With heels and aviator completing the utter comfortable travel attire, Gigi looked super glam as she touched down in Sydney airport. 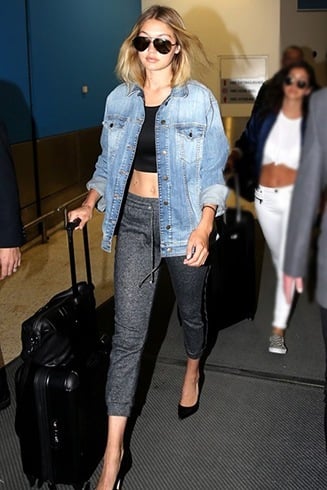 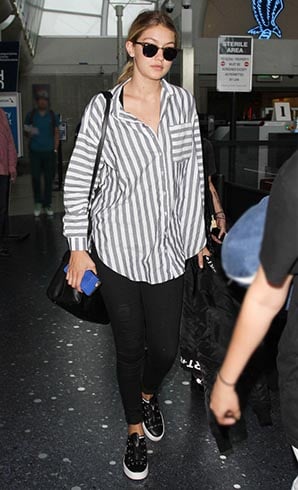 Need a tutorial in color blocking? Check out Gigi stunning all on the streets of SoHo in hot pink pants and glossy leather tops. The dramatic style statement look is completed with turquoise pumps, blue aviators and orange sling. Accessories are perfect to create a gaping color-block look! 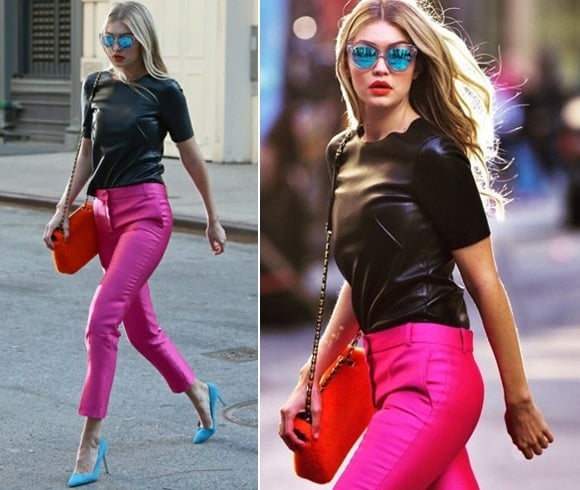 If you thought specs weren’t sexy, think again! Check out Gigi creating shapes with her looks! Out on the streets of London, she styled the navy less mini-dress with black sleeveless jacket and pointed-toe booties matching with the triangle created by the buttoned jacket. However, it’s the big specs that actually clinch the casual glamorous look of the ensemble. 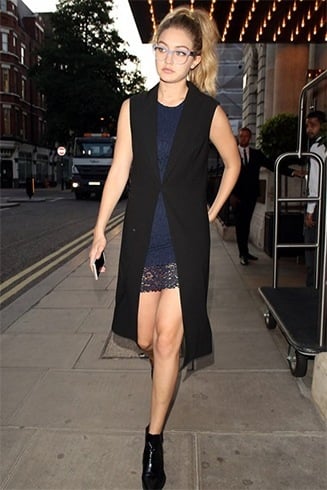 Gigi Hadid had truly mastered the street style look to the core and is a real inspiration for all us women to emulate. Through Gigi Hadid street style looks, her weakness for statement jackets and oxfords are evident but the way she pairs off outfits and accessories are stylishly simple to copy and the effect produced is earth shattering. Gigi Hadid truly is a regal street style icon to draw inspiration from. If you haven’t adorned her style yet, nothing like the moment to start!

Kajal Aggarwal Steals All The Glances With Her Icy Hot Styles

Fashionlady - December 22, 2015 0
The year 2015 gave too many reasons to celebrate. The holy matrimonial alliance of some of our favorite celebrities are few of these. As...