Ladies are ladies, but there is no disputing the charm of the First Ladies. The current fashionista and First Lady Michelle Obama, wife of President Barack Obama, isn’t the first one in the First Ladies to rock the nation and fashion lovers in an inaugural gown.

This privilege has been worn by many ladies, proof of which can be checked out in Smithsonian Museum of American History which shows Inaugural Gowns worn by ladies for over a good 100 years. Take for instance, Jackie Kennedy who was the most fashionable lady in the political arena, considering her daring gown and cape.

This inaugural sleeveless ball gown in red designed by Jason Wu was made of soft, flowy custom chiffon and velvet. It was not only romantic and optimistic, it was a fashion statement in itself. Not only did this Chantilly lace design earn Faircloth accolades, but President Bush looked at wife Laura and said “And my Laura always looks so beautiful.” 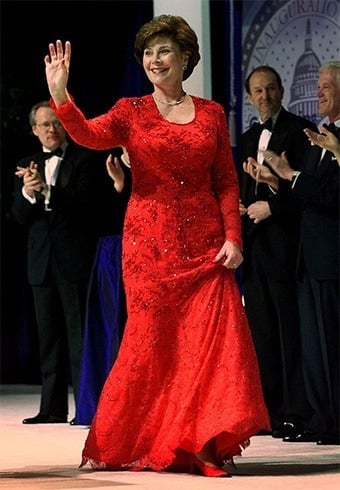 For the 1993 inaugural ball, the First Lady Mrs. Clinton wore a violet lace gown designed by the New York based Sarah Phillips. In her 1989 inaugural gown outing, Mrs. Bush went ahead and selected a sapphire velvet and satin gown designed by Arnold Scaasi. Such was the fondness of Mrs. Bush towards the asymmetrical drape of the gown she wore that she was unwilling to donate it to the Smithsonian Institution as a customary donation. And what did Mrs. Reagan choose for her husband Ronald Reagan’s inaugural ball in the year 1981? A single-shoulder white gown designed by American designer James Galanos, who is widely considered to be one of the world’s foremost 20th century couturiers. 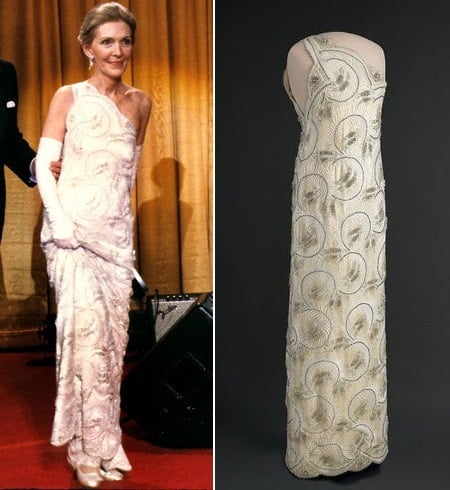 What a stunning element of sophistication this is. In the inaugural gown worn by the First Lady Rosalynn Carter, what keeps you hooked is the gold-embroidered sleeveless coat over a gold-trimmed blue chiffon gown, designed by Mary Matise which was topped with an evening cape by New York designer Dominic Rompollo. 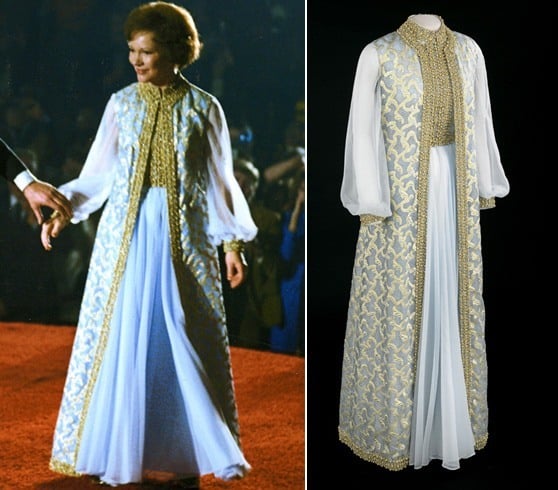 Jackie’s grace and style has always reflected her wonderful fashion choices. In fact Jackie Kennedy simply loved to wear bright colors such as pink, yellow, red and ivory. Audrey Hepburn was her personal fashion icon and throughout her life, Jackie followed Hepburn’s old Hollywood glamor in her dresses.

For the 1961 celebration, Jackie Kennedy wore an ivory column that had silver embellished bodice, veiled with a sheer overblouse along with a matching cape to bring in a touch of royalty.

The interesting thing is that Jackie herself designed the gown in collaboration with Bergdorf Goodman’s Ethan Frankau. Here is the video of Jacqueline Kennedy’s inaugural ball gown:

Hope you have loved the inaugural gowns of the First Ladies. Drop in your comments and tell me which inaugural gown of which First Lady bowled you over at first glance.

How To Create A Simple Striped Nail Art At Home

Mahira Khan Is A True Stunner And Here’s The Proof

7 Ways To Dress Up With Black Lace Shorts

Rose Oil Benefits: Transform Your Life With This Essential Oil!

Fashionlady - May 7, 2017 0
If there’s an essential oil which has so many properties and plus smells amazing, we are sure everyone would like to have it with...