If there is one celebrity babe who is carving her own niche in the acting and dressing space, it is one other than the star daughter of late Sridevi, Janhvi Kapoor. Just one film old and Janhvi is keeping the shutterbugs occupied with her style moments. Read this piece till the last word. It might show you another Sridevi-in-the-making. 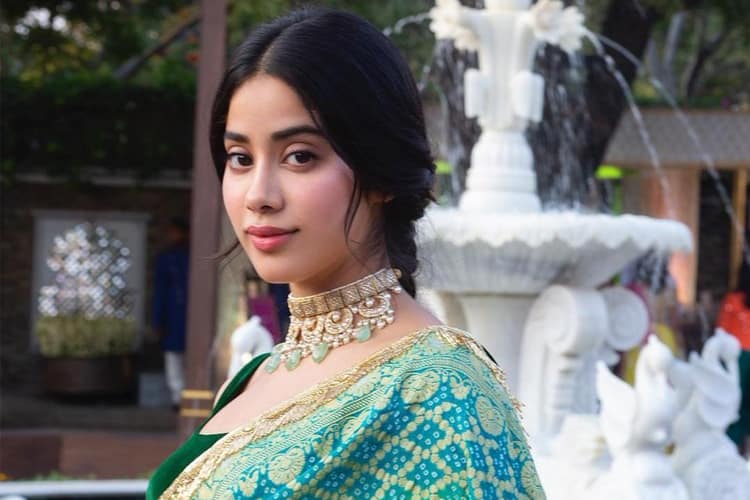 Born to actress Sridevi and film producer Boney Kapoor, the young and beautiful Janhvi Kapoor is already setting trends in her acting and ramp walks. There is so much to her which is unique and in a class of its own. Let’s find out how she could be the next big star in Bollywood. 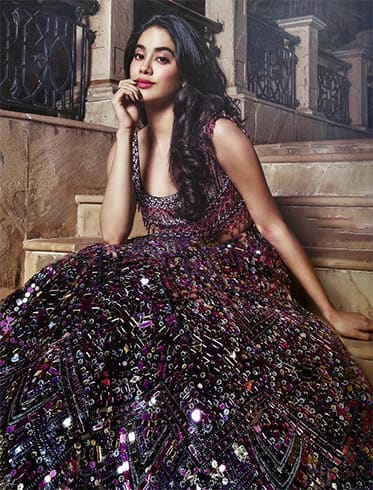 Janhvi Kapoor is an Indian actress and model. Even though she is one film-old, her looks and star appeal is winning her appreciation. 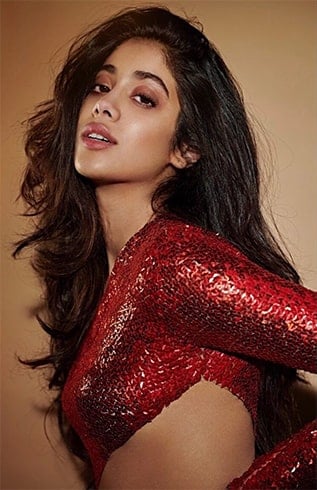 The gorgeous Janhvi Kapoor won her first award – the Best Debut Award for the movie Dhadak at Vogue Awards 2018.

Now for Janhvi Kapoor Fashion Profile. Well, there are no surprises. She is after all the daughter of late Sridevi, so you can expect lot of Sridevi’s fashion highs and moments being carried forward with great legacy. Let’s check out the style statements of Janhvi Kapoor.

At the 65th National Film Awards ceremony in Delhi where Sridevi was felicitated with Best Actress Award for MOM posthumously, star daughter Janhvi Kapoor looked a true beauty in a gold and red sari made by Manish Malhotra. The contrasting blouse and jhumkas looked as much regal as her thickly-lined eyes, pink-tinted lips and soft wavy hair.

Janhvi Kapoor in backless sequin top which she paired with boyfriend jeans. In a quirky-looking colorful attire designed by Rippi Sethi. 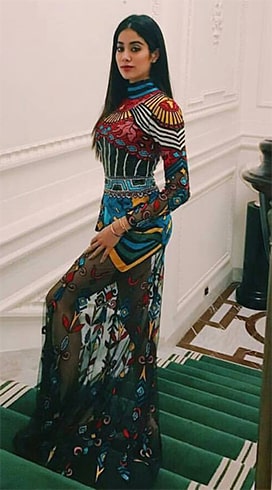 The pretty lass Janhvi Kapoor walked the ramp for the first time in a stunning outfit for designer Nachiket Barve on Day 3 of the Lakme Fashion Week 2018. After the ramp-walk, Janhvi told the media “When he showed me a swatch of the fabric, I thought it’s so stunning and in my head I was like I am going to trip and fall on my face because it looked so heavy, but then when I tried it on, the outfit was light and comfortable”. 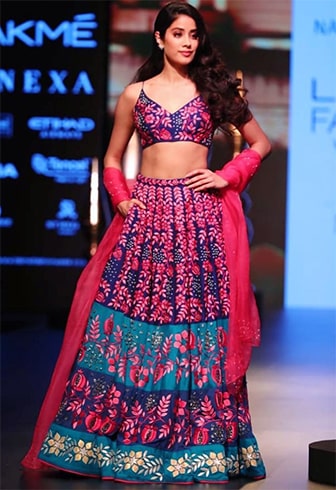 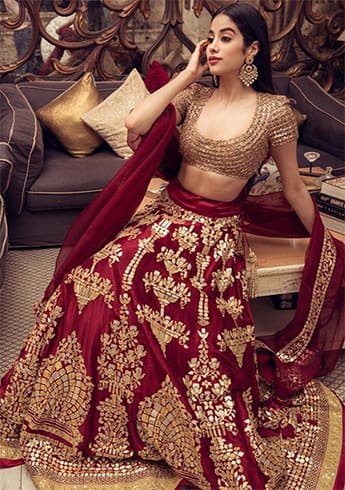 For Navratri 2017. Janhvi Kapoor dressed to kill in a white lehenga. This is style diaries picked to inspire you for your next Navratri. Janhvi in a tie-dye kurta with some amount of embroidery on it. How color-perfect she looks!

Janhvi in a parrot green Anarkali with hints of pink designed by Manish Malhotra. Soft curls, jhumkis and understated makeup made the actress walk away with attention. This was for the trailer launch of her debut film, ‘Dhadak’ at an event held in Mumbai.

It is difficult to separate Janhvi from MM creations. Here she is in yet another gorgeous princessy pink outfit by the designer.

All for floral! Janhvi in a blue and white color combination, a pair of juttis and a white tote bag. 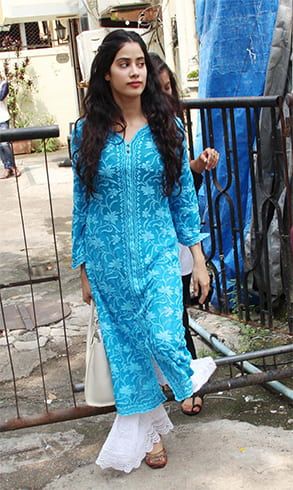 Born to actress Sridevi, what does Janhvi Kapoor do to glam up her looks? Janhvi Kapoor makeup tips? She invests in lots of moisturizers, Vitamin C serum and almond oil to keep her skin looking fresh, dewy and glowing. Concealer she uses to hide under eye bags, especially after jet lags. Since she has great skin, Janhvi puts little foundation, something like her skin tone.

Celebrity make-up artist Vardan Nayak in an interview to Elle magazine said “For Janhvi’s look in Dhadak, we kept it simple — an eyeliner, kohl and plain lipsticks with an earthy tone. During the film’s promotions, we gave her a glassy look: for her eyes, we used metallic pencils, skin-coloured liner for the waterline, lots of mascara, and peachy and earthy eye shadows. We sometimes avoided kohl since it didn’t fit in with her Indo-western look.” 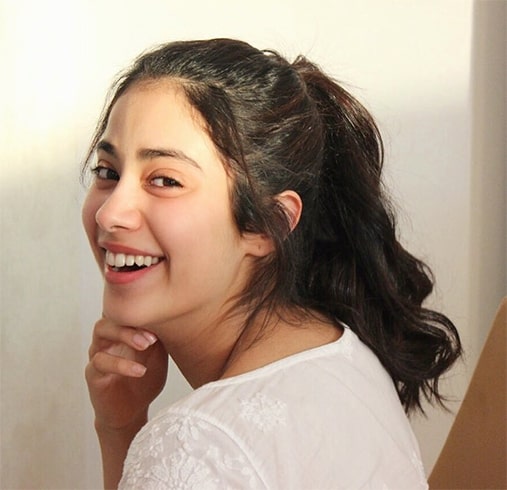 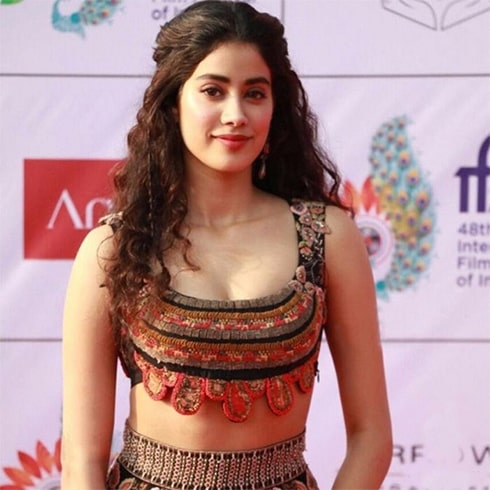 Itching to know how she looks without makeup? Here it is – beautiful still! 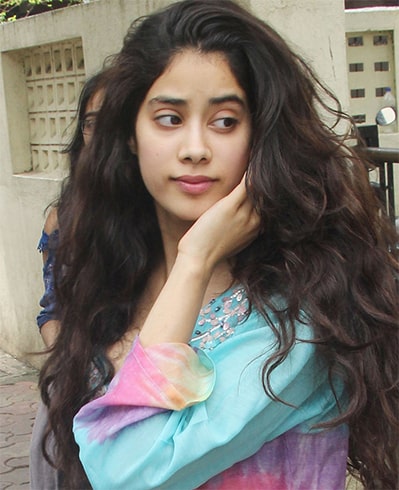 So what does Janhvi do to get that well-toned and fabulous body? It is time to know Janhvi Kapoor Diet Plan first – which is a lot of fruits and vegetables, lots of drinking water, no sugary products and junk food. Dietary breakup is as follows:

Breakfast – Toast and egg whites, a glass of juice, cereals and milk

Are Janhvi Kapoor Fitness Secrets as rocking as her ethereal beauty? She puts in her heart and soul in cardio exercises and weight-lifting, jogging, swimming, or jumping at home. The actress also does 1-hr yoga thrice a week. 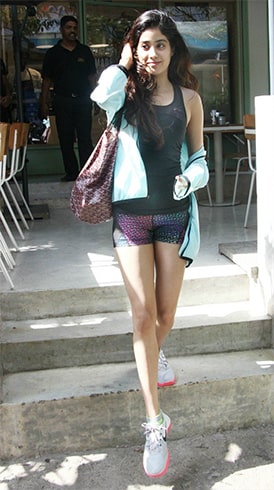 Janhvi Kapoor Social Profiles are worth jotting down right away:

What are your thoughts now after going through Janhvi Kapoor Fashion Profile? Impressed? Or a fan of hers? Write in and tell us your comments.

Images Source: Official instagram profiles of the celebs/designers/stylists mentioned with in the article.