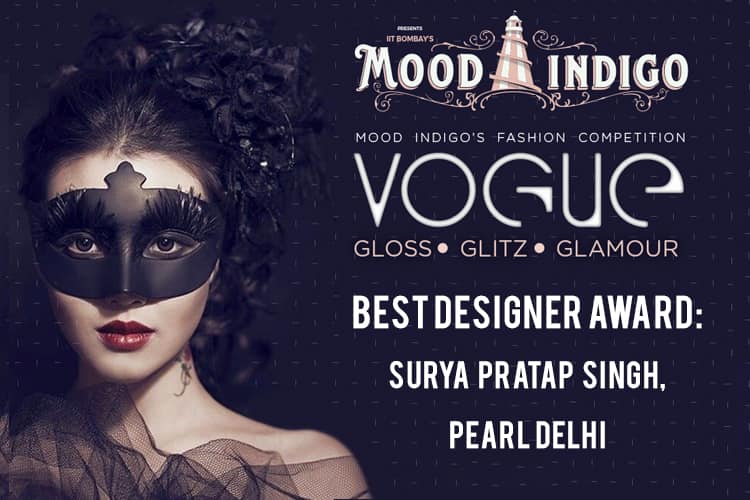 The annual cultural festival of IIT Bombay, India’s top educational institute, Mood Indigo or Mood-I as it is fondly called is Asia’s largest college cultural festival with a footfall of more than 1,39,000 students from more than 1500 colleges across the globe every year and Mood Indigo’s Vogue is the Largest College Fashion Competition with participation of more than 200 teams every year and is unquestionably one of the best launch pads today for young creative designers and aspiring models to realize their dreams. Having witnessed eminent industry front-runners like Ritu Kumar, Neeta Lulla, Wendell Rodricks and Dabboo Ratnani, Avinash Gowariker as judges and mentors. VOGUE has seen its participants scale great heights and achievements, notable among whom are Miss India World 2008 Parvathy Omanakuttan and famous Bollywood actress Hrishita Bhatt. Fashion is an art, a religion, a peek into a personality. For some, it’s an escape or a disguise while for others it’s just being comfortable. But ultimately, fashion is an individual statement of expression for each of us and Vogue is the avenue to express yourself.Boasting of a decade-long legacy, the “gloss, glitz and glamour”, India’s largest college fashion competition, Vogue 2017 was even bigger.

My team and I could not have been much proud of the best designer award. It is wonderful to be a part of it. I would like to thank “Mood Indigo” and the whole team for providing such platform to showcase one’s creativity and hard work. It is beyond amazing to be a part of IIT in such way, truly, creativity and intelligence coming together.

I would like to take some time off and talk about the design aesthetics that we brought on to the platform which made us win “Best Designer” award. The design is an ever-growing and ever-evolving process which needs to be understood and acknowledged. To me, Design is pure “simplification” and nothing else. This “simplification” is impactful when done right. That is what my team and I did with the help of our mentor, Mr. Ashish Dhaka, the design faculty at Pearl Academy, New Delhi.

The brief for the “Vogue” competition was to showcase the past and the future of fashion. If we all look at the world after zooming out, we see people moving towards a place where there will be no boundaries or borders. People have access to the internet and other media where it doesn’t feel like we live in a room in our house. It is all global. We know what all is happening around the world just by tapping on to some social media app in our mobiles just before going to bed at night. We all follow these highly hyped up trends on Instagram, Facebook, and other social media. It feels like we all know each other and we all sort of follow and copy each other with our own twist of individuality. So the fashion of future becomes something where it is a little hard to categorize anyone on the basis of money, caste, religion, geographical location, etc. whereas if we look in the past, there were great divides on the basis of these very things that I just talked about.

Taking the same ideology forward we created this collection of fashion of past and future. We had 4 looks in the category of fashion of past taking inspiration from the culture of India, Japan, Middle East, and Europe respectively. All the four looks were sent on the runway individually to send our message across i.e. every look is different whereas there were 3 garments that came on the runway together to represent the future of fashion which all kind of looked the same with some color variation. Last but not the least there was one fusion look presented too.

We really did put our best when thinking about the soundtrack that needed to go with every look keeping the timeslot in mind since it was a competition. We thrived to showcase what we are really capable of doing with the conceptualization of the music that had to go, the choreography of the models on the runway and of course the looks.

I say, “Less is more” which absolutely did go with the color scheme that we had put up where there was full focus on the silhouettes than anything else.

“I am just beyond happy that we came this far and won the prize, the prize that is the best, being the best in design. Thanks to IIT Bombay, Mood Indigo, my college Pearl Academy, my fashion society Tarz and all the members, and our mentor Mr. Ashish Dhaka for this amazing success.” – Surya Pratap Singh

Various Ways How To Use Scarves As Accessories While Braving The...

Prince Harry And Meghan Markle’s Marriage Was As Magical As A...

10 Embroidered Kurtas To Flaunt This Season

Spa la Vie By L’occitane – A Visit To Heaven And...

Fashionlady - March 1, 2016 0
Looking for a much needed ‘me’ time, to relax, detox, refuel and beautify? Indulge in the services of Spa la Vie by L’Occitane and...