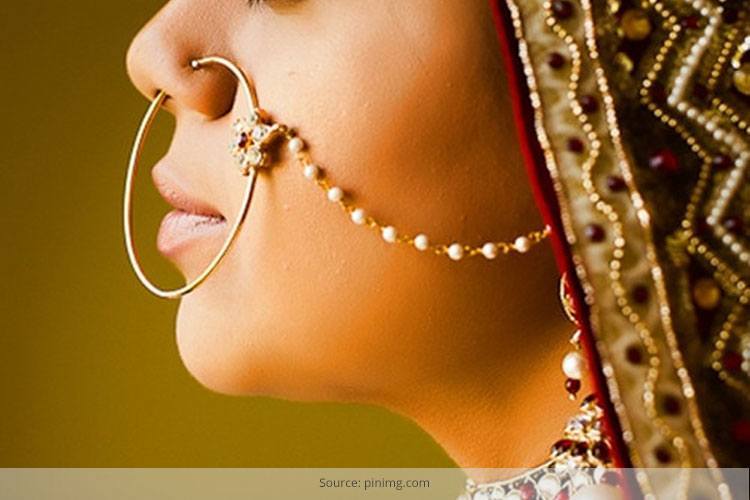 Piercing nose and adorning it with a gleaming pin, stud or ring is not only an age-old tradition in India. Rather, it has immense significance in the lifestyle of a woman. And these days, it has even become a true fashion statement. The shapes, sizes, patterns, motifs and materials of naths or nose rings vary widely based on the cultural demands of various regions of the country.

Today, we will have a glimpse of regional nose rings that have been beautifying Indian women since time immemorial:

When it comes to the most popular Indian bridal nose rings, Punjabi Shikarpuri nath always tops the chart. The elegance and charm of the huge golden ring as well as the chain connecting it to the hair will make you fall in love with the ornament easily. The hoop may come in a variety of sizes, motifs and colors. Moreover, it is adorned with small dazzling pendants that go even all along the connecting chain.

Nathni is basically a lighter version of the sparkling shikarpuri nath and it is mainly popular among the women of western India, in particular Rajasthan and Gujarat. It also consists of a big golden hoop and a long delicate chain connected with it. But, the presence of pendants or gemstones in a nathni is rare.

While nathni is considered as a glorious choice for Rajasthani brides, women in that state are also found to wear another kind of nose ring called ‘nathuri’ as an everyday jewelry. The tiny ornament is made of gold or silver and embellished with a single or 2 to 3 precious or semi-precious gemstones. The design is quite simple and graceful.

Nathuli is the traditional nose ring of Uttarakhand. It is basically native to the Tehri district of Garwhal and is celebrated for its great artistic value. The big gold ring is decorated with multiple precious rubies and pearls. The size and weight of the ring as well as the number of pearls in it can vary widely, which actually signifies the status of the family of the woman wearing it. Nathuli is considered auspicious and a cherished possession of married women in that region.

Laung is a cute petite nose stud, which has immense popularity across the whole northern region of India. The name of the jewlery has come from its shape, which resembles the common aromatic spice clove. It is mainly made of gold, while a pearl or any other precious or semi-precious gemstone is embedded in it.

This is another distinctive nose ring concept in which the chain connecting the nose stud or pin with the hair gets more priority. It is completely a North Indian choice. The whole set of latkan comprises of a simple metallic nose pin or stud with no significant adornment and a pretty ornamental connecting chain almost identical with a charm bracelet.

Bulaq or bullaq is a bridal nose ring style followed by women in North India. It is absolutely different from regular naths that are worn on the nostrils. Rather, it needs to be put on the central lower section of the septum or partition of our nose. The ring comes in a small pendant form of various shapes and generally, does not contain any external embellishment.

Pullaku is the southern version of bulaq or bullaq, which is quite common in Tamil Nadu. It is also a central nose ring that suspends freely from the division of the nose i.e. septum. However, it can also be worn along with the mukuthi, which completes the authentic South Indian bridal look.

Palakka jewelry is regarded as a time-honored style by women of Kerala. The nose studs belonging to the palakka pattern look bright and gorgeous with beautiful red stones and precise enamel designs. It is sure to give you a chic, versatile appearance all the time.

So, which region of India has impressed you in terms of nose ring? Go grab your favorite one and give yourself a stunning makeover.

Bollywood Have A Chilled Out Time At Manish Malhotra Party

Deepika Padukone To Get Her Wax Statue At Madame Tussauds,...

What A Proper Diet For Dry Skin Must Include