Indian Fashion Blog
Home Events Selena Gomez Is The Queen Of Instagram, Despite Months Of Hiatus 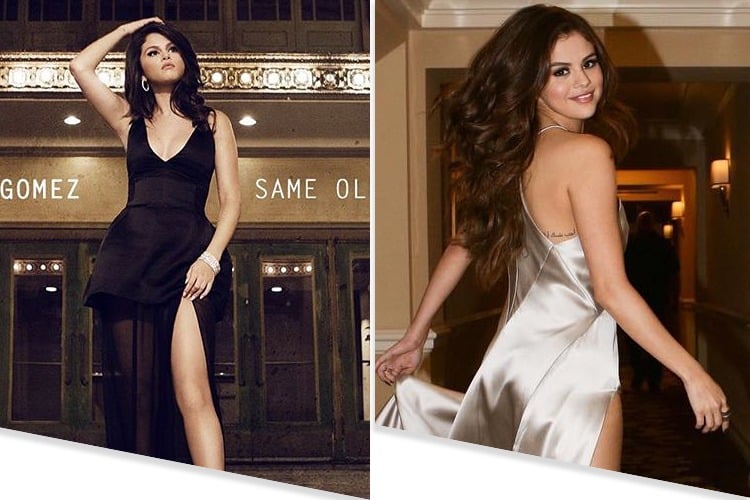 In the age when the virtual world seems more real than the real one, people are ready to do anything to garner followership of people they don’t even know exist. Twitter and Instagram are a different universe and we all are a citizen of them, Instagram, especially, is a world of Selena Gomez that we are happily living in. As the photo sharing website revealed its statistics for the year 2016, Selenators have found themselves wallowing that their queen is the most followed person on Instagram, we are not even surprised. Surprised, we are however, that in a world where some celebs are baring it all, posting one nude after another, all in the name of the number game, our girl Sel Go does it effortlessly. Let’s check out our favorite picks from the Instagram account of the ‘Kill’em With Kindness’ singer.

A simple girl-next-door kind of a look could actually fetch the super star over 5, 980, 000 likes making the pic for coke campaign the most liked pic in the history of Instagram. The minimalism of this pic marvels one. With her own lyrics written on the bottle, the star is encouraging her followers to grab a bottle of soda and me, for one, always feel like drinking a coke whenever this pic floats in front of me. In fact, Selena Gomez looks a million bucks, regardless of what she is sipping. We can’t even fathom the overflow of cuteness in this pic. She has rollers on her hair, her makeup is half done, and girlfriend is comfortable drinking coffee. This coffee is giving me all the power to kill Monday morning blues. I mean, keep the nudes aside, we just need some caffeine to stay up. 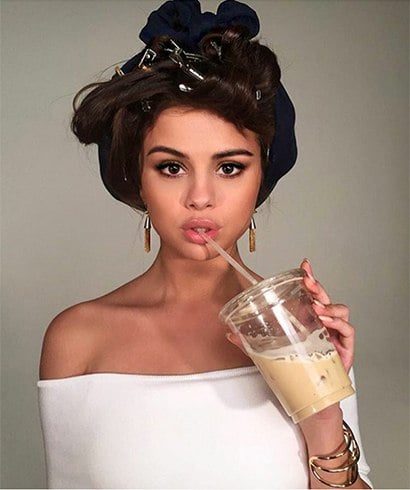 The reason why the Revival star doesn’t need to depend on makeup to post one gorgeous pic after another is because natural good looks are what she has inherited from her momma. Selena was born when her mom was just 16 and is no less a diva than the star herself. Here is a side by side picture of the mom and the daughter that Selena had posted on her IG and we couldn’t decide if we should gawk left or right. 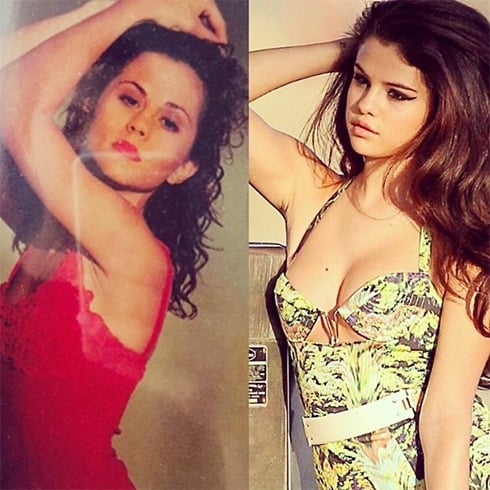 Now we have seen celebs posting glamorous divaesque pictures on their social networking sites. But seldom do you see a celeb posing like a geek and still looking a million bucks. This picture of Selena Gomez, for instance, exemplifies that people will love you for who you are, not how much cleavage you are showing to the worlds. 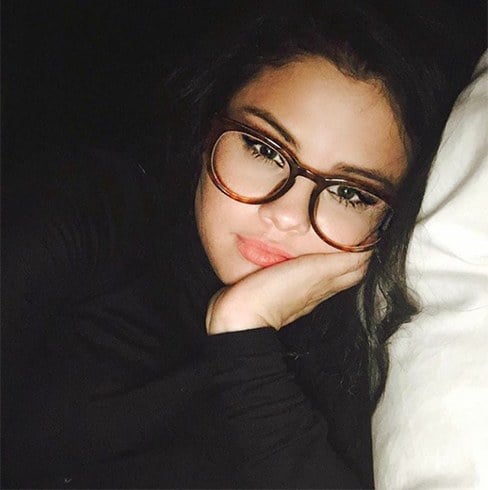 Despite being one of the most influential and recognizable celebrities in Hollywood, the wizard of waverly place does take a trip or two of the super market, you know, to pick groceries and stuff. And when the lighting is perfect, she doesn’t mind getting clicked either. ‘Pose? Who cares? I’m just gonna sit on a trolley and suck on a popsicle.’ 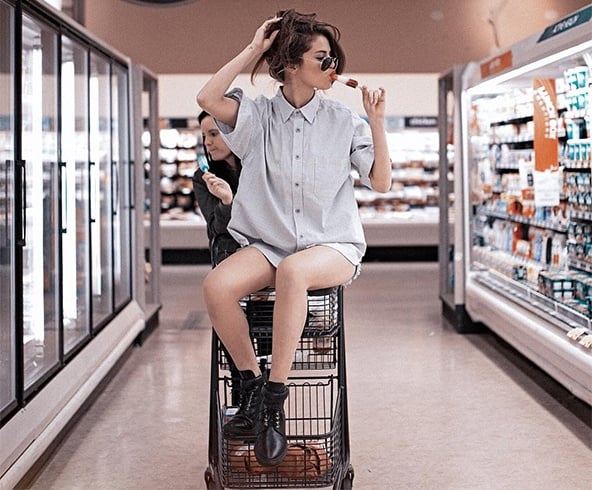 She had maintained a healthy balance between cute and sexy, regular and exotic in her Instagram Account. That could be a reason owing to her massive popularity. When she wants to play it sexy, there is hardly anyone who could out do her. Check out this pic with the look from Same Old Love. This is a killer. And then there was that one time the IG servers crashed as the star of the show posted a naked picture. Actually, if you look closely, Selena is wearing high-waisted boxer shorts and has covered the boob area masterfully. While most nude pictures get us uncomfortable, this one was purely a work of art. Apparently, this was also the cover of her Revival album. 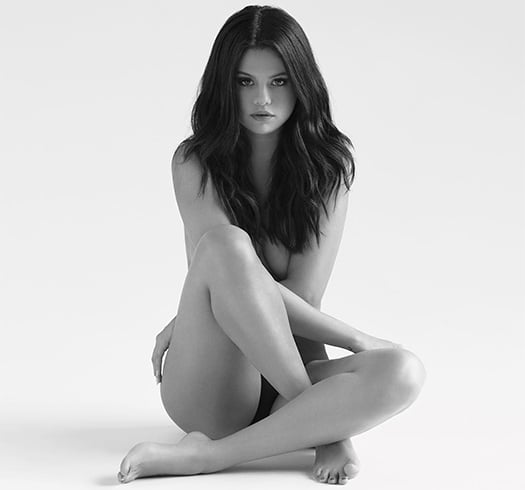 Our next pick shows a stunning Selena running about in the hallway of a hotel, evading the paparazzi, or so does the photo suggests. She looks ravishing in her floor length gown and we are sorry, but not sorry not staring at this one like maniacs for hours. 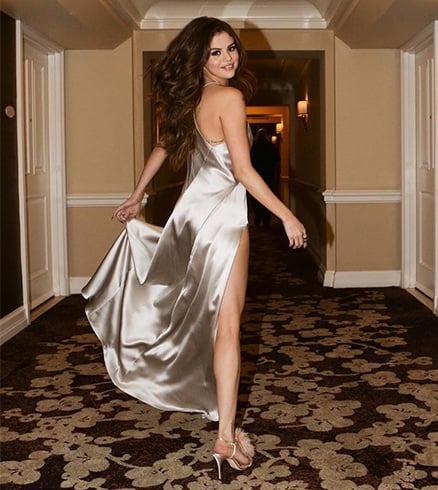 That one time she found herself playing the piano in a small Texas house – well, isn’t she just adorable. We have seen all kinds of bikinis, but this multi-colored all ruffled up bikini hugging the singer is the cutest of all lingerie I have seen in my life. Tell me that you agree, because I know you do. 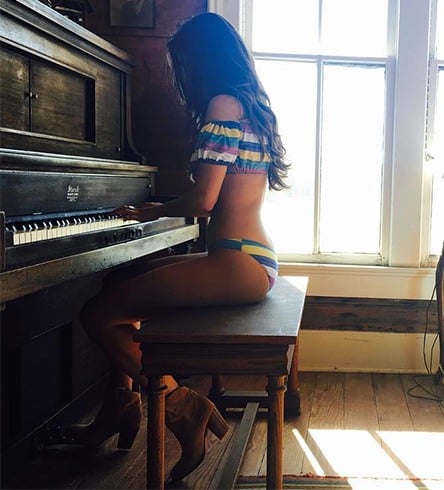 Talking of bikinis, our last selection in this one. The post followed Selena being body shamed by a fan and she was strong in her message to the world that it’s all about loving oneself. Out of 10, 8 of the most liked pictures on Instagram this year was from the pop divas account, with her bestie Taylor Swift following her on second place in followership. Do you have a favorite Selena Gomez picture that we have missed to feature? Let us know in the comment section below.

Bridal Makeup Tips To Help You Look Like A Million Bucks

Designer Dresses Vs Nature: Worth a Standing Ovation!

Gold Tattoos Ideas Are Making Waves Across The World – Are...