Sonam Kapoor is a name which has now become synonymous with our image of a true style icon.

Agree or not, her personal style is anything but boring. The woman defies cliche in all forms and believes in surpassing set benchmarks. We love and respect the diva for her undaunted spirit when it comes to experimenting with a whole range of looks. Be it cuts, colors or hair updo’s, the fearless actress always takes the roads less travelled and inspires us to push the boundaries.

While Sonam manages to ace most of her experiments, at times even this starlet gets carried away and takes some ott fashion risks which certainly fall back on her fashionista image.

For her appearance at the ET Panache Awards night, Sonam Kapoor dressed up in a black and blue, Del Pozo gown. The voluminous net drapes looked clumsy and failed to flaunt the lady’s figurine. The abstract print in blue did not fascinate us and the silver heels from Casadei also did nothing to elevate the look. The sleek side parted bun further took down the look. Sorry Rhea, but we wish you had worked harder on this one. 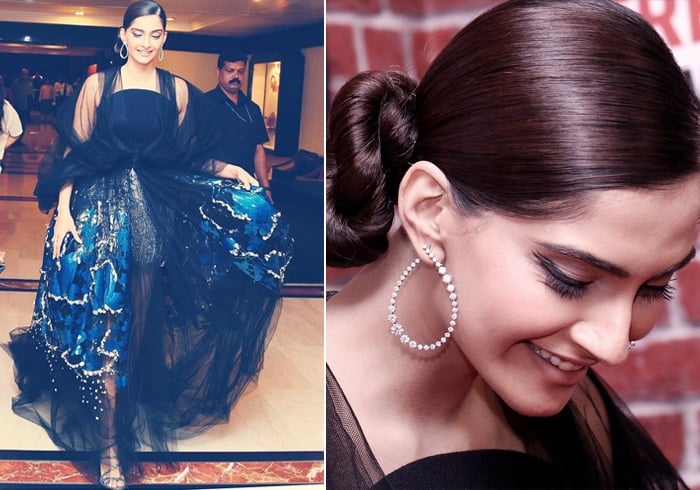 Spotted recently at the airport, Sonam’s travel look failed to impress us. The white outfit from Pero looked nothing more than a night-gown. Trying to work the oversized trend, this ensemble owing to its lack of definition, caused a dip in the fashionista’s style files. We suggest some inspiration from Neha Dhupia. The red boots and Balenciaga bag played mere add on’s. 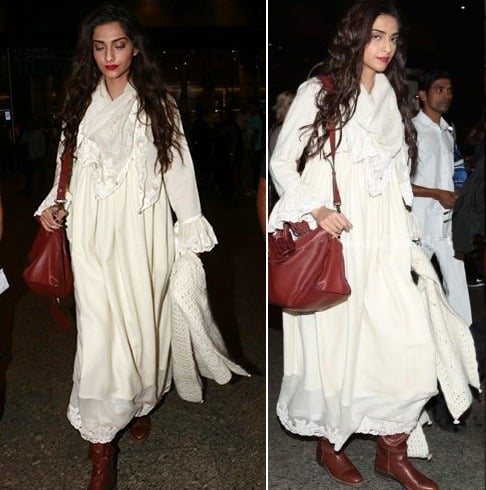 We were not convinced by Sonam Kapoor’s Fight Hunger Foundation dinner spotting in a white off-shoulder midi dress from Proenza Schouler. Although the jewellery pieces from Aurelle, peeps from Manolo and clutch from Judith Leiber averaged out her look, we wish stylist Rhea Kapoor had opted for a better dress. 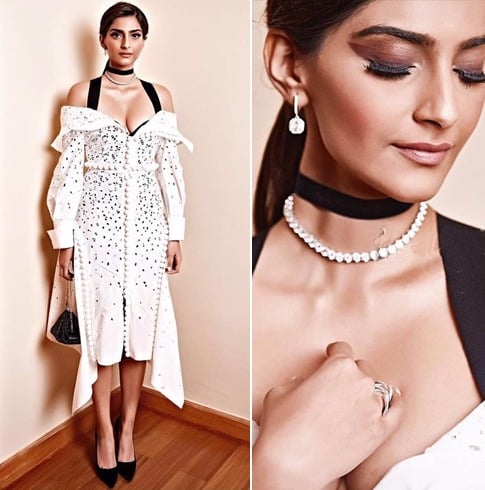 Sonam’s choice for a ruffled short dress from Abu Jani and Sandeep Khosla backfired as such dramatic ruffles on a short dress was a major faux pas. This dress was definitely the print ad type and the diva went all wrong wearing it for her Lo’real event appearance. 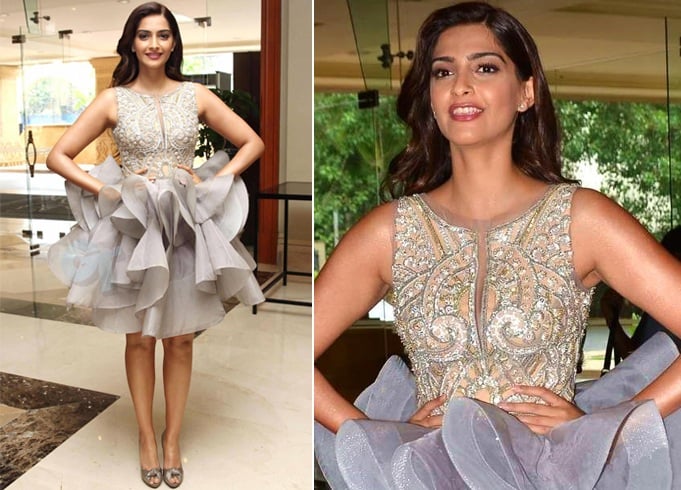 Sonam decked up desi for the Mother Teresa Memorial Award night. Although the lady chose to don a beautiful pastel saree from the house of Rahul Misra, we certainly felt Sonam’s discomfort in the six yards. It seemed like Sonam had issues carrying the saree’s palla. The palla taken over the shoulder definitely did not work for the actress. Though the hair do and earrings went well with the saree but they failed to amp up Sonam’s overall appearance. For a charity event in association with the Fight Hunger Foundation, Sonam Kapoor dressed up monochrome in a Masaba Gupta saree. The all over print did not go down well with us. Looked like a lot was happening on a single silhouette. Sonam disappointed us with this one.

Her flat hairdo and pearl earrings failed to balance out her appearance. 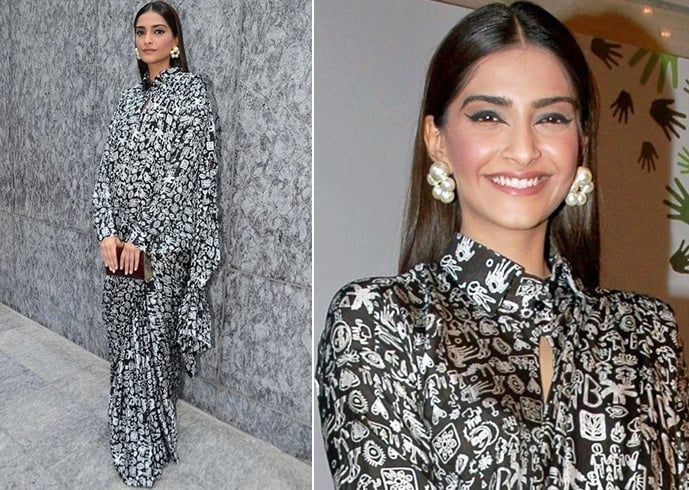 To honour Neerja Bhanot, a chowk in Mumbai was renamed to Neerja Bhanot Chowk, and Sonam Kapoor was invited to inaugurate the same. Sonam’s pastel blue Raw Mango sari looked average, with the blouse causing much damage to her look. The sheer sleeves looked pretty depressing. 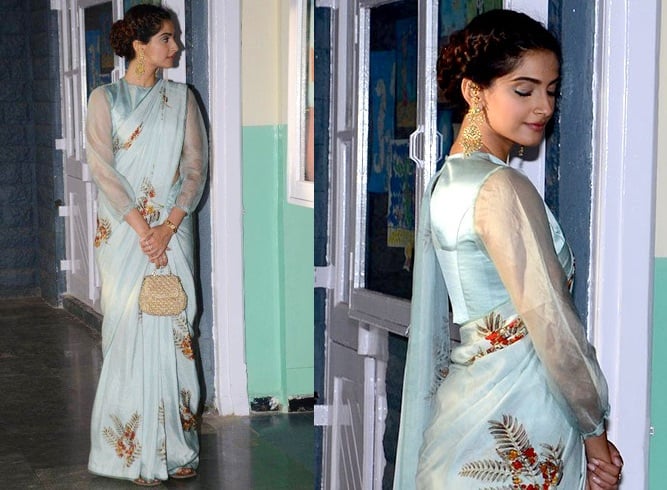 At the launch of a new smartphone from Oppo, Sonam suited up rather odd in Roksanda separates. While the sleeves of the blazer looked long, the culotte pairing rendered a funny appearance. We otherwise heart Sonam’s power packed suit up’s but this one was surely a blow. For the wedding reception of Bipasha Basu and Karan Singh Grover, Sonam picked up a white sari featuring a red border from Nikasha. While the sari looked too simple for the reception, it was the strapless blouse that played a total bummer. The frills looked weird and the fit definitely itched our eyes. We loved that choker and bun hair updo, only if Sonam had paired the saree with a beautiful blouse. Sonam’s attempt to work a fusion look in a white Elie Saab couture piece certainly was an experiment that worked against her style icon image. The ensemble looked more from a theatrical drama and particularly failed to justify Sonam’s tall facade. The sleeves along with that shirt collar looked dreary. Usually rocking her all white looks, this one was a complete showdown. Sonam Kapoor slayed us with most of her promotional looks while promoting the movie Neerja. However we have to admit, two of them acted as major bumps to her otherwise smooth ride.

At the song launch of Neerja, Sonam opted to exude a positive vibe wearing a cheerful yellow cold shoulder woolen top from designer Prabal Gurung. Although the cardigan looked chic, Sonam went wrong with the styling bit. The oversized sleeve left to cover her palms, and that silk skirt pairing were surely the heartbreakers. In a neoprene dress from Dolly J, Sonam went down on our fashion radar. The fitted bodice made the actress look bloated and busty. Also her tresses let loose in curls over-shadowed the slight collar detailing. A pulled back hair do would have fared much better in the given circumstances. 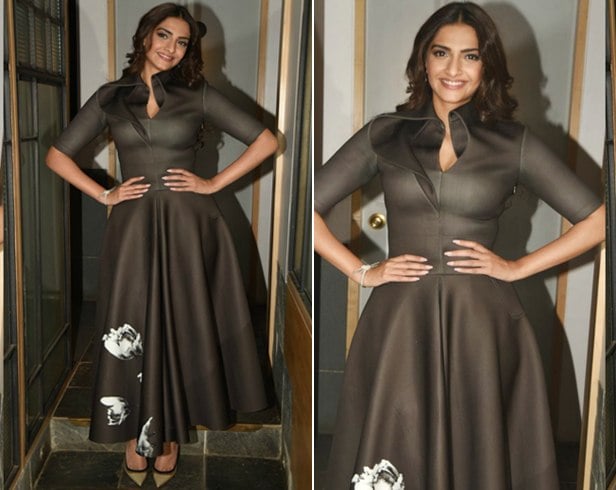 We certainly don’t question Sonam’s fashion aptitude and are sure that the diva will be quick to correct her errors and bounce back, flaunting her usual swag in the coming year.

13 Awesome Benefits Of Rose Water For Skin, Hair, Eyes And...

Why Katrina is Manish Malhotra’s Anarkali

Check Out The Celeb Styles That Cool Off The Rising Heat...