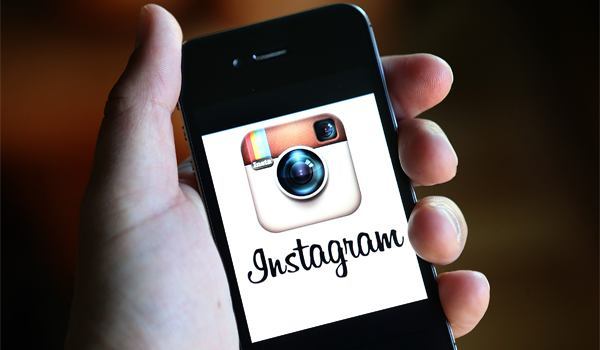 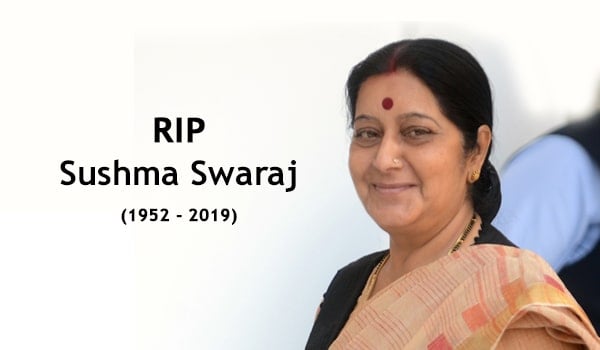 Former External Affairs Minister and Senior BJP leader, Sushma Swaraj met with a massive cardiac arrest on Tuesday, 6th August. She was rushed to AIIMS emergency ward around half-past nine in a critical condition. The team of doctors tried their best to retrieve the politician but she ultimately breath her last. 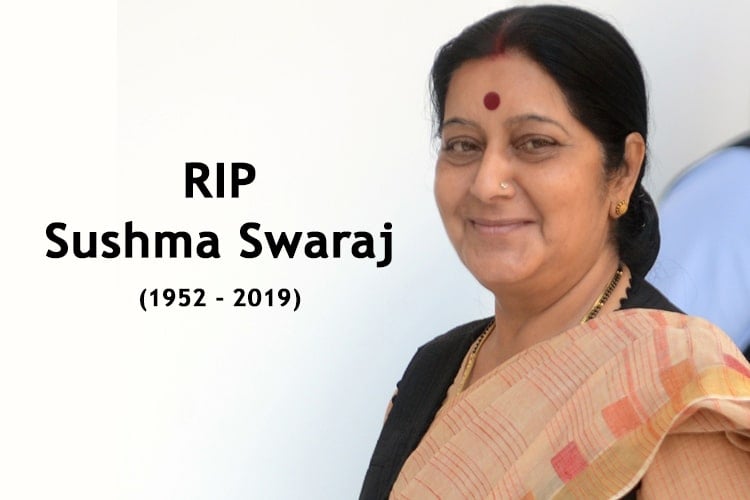 The untimely death of the senior BJP leader sent shock waves across the nation. Condolences poured in from all quarters including world leaders.

In a series of tweets, Prime Minister Narendra Modi remembered the late minister’s extraordinary work – “A glorious chapter in Indian politics comes to an end. India grieves the demise of a remarkable leader who devoted her life to public service and bettering lives of the poor. Sushma Swaraj ji was one of her kind, who was a source of inspiration for crores of people.”

Modi continued his praises for Swaraj by calling her a “prolific orator and outstanding parliamentarian” and said she was admired and revered across party lines. “She was uncompromising when it came to matters of ideology and interests of the BJP, whose growth she immensely contributed to.”

“An excellent administrator, Sushma Ji set high standards in every Ministry she handled. She played a key role in bettering India’s ties with various nations. As a minister we also saw her compassionate side, helping fellow Indians who were in distress in any part of the world,” he said.

Other senior ministers, including Smriti Irani Prakash Javadekar, Harsh Vardhan, and Rajnath Singh visited AIIMS after she was bought to the hospital.

President Ram Nath Kovind also tweeted – “Extremely shocked to hear of the passing of Smt Sushma Swaraj. The country has lost a much loved leader who epitomised dignity, courage & integrity in public life. Ever willing to help others, she will always be remembered for her service to the people of India.”

External Affairs Minister S. Jaishankar to Sushma’s demise stated – “Deeply shocked to learn of the passing away of Smt. Sushma Swaraj. Difficult to accept this news! The whole news grieves, the Foreign Ministry even more so.”

The Congress sent condolences to the late minister – “We are saddened to hear about the untimely demise of Smt. Sushma Swaraj. Our condolences to her family and loved ones.”

Congress leader Rahul Gandhi also tweeted, “I’m shocked to hear about the demise of Sushma Swaraj ji, an extraordinary political leader, a gifter oratar, & an exceptional Parliamentarian, with friendships across party lines. My condolences to her family in this hour of gried. May her soul rest in peace. Om Shanti.”

Bangladesh Prime Minister Sheikh Hasina sent her deep condolences. In her message, she sent her wishes to the bereaved family. “She (Sushma) was a good friend of Bangladesh. With her death, Bangladesh has lost a good friend. Bangladesh will recall her contributions in taking the relationship between the two countries into a new height.”

Dalai Lama also shared his sympathy – “I offer my prayers & my condolences at this difficult time. Sushma Swaraj enjoyed immense respect for her compassionate concern for people & her friendly demeanour. In devoting herself to service of others, she led a very meaningful life.”

The astute senior leader’s mortal remains were taken to her Delhi residence. Her mortal remains will be moved to BJP Headquarter on Wednesday where party leaders and workers can come pay their last tributes.

Here is a timeline of her work graph: Sushma Swaraj was an assertive and strong leader. She played a major role in strengthening BJP’s position in India in the 1990s. Swaraj is also remembered for resolving the Doklam standoff in 2017 with China. The senior leader was always prompt with her responses on Twitter to sent grievances across overseas Indians. All in all, a passionate and brilliant minister, we lost a great one.