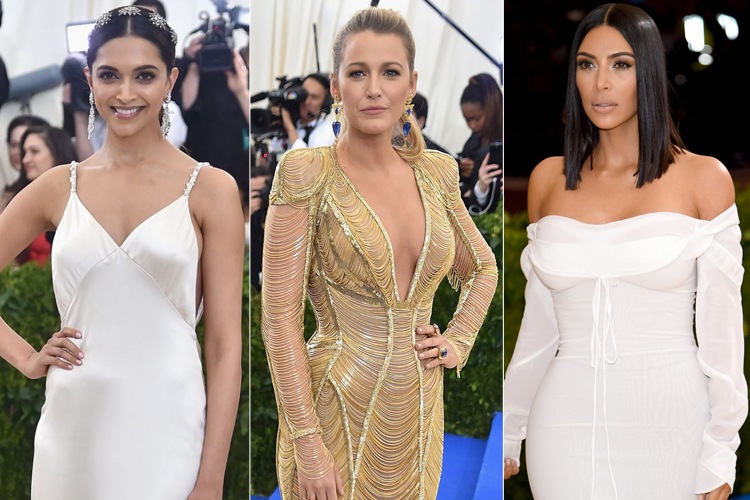 As New York’s Metropolitan Museum of Art opened its gate to welcome celebrities to year’s most stylish and fashion forward evening, we saw the who’s who of Hollywood swarming in the celebration of ingenuity and innovation in clothing. We know you can’t wait anymore so let’s start with our list of the best-dressed at the 69th Met Gala themed around Rei Kawakubo/Commes des Garçons and see how your favorite celeb rose to the occasion.

Hollywood’s most promising import from Bollywood, Priyanka Chopra, was all set to claim Rihanna’s fame that she earned for her yellow Omlette trail 2015 Met Gala dress. Priyanka’s look was designed to break the internet in style as the Ralph Lauren trench coat made an appearance at the venue, and its mile long trail followed. The boots and the top knot was reminiscent of the badass she plays in Quantico. Deepika donned in a Tommy Hilfiger dress, all white and angel like, with a sexy back that caught all attention. Her makeup and headband sure added the much needed oomph to the simple sexy dress. Can’t take your eyes off her, isn’t it? The supermodel chose to go body skating in this very risqué La Perla dress. It was quite a struggle to figure out where exactly was this chain mail number showing off her skin and where it was seated on a nude underlay. Honestly, who is even complaining if there were no underlays at all? 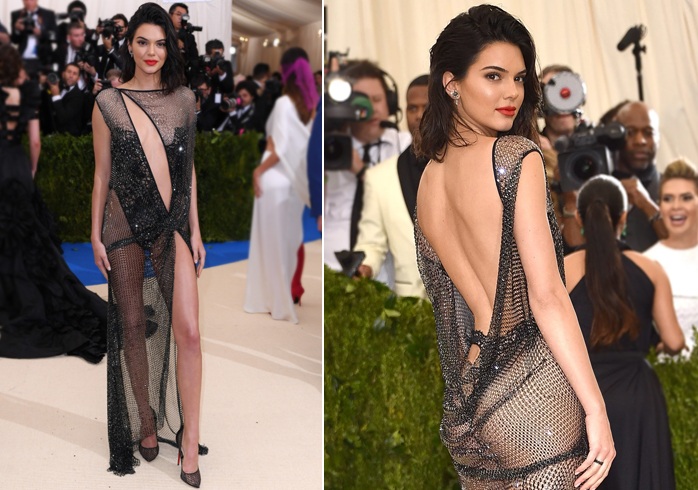 Though the songstress has been rocking the Met Gala year on year, this year’s red carpet was certainly a special one. Dressed in a spaghetti plunging gown by Coach, it was Selena’s first red carpet with her new bae Abel, or maybe you’d know him as The Weeknd. Doesn’t she look perfectly divine in this white ensemble? Things might have turned a bit uncomfortable as Abelina bumped into Bella Hadid’s family, but we are sure Hollywood conditions its people to keep calm in such situations. Calm inside and smoking hot on the outside, the younger Hadid sister showed up in an Alexander Wang creation. Now, what do you call that? Daring? 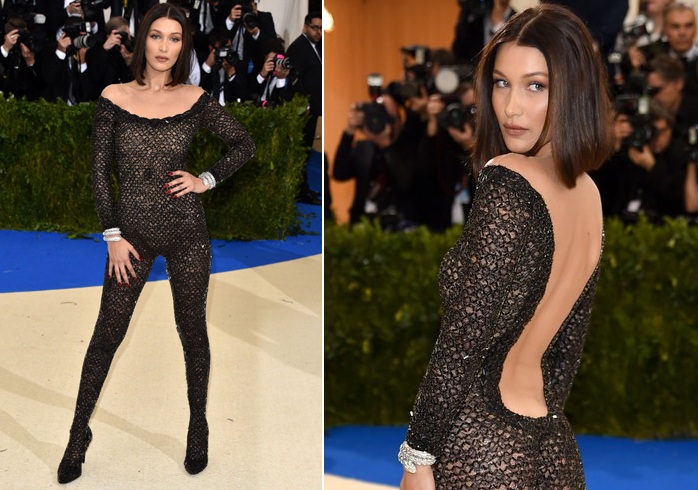 The award for best outfit, if there’s any, must go to the Bon Appetite singer for trying this unconventional number that clearly shows the number of hours that went into conceptualizing and preparing a dress like this. With its red veil featuring winged mirrors by the ears along with springs and an ‘eyewitness’ embroidered across the eyes, we have little idea of what John Galliano was trying to portray, nevertheless, we always appreciate a well thought out creation. The Kardashian-Jenners are known to hijack every red carpet event, so what were the chances that this one would go safely? None! The empress of Kylie cosmetic, the youngest business woman in the family was seen at the event channeling her inner goddess in this golden number by Versace that leave barely anything to our imagination. That platinum blonde bob is certainly a mature hair choice. The OG of the Kardashian clan kept it low, perhaps this is an aftermath of the Perisian disaster. But she doesn’t need a lot of makeup to look perfect and that is exactly how she appeared in her Vivienne Westwood gown. We aren’t really used to seeing the reality TV star clothed head to toe, so this was certainly a surprise, a pleasant one at that. 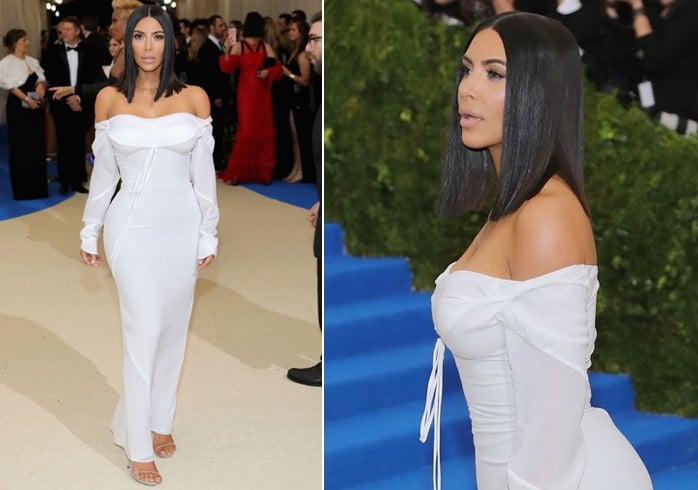 Mom of two, Blake Lively, looked unreal in her Atelier Versace gown. The golden dress with a neckline plunged till her midriff featured a blue feathered trail that transformed her into a dream-like mermaid. She never fails to bring the classy on the red carpets even when one is allowed to go and experiment with the weirdest odds. We are a fan of her Lorraine Schwartz jewelry, but we all know husband Ryan Reynolds is the actress’s most treasured accessory. 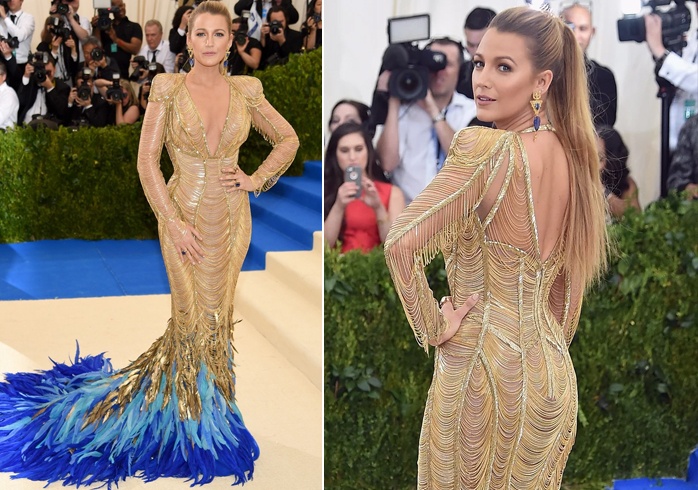 ‘Edge of Seventeen’ star was unbelievably edgy and all grown up in her black asymmetrical Vera Wang gown. The wardrobe choice was certainly mature for her but we can’t deny that she looked like a terrific young lady all set to conquer Hollywood. 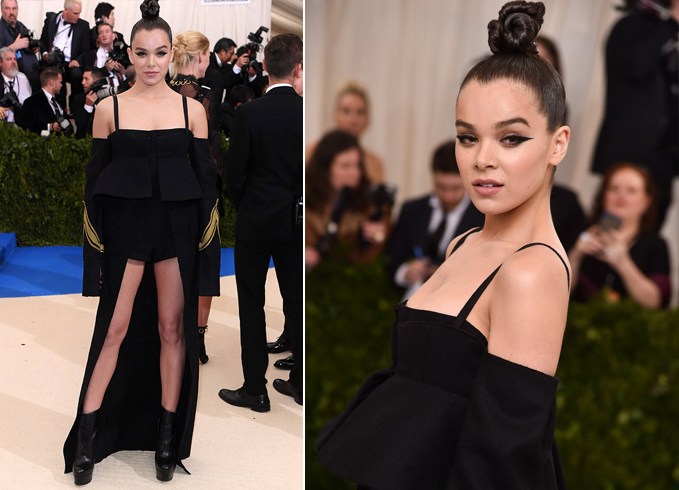 Well, only when we were about to crown Priyanka as the evening’s best dressed, the pop singer arrived with her conclusive high-fashion red-carpet fashion sense. Don’t invest too much energy into figuring this dress, it is straight from the ramp of Comme des Garçons autumn/winter 2016 collection. Don’t miss those Dsquared2 shoes, strings of which never end. Smothered in pink, the look was delicate, eccentric, pretty and confusing – all at once. These were our best picks from the event. Did we miss out on anyone who you think should have been listed? Let us know in the comment section below.

All The Stars At The 64th Vimal Elaichi Filmfare Awards 2019