Who wouldn’t agree that Alia Bhatt, the young and dynamic actor, has taken the cinema world for a spin with her spectacular performances but also drew out heart-stopping fashion appearances at various gatherings. Today’s article is dedicated to the fashion stories of the diva where either she imitated another celeb’s style, or her style was copied by a different celebrity. 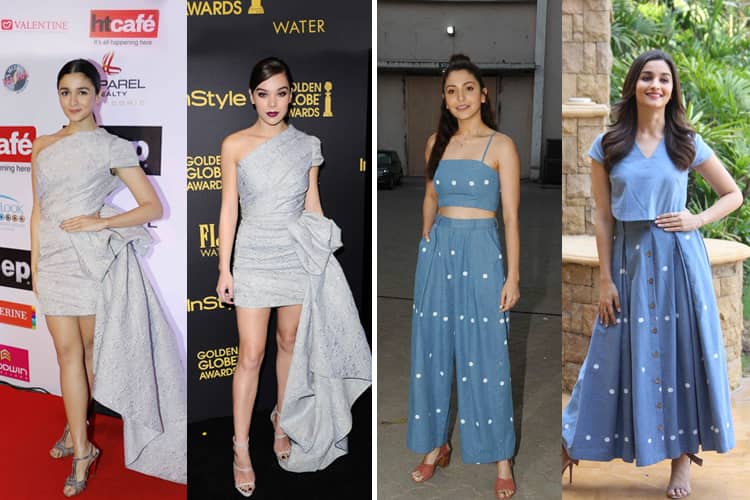 There is no hard and fast rule in this world that being a celebrity’s styles should always be unique. Every celebrity is an individual whose taste or choices match fairly with their co-workers or might find other’s style interesting enough to repeat, do you agree?

Alia Bhatt was spotted at the Vogue Beauty Awards in a flashy orange and white outfit from the label Christian Dior. This style was picked up by the diva from Jennifer Lopez who rocked it at the Hollywood Walk of Fame. Alia chose to keep her style young and chic with side-swept wavy hair, whilst Jennifer Lopez gave her style an elegant vibe with an updo. 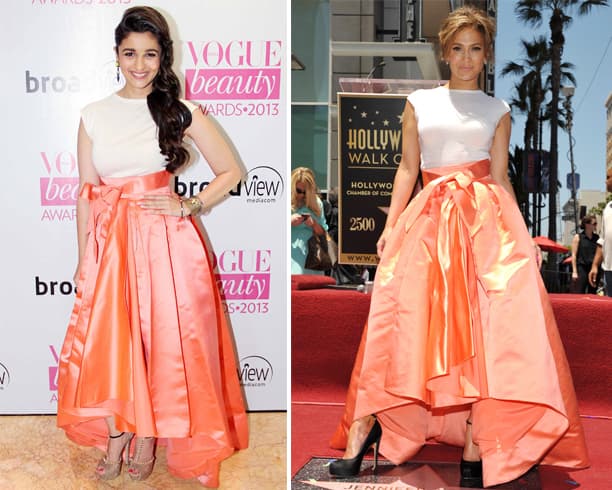 Recently for Priyanka Chopra and Nick Jonas’s engagement, Alia Bhatt picked an asymmetrically tiered black dress by Cinq A Sept. This style was previously spotted on Janhvi Kapoor during the Vogue photoshoot. Simple, fresh and natural makeup, casual hairdo was both the diva’s choice and we can’t find fault with it. 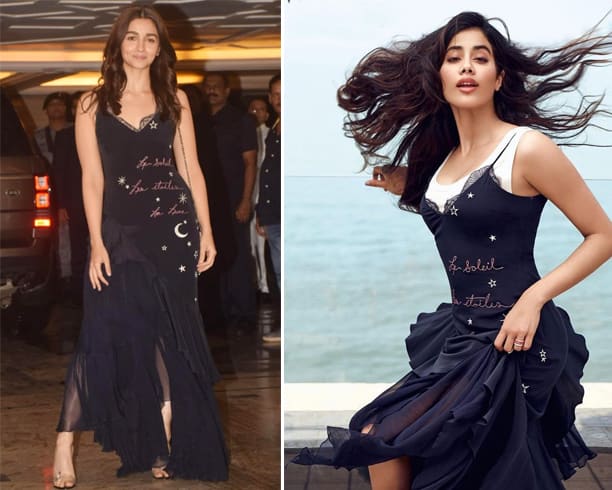 For Alia Bhatt, drawing out different styles isn’t a daunting task. She was spotted during one of her movie promotional tour in a white Lavish Alice outfit looking absolutely chic. This was an inspiration drawn from Mahira Khan’s style which the diva showcased just a week before Alia picked it up. While Mahira kept her hair wavy, Alia opted for a sleek updo. While Mahira kept it elegant with straight trousers, Alia turned it fancy by rolling up the trousers just an inch. 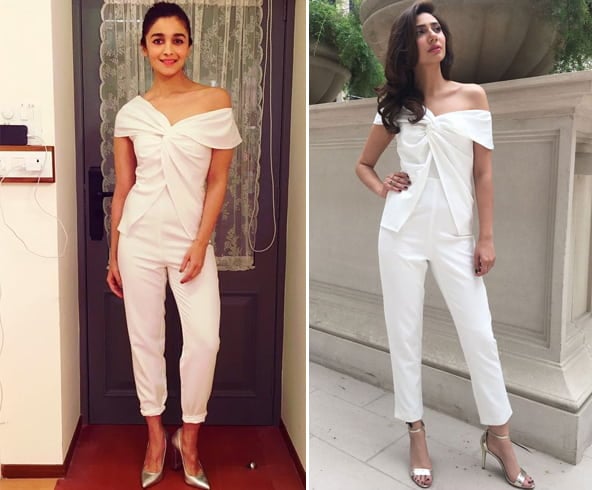 From chic pantsuit styles to flowing gowns, Alia didn’t fail to woo us. At last year’s Filmfare Awards Alia did the pastel lavender Monsoori gown which is copied from Hollywood actor Kelly Rowland. While the Hollywood diva coupled it with fancy hair color, Alia knocked us off with soft curls rolling down her shoulders. 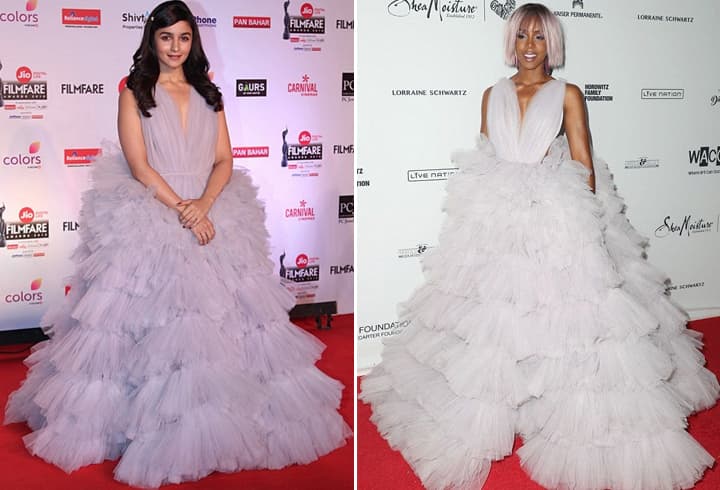 Who wouldn’t remember the fiery red Prabal Gurung style that Alia donned while she walked the ramp for Caprese handbags? That was one hell of a style that showcased shimmer, style, and delicacy in the right proportions. It was the same style that Tracee Ellis Roth was spotted in way before Alia rocked it on the runway. Alia found herself an interesting pick for the HT Most Stylish Awards and we fell head over heels in love with her. She dressed stunningly in a Reem Acra one-shouldered, a dress that had an interesting twist near the waist. A sleek updo and bare minimum accessories are always her take with red carpet styles and we love the simplicity. This was the same style that Hailey Steinfield graced for one of the red-carpet events and the diva did it splendidly with deep red shade lips. Kalki Koechlin not just is famous for the unconventional characters that she plays in Indian cinema, but also her whimsical fashion. She was spotted doing a Gucci dress along with a pair of black closed-toe shoes like a sweet school girl. This was the same style that Alia rocked a while ago with half pinned tresses and ankle strap heels. Shraddha Kapoor, a tough competitor to Alia Bhatt, was spotted doing the same style as Alia while jet-setting. From the black LBD to the camouflage jacket, Shraddha kept it very similar to Alia’s style. However, her choice of handbag was black while Alia went contrast with a dark coral style.

Kriti Sanon for Heropanti promotions and Soha Ali Khan for a public event picked the same Quirbox jacket that Alia donned for her 2 States promotions. While Alia kept it grooving with a black tee, Kriti and Soha chose to couple it with a white tee. 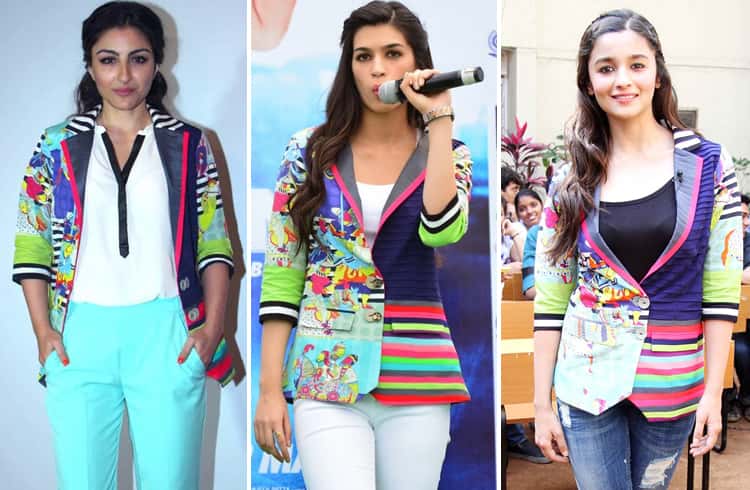 Looks like the white tee with a big heart printed on it was many of our Bollywood celebs favorite tee. It was initially donned by Alia Bhatt during 2 States promotions along with blue skinny fit denim, which was later spotted on Yami and Parineeti. While Yami coupled it with blue denim like Alia, Pari chose to do it with khaki green jeans. Off-late Twinkle Khanna’s styles have been inspiring, very modern and classy, don’t you agree? A while ago, she drew one such splendid style in a Kaylin lace-blocked striped shirt dress for an NGO event. And it was amazing to note that this style of Twinkle was an inspiration from Alia who rocked the style a few days before. 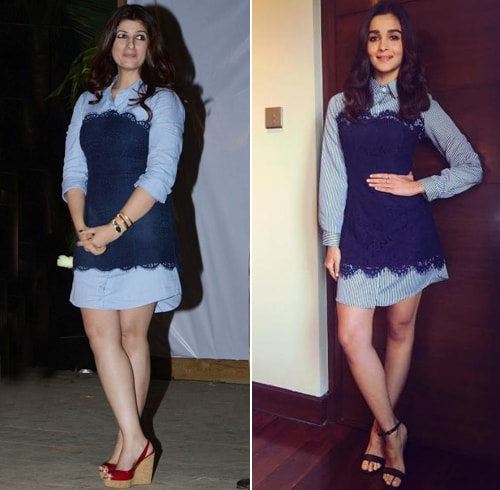 So, ladies, it would be fun to sit back and enjoy commenting on who wore what better, don’t you think? What are you waiting for?

10 Ways To Predict Your Baby’s Sex

Fashionlady - June 27, 2018 0
There is competition in every field of opportunity that we encounter in our everyday life and raising to the standards of the world is...