The newlyweds, Anushka Sharma and Virat Kohli are back and all set to share their joy and happiness with their near and dear friends and family. Like we promised, we are here with the details of their first round of celebrations I.e. their wedding reception ceremony in Delhi. Anushka Sharma decided to be a Sabyasachi bride and we love her choice. She picked a lovely bright red banarsi sari from Sabyasachi label for her reception ceremony. The bridal color, red surely complemented the new bridal glow on her face. Adding traditional jewelry from Sabyasachi heritage line, she looked grand and every bit regal. The red bindi and the sindhoor completed her bride style fabulously.

We wish the newlyweds lots of love and prosperity! And ladies, stay tuned for details on their upcoming celebrations! 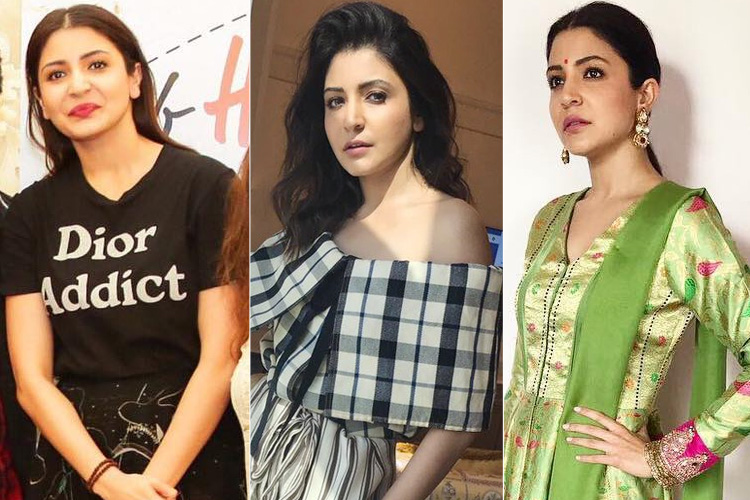 On one end the ‘Radha’ song from ‘Jab Harry Met Sejal’ got our feet tapping and the other the ‘hawayein’ song sent romantic shivers down our spine. And hence we can’t wait to feast the lovely duo, Shah Rukh Khan, and Anushka Sharma on the big screen.

While you are awaiting the big release just like us, step into Anushka Sharma’s promotional fashion closet for some fun and inspiration-

After a series of black styles, it was delightful to spot the lovely lady in a refreshing green hue. In a Manish Malhotra ethnic outfit, she stepped out looking as beautiful as nature. The gentle pinch of vibrant pink was very welcoming on the outfit. Sangeeta Kumar Hegde, the hairstylist tied up her tresses into a leek ponytail and Vardhan Nayak, the makeup artist kept her makeup minimal and glowing. Culottes style has always been fascinating yet tricky. During the promotions, Anushka showed how chic and easy it is to carry this fashion. She dressed boss like in an H&M high necked top over leather culottes from 431-88 by Shweta Kapur. Giving the formal style a street chic vibe were the Louboutin heels. 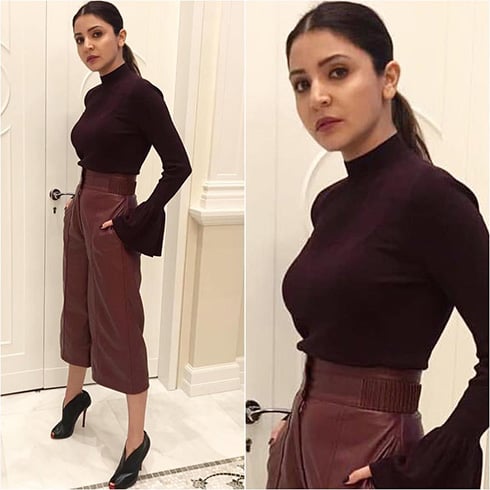 Black and Anushka Sharma are inseparable and if you have followed her styles keenly, you would agree with us. She was spotted clad head to toe in Dior couture during one of the events. Love the sheer skirt! We usually tend to keep one piece of the outfit in the solid shade when the other half is loaded with prints. But Anushka surprised us with her assortment of checks and stripes in one style with Rosie Assoulin outfit. And much more to our amazement, she added pastel pink pumps from Sophia Webster. That’s one minimalist avatar that spoke ample about the trends. Loved what you saw? We did too! Nowadays, even before we crawl out of our bed, we reach out for our phone and start browsing the Instagram, isn’t it true?

In our mind, we can see you nodding your head right away and smirking! And we are no newbies to this and look what we have stumbled upon this morning-

Anushka Sharma has bowled us all over again with her versatile styles while promoting her upcoming cinema, Jab Harry Met Sejal. Sneak in here for some insight-

As much as she is dedicated to her work, this lady is equally fun and doesn’t hold back her smile that sets spikes up everyone’s heartbeat. She chilled out during one of the promotional events in denim style throwing cool yet trendy vibes. Over Pull & Bear distressed denim, she wore an asymmetric Deme by Gabriela shirt in white. The white over white outfit would have failed if the shirt didn’t catch our attention. Falling till the ankle like a cape on the back side, it looked fashionable and hippy. With messy hairdo given by Franco Vallelonga and natural makeup by Vardan Nayak, she dug a sword right into our heart. 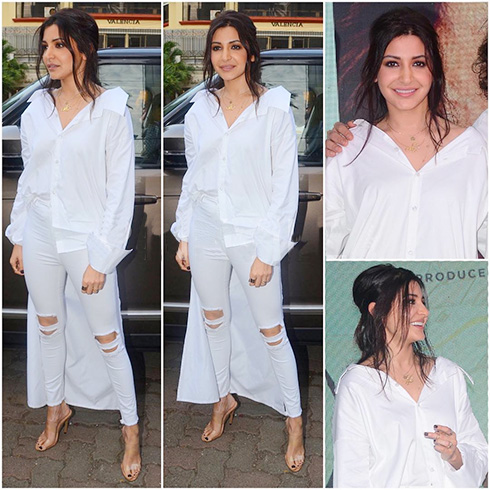 While the former was a modish look of Anushka, the latter was a 100-degree flip-over in style. She did an ethnic style in Raw Mango and proved her versatility even in the fashion terrain. She added a traditional pair of earrings from Purab Paschim by Ankit Khullar. With gajra, bindi and sleek bun hairdo, she rolled out classic ethnic vibes. The diva didn’t need any blush as the reflection of the sari brought shine to her face. Wise choice of color, don’t you agree? 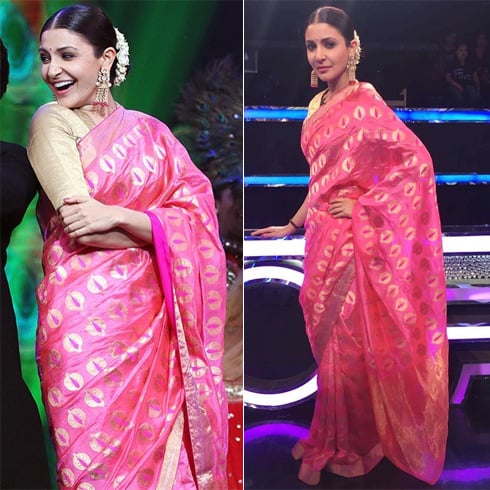 The stylist, Allia Al Rufai definitely deserves a pat on the back for such a terrific job of styling Anushka Sharma. Great job Allia! When two splendid actors come together on one screen, it a feast to the world of entertainment and proving our point right was Shah Rukh Khan and Anushka Sharma on Imtiaz’s Alis’s next ‘Jab Harry Met Sejal’.

Very much intrigued by this hit duo on-screen chemistry and their unbelievable expression of emotions, we picked up all the bread crumbs leading to the promotional events and trailer launch.

As interesting as we expected the trail to be, equally fashionable and stylish was the journey. Here are the B-town lady’s style compilations that left us longing for more of her looks-

Anushka stepped out to promote her upcoming film in a nautical tee from Tommy x Gigi and Pull & Bear denim. Though the look was very casual and simple, Anushka rocked it with brown colored Aquazurra sandals. Soft wavy hair, natural makeup rounded her look with ease. 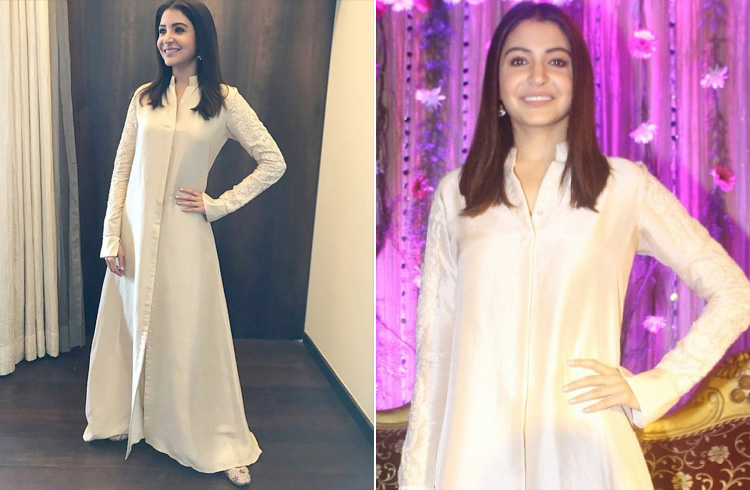 From Denim to Kurta, Allia Al Rufai made sure Anushka’s transition was smooth. Kudos to her! Interesting was the semi-embellished sleeves and the buttons rolled out onto the side of the denim. Don’t you agree?

Anushka Sharma and Ranbir Kapoor took up the responsibility of launching the fresh faces of Yash Raj Films banner. At the launch event, the diva was spotted doing a splendid black & white style. In a Tanieya Khanuja black outfit with floral prints, Anushka looked smart and chic. 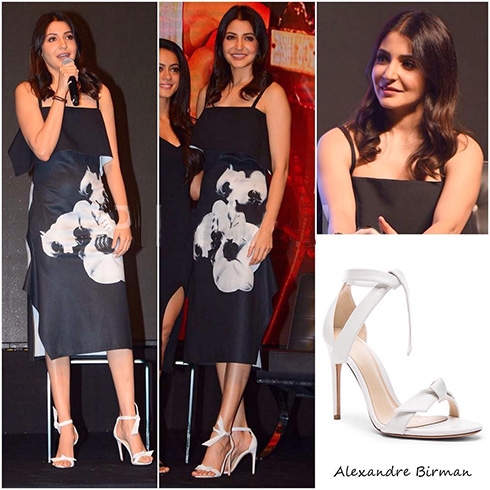 Anushka Sharma was spotted alongside her co-actor, Shah Rukh Khan at the launch of the new song ‘Beech Beech Mein’ from her upcoming film, ‘When Harry Met Sejal’. The duo did an all black style and Anushka aced it. In a custom made black tee over H&M jeans and Louboutin booties, she looked stunning. 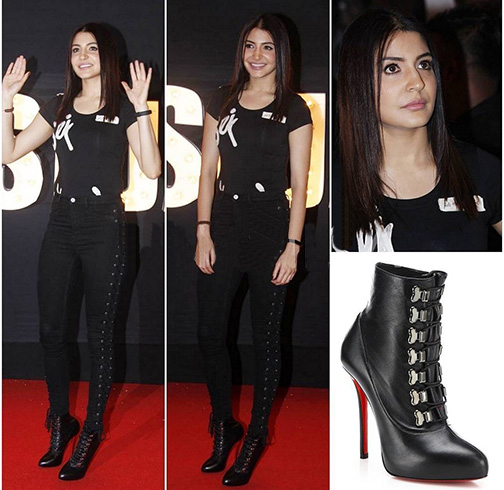 Throwback To The Women At SRK’s Birthday Bash At Alibaug