Bollywood’s boss ladies are working blazers to boost their cool while championing their powerful fashionista designation. 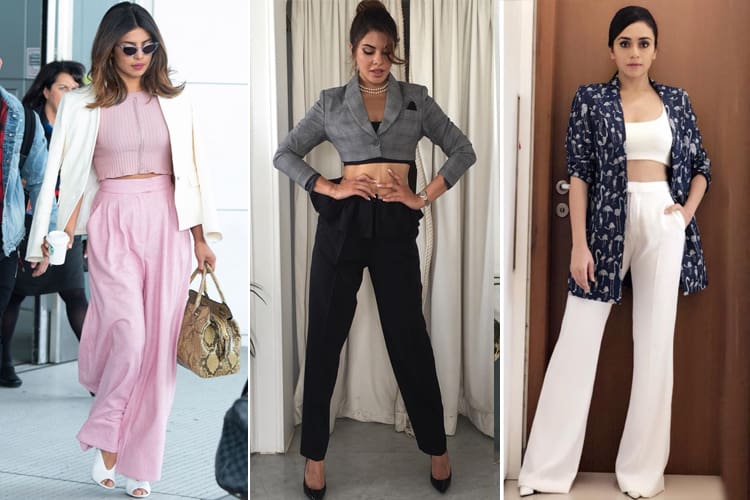 Using the slight dip in temperature to their stride, the women from B-town are ringing in a new trend of wearing blazers almost everywhere. Pulling out the mighty formal layering from the closets of their male counterparts, our fashion celebs are resorting to an assortment of semi-formal sports blazers in all shades, patterns, and fabrics.

Be it an event or at the airport or casual hangouts, the tinsel town actresses are going out and about sporting blazers to dress up their denims, short dresses, separates and even their swimsuits.

We are in love with this layering that’s adding all the due power to their appearance. Smart and sexy, these pretty celebrities are doing blazers just right.

Scroll through to see all the recent sightings of Bollywood actresses wearing blazers and you will surely understand it’s worth.

The pleasant L.A weather is giving Priyanka all the reason to layer up in style. Putting the usual long layerings and jackets behind her, this exotic beauty is working a whole lot of blazers to keep herself warm and definitely stylish. Stocking up her closet with a whole lot of them, Priyanka Chopra is teaming her cover up with all of her outfits. Spotted in blazers day in day out, her pristine white blazer seems to be the most frequently worn.

In a striking semi-formal look was Priyanka Chopra wearing a boot-cut denim and cream vest with a cream winter blazer. The Fendi handbag added some glamour to these basics done right.

A white blazer layering has been a constant for Priyanka. She, more than wearing it, has been carrying it as a chic layering to her summer outfits in pretty pastels. While on one occasion PC wore the white blazer over her powder blue maxi dress at the JFK airport walking alongside Nick Jonas, PC made summers look good, layering her lavender separates with the blazer.

On the rainiest day of Mumbai, Shilpa Shetty made it to a dinner at Bollywood’s favourite designer Manish Malhotra, wearing a gingham blazer over her YSL tee. Dressed just right for that slightly chilly evening, Shilpa paired her blazer with a Stella McCartney sling and a pair of striking blue peeps from YSL. Shilpa surely styled effortlessly for her date night with friends.

Jacqueline’s blazer looks are goals. Posing for a magazine photo shoot most recently, the woman absorbed all our attention for working a striking red Zara blazer over a Tommy Hilfiger swimsuit. Bold and beautiful was this blazer look styled by Sonam Poladia.

At Cannes this year, actress Rasika Dugal worked metallic sheen topping with Raw Mango jumpsuit and a golden blazer from the label. To add some good looking feels to her semi-formal look, Rasika impressed us with her way of working the trending blazers. Styling credits to the team of Who Wore What When.

On her promotional run up for Parmanu, actress Diana Penty gave us a whole lot of suits ups. For some deviation, the woman surprised us wearing a basic look to the T. Amping the glamour quotient of her basic black tee and blue ripped denim, Diana made heads turn, throwing on a well-fitted white blazer.

Giving her monotone look an instant upgrade was actress Parineeti Chopra at the airport. The woman wore her rust orange mini dress and tan boots with a blue blazer layering. Contrast play done right, Parineeti made for a relaxed yet chic airport look as she jet-setted.

With monsoons setting in, we are positive about doing blazers on one of those windy days this season.

Is It Safe To Wear Too Much Makeup? Let’s Find Out

Where to Buy Wedding Trousseau in Chandni Chowk