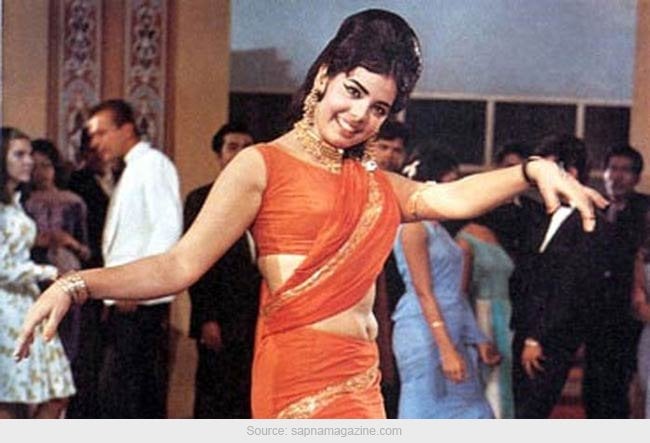 Bollywood, can very well be claimed as India’s true passion (Assuming cricket is our religion). Last year we celebrated 100 years of Bollywood. But this doesn’t just mean 100 years of cinema. It also means, 100 years of trends, set forward by icons and replicated by fans nationwide. Whether a fan or not, you can’t deny that Bollywood is one of the leading influences for Indian fashion. And as the industry has grown and matured, so have these trends.

How about just a quick journey through these changing times?

This was a recently independent India. The British had left, but their influence still hadn’t. The dressing was somewhat formal with the male stars in dapper suits and the women in elegant sarees inspired by the overwhelming gowns, and blouses which held a slight resemblance to the English corsets. The hair was also rolled and curled and worn in graceful buns and ties, while a string of simple pearls adorned the necks.

The formality in outfits continued, but India began to see a new age of sensuality. The blouses became shorter, and the sarees were tighter. Shoulders were bared and a hint of the leg teased through the dance moves. It was a time when such confidence was both admonished and revered. Soon we were introduced to colour in films with the new technology, and we began to see an explosion of shades of all kinds. This was just the offset of the color bloom era, the little preview to the time of ‘Flower Power’.

Fashion was fast evolving and trying to find a place of its own at this time. It was the era of experimentation. With the bright and bold printed cropped shirts to the graceful one colour sarees decked with only beautifully lined eyes. On one hand was a delicate, classical Indian girl soon to blossom into a woman (how can we forget those coy Sharmila Tagore looks) and on the other hand we saw the bold and spunky girl in printed tops, knotted at the midriff worn atop a seemingly skimpy skirt (remember the iconic polka dotted top Dimple Kapadia wore in Bobby?). Eye make-up was thick and dramatic, followed by equally large hair. It was a time in which fashion contradicted itself, just trying to find its roots.

Fashion in Bollywood seemed to settle down at this time. It was the time of conflict for actors now vying for attention, rather than their outfits. We began to see chiffons and synthetics, bright colours worn with equally bright red lipstick, the doe eyes of Sridevi and the long braids of Rekha.

As far as I can remember, the 90’s seem to be the last decade before the brand invasion. This was the time of the iconic movies of this generation – Hum Aapke Hai Kaun, and the DDLJ. I still remember everyone dreaming about Madhuri in the beautiful blue saree and begging their parents to get them the green and white lehenga from her popular song. There was also Kajol, with the simple Indian girl in Europe look, with the long skirts and the berets. In the latter half of this decade we saw her in the sporty look of Anjali, the rugged jeans, and the bright Tshirts with a cap.

Around this time, it became a symbol of status to see what brands the celebrities were wearing. Now it’s all about ‘Who are you wearing?’ on the red carpet rather than what. Designers like Manish Malhotra, Falguni and Shane, Sabyasachi, Masaba, Anamika Khanna and so on are the sought after labels for Bollywood actors. And of course, any status is automatically raised if you wear an international designer like Armani, Elie Saab, or the classics of Chanel and Prada (this seems to be Sonam Kapoors mantra).

No doubt that these looks are very pleasing to the eyes, maybe more so today than those of the yesteryear stars. But even then something lacks – the originality and the star power of each trend. Back in the day, the designer didn’t matter as much as the aplomb the actor had to pull of something different: like Sharmila Tagore being the first one to wear a two piece on screen, or Zeenat Aman in her controversial looks, and yet they were called beautiful and sensuous, not ‘hot and sexy’.

Gone are the decades when stars created trends and rippling sensations through just their fabrics, influencing the dressing of an entire nation. What we see today instead are stylists draping outfits on celebrities so they can drop brand names to justify a status.

What do you think about this fashion revolution? Do you agree with me on this?

Facts And Tips On Yoga For Diabetes As Advised By Experts

Here’s How To Wear A Silk Tunic Top And Flaunt Your...

Fashionlady - November 18, 2015 0
With long flowing dresses, leggings, dress pants, palazzos or even with your ethnic Indian wear, the humble answer how to wear a silk tunic...