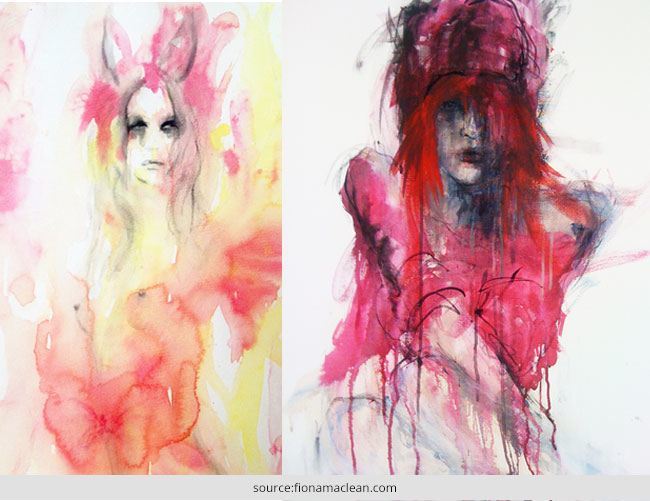 In 2004 I decided I wanted to take my career as an Artist/Painter more seriously and wanted to concentrate more on this rather than that of the Illustration. In 2005 I was accepted into Parsons School of Art (the New School) in New York, studying Fine Art. Unfortunately, my studies were cut short due to family tragedy and my art career was put on hold. Because of this, I didn’t paint for a couple of years. However something in me wanted to get back into creating and in 2010 I completed two Artist Residencies at the School of Visual Arts (SVA) New York, in Painting and Illustration, helping me develop a new direction and a new body of energised work. I was excited again and wanted to paint again. This is where I gained the confidence and recognition from critics and peers to move forward with my career. In turn, resulting in my starting to sell paintings and being recognized by Art buyers and collectors. My career got an extra boost in 2013 being chosen by Saatchiart.com as one of the strong emerging talent in their ‘One to Watch’ Emerging Artists. I think what I have learned thus far is that you have to stay truthful to what comes from you creatively and do what you are passionate about and then PERSERVERANCE.

As an Artist I’m fascinated by the fleetingness of youth, beauty and sexuality and the elusiveness of these particular elements, trying to capture those elements within my portraits and figurative work. I’m always curious to discover whom the subject is behind the façade, trying to get to the essence of the person, and bringing to life the portrait or figure.

I’m very interested in the sexuality of the image/subject, their beauty, and who they are. Evoking an element of ‘drama’ to the subject where the viewer can ‘draw their own conclusions to what this person’s ‘story’ maybe. I work mostly from photographs I take of the subject or sometimes from random photographs as reference. But for a portrait I do often take numerous photos of the person, as I need to capture the eyes! My portraits and even some of my more figurative work I almost always have the eyes as a focus. If I can’t get the eyes of the sitter right I am not happy with the portrait. I work mainly in Acrylics, using them like a watercolor and I also work in Oils too for my portraits. At the moment I’m working on a series of paintings inspired by my travels through the beautiful city of Barcelona.

Fiona’s work has been described as “hauntingly beautiful and that her portraits have traces of glamour and intrigue beneath their honesty. Her subjects are intensely engaging extracting and translating fragments of secrets of the soul.”

Why And How You Should Use Honey For Dry Skin

In And Out Of Paris Fashion Week 2016

Top 5 Fringe Bags for the Boho Look that Add Luxury