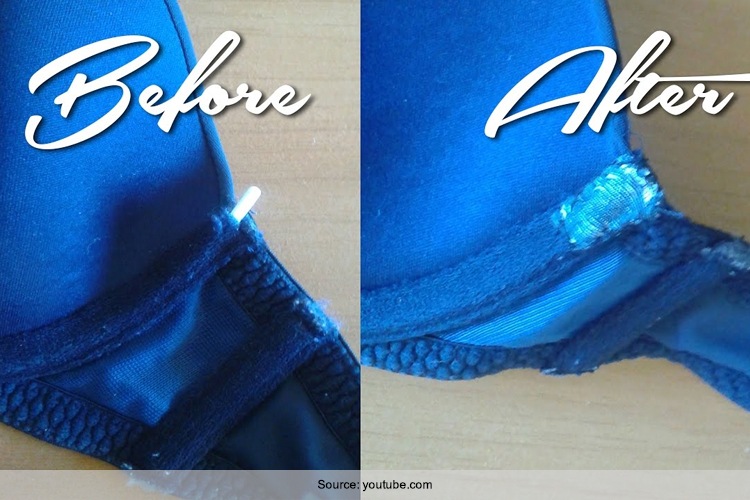 How many times did you get poked by your underwire? Ugh! One gets the feeling of almost throwing away the damn bra, thinking that’s the end of it. Wrong! Why not get smart instead and know How To Repair An Underwire Bra.

How to get the bra back in business? Well, getting the bra wire repair done is not time-consuming as you thought. It’s a matter of few minutes.

Why suffer from the painful poke in your ribs when you can nip it in the bud?

Parts Of Underwire Bra – An Overview

A lingerie item is not just one piece. It is made of several parts and pieces which enhance the overall fit of the bra. Take a look how.

Having shown you the big picture, let us now get to the corrective measures which can help in How To Repair An Underwire Bra.

This process needs an underwire bra repair kit which comprises of bra repair hook and eye.

The bra angel repair kit comes of use when you are in an SOS situation. It is a lil device which can help you tackle those small emergencies (unexpected ones) and can stop your bra wire from continually poking through.

How To Escape the Underwire Problem in Future

Sharing three of the available options with you:

Option A: You can evade the problem of underwire for bra to repair by removing it entirely. For this, you need to make a little hole in the fabric in the same spot on the other cup. Once done, remove the second underwire, too.

Option C: Going bra-less is yet another option which can be considered, even if the 1970s bra-burning episode was more than a myth.

How To Avoid The Underwire Bra Problem

Read this line from the American based bra manufacturer Wacoal “An underwire will usually poke through a garment for one of two reasons: Either you are wearing the wrong size or you are washing the garment incorrectly.”

Well said, and how!

A little more of the insight from Italian lingerie maker La Perla which says that all their underwire bras have a protective rubber tip. “This rubber tip protects the garment and one’s skin from being exposed to the sharp edge of the wire. After being circulated in a washing machine, the fabric rubs again the rubber tip, wearing out the tip and the fabric, often causing the wire to become exposed.”

Watch this short video on How to fix bra underwires. Don’t just like it, but implement it too. All the best!

How To Buy Your Assamese Traditional Sarees

5 Bras For Small Breast For A Sexy And Fabulous Look

Fashionlady - April 19, 2017 0
We all buy clothes that make us look presentable and feel beautiful, but that’s about what is going on, on the outside. What we...