It is no surprise that Indian Cinema has taken a turn and we are finding ourselves getting familiarized with great real-life heroes, isn’t it? There were times when the film industry brought fictional characters to life and focused on heroism but nowadays, it’s the real-life heroes that are being acknowledged and appreciated.

Being a part of one such film called Soorma that focused on the life of hockey player Sandeep Singh was Taapsee Pannu. The diva has not just impressed us with her choice of films but also with her fashion splurge.

Every promotional event that the diva graced, she ensured that she remained the light and thunder of the event in play.

Let’s take a look at the splendor of Taapsee’s styles.

It is highly unlikely that we blend more than 3 colors in any fashion outfit, isn’t it true? But Taapsee for one of the promotional event picked an Esha Sethi Thirani separate style that fused the brown, black, red, and grays. With side-parted, side-swept curly hair, orange lips, and clear skin, she rounded her style. Looks like accessories are the last thing on Taapsee and her stylist’s mind. Wearing a casual tee on a pair of the slit, embroidered pants by Namrata Joshipura was Taapsee looking fashionable best. Tying up her tresses into a bun and with ankle strap black heels, she was sporty and sexy. 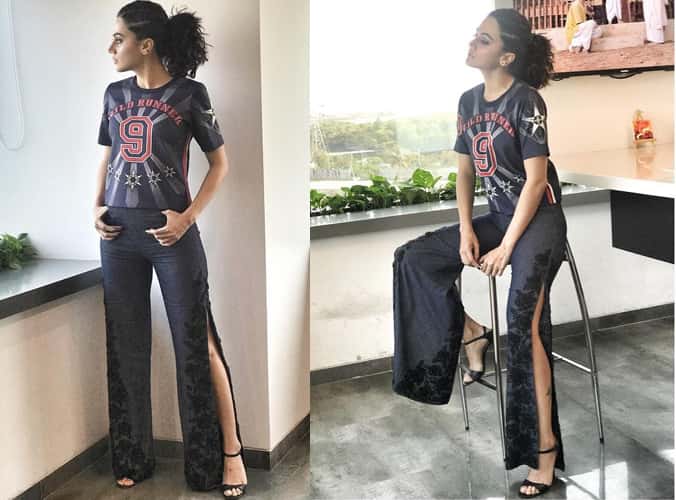 In Two Point Two and Zara:

Totally sporty and like a street hottie was Taapsee Pannu at one of the promotional events of Soorma film. Wearing Two Point Two baggy harem pants under a white tank crop top and Zara metallic bomber, she posed like a boss! Tying up her tresses and keeping her makeup kit fairly out of sight, Taapsee nailed the fancy pants style. A dressy teal green and white mini dress by Anand Bhushan was her choice of outfit for Soorma promotions. The blazer style collared add-on of the outfit added a layer of fashion and we love it! She tossed in a sporty feel with her white sneaker style. Tying up her tresses into a ponytail and with dangling earrings, she closed her glamorous style. 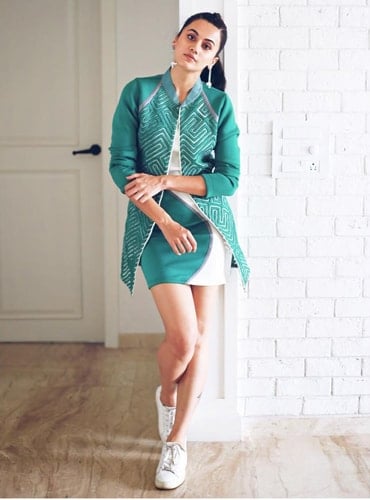 For one of the interviews, Taapsee Pannu rolled out a dressy style in metallic sequined Esse by Sahib and Sunayana skirt along with a white H&M camisole. While the metallic skirt did the speaking, the white cami neutralized the style. Nude pumps, half-pinned, center-braided hairdo, and bronze finish makeup created the knock-off style of the diva. Kudos to Seema Mane, the hairstylist for taming the frizzy curls of the diva. Nicky Rajani, the makeup artist, chose to paint her in shades of natural tones. Styling credits go to Devki B.

How to Sew Beads onto Fabric: Tutorial for Beginners

Latex and Leather Fashion Diaries To Take Inspiration From

Fashionlady - September 24, 2018 0
It is all in the news and we have it here too, the details of big fat engagement party of Mukesh Ambani’s dearest daughter,...