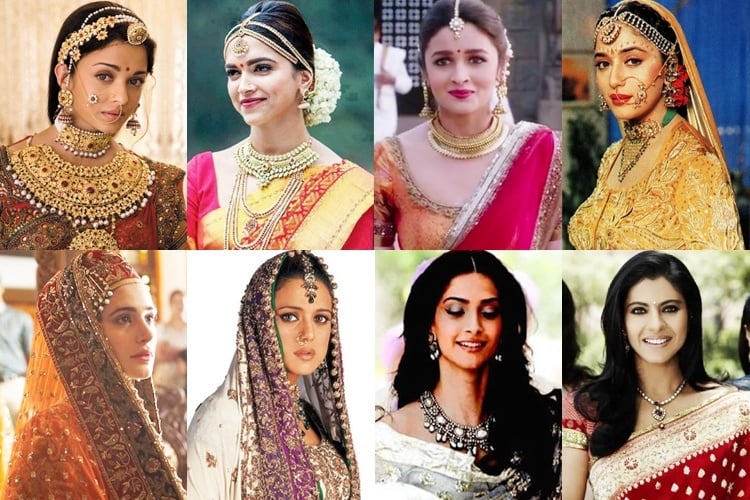 If you are a Bollywood junkie and crazy after first-day-first-show each Friday, you will also be a lover of filmy weddings. Yeah, a typical Bollywood style wedding on reel takes you through yards of bridal lehngas and larger than life jewellery that pushes you to shop for them. In the heart of heart, each lady has one thing on her agenda “Main Madhuri Dixit Banna Chahti Hoon” when it comes to shopping bridal costumes. In fact, the bridal oufits have all the glamour that stays on in memory long after the movie has been screened. Here is a list of the best Bollywood movie wedding outfits every desi girl should wear to a wedding to get eyeballs, applause and become a topic of discussion in get-togethers.

This timeless beauty who made her way to Madame Tussauds virtually lit up the screen in her yellow golden dress in Hum Aapke Hain Kaun. Of course, Madhuri’s dazzling smile made her picture perfect and graceful. The bespoke jewelry she wore with flowers in her hairs made her look the true Indian bahu. 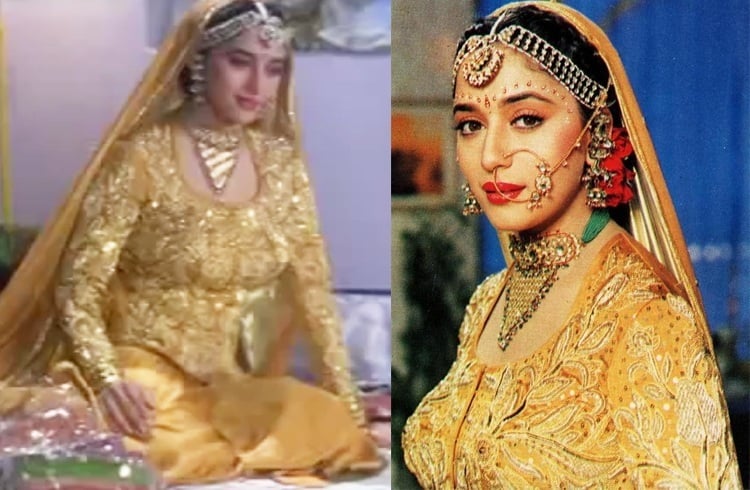 Her eyes, face and acting has been lighting up the screen for several years. Kajol, the dusky beauty of Bollywood looked top notch in a bright red sari with gold borders and colour detailing in My Name Is Khan. She wasn’t the lehnga clad babe but the modern contemporary bride with oodles of charm. 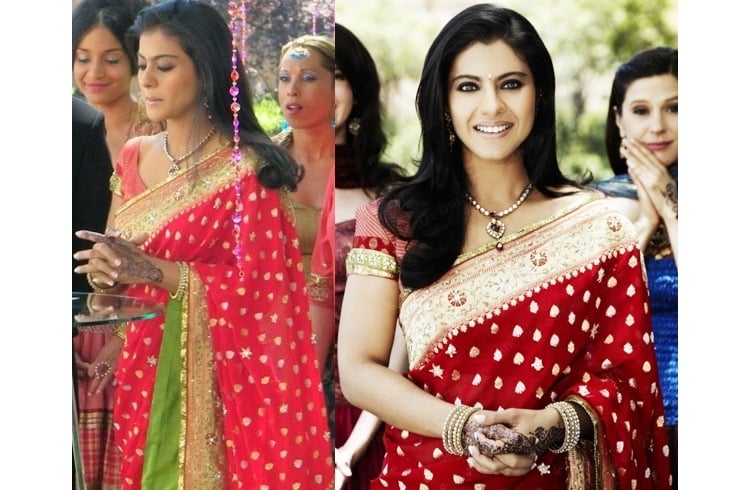 This one is traditional golden-red Kanjeevaram silk sari that even the Chief Minister Jayalalitha might give her right arm to wear. Deepika Padukone looked simply exceptional as a south Indian bride in the blockbuster movie, Chennai Express. What looked equally stunning was her cummerbund, and jewelry items such as maang tikaa and coin necklaces. Kat is undoubtedly one of the most beautiful actresses of Bollywood today. Her exceptional bridal dress in the movie, Singh Is King stood out the most. Watch out for this pink-turquoise lehenga of hers with matching jewelry, where she looks drop dead gorgeous.

[Also Read: How to Get Your Salwar Suit Stitched] The Zaara girl in Veer-Zaara, Preity Zinta looked a prospective bride’s dream come true in a lehenga designed by Manish Malhotra that had shades of cream, purple, green, light blue, pink and orange. 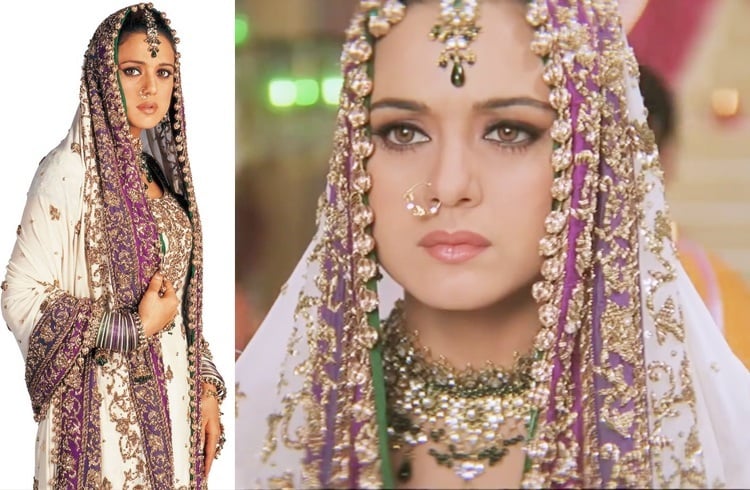 The Bunty aur Babli girl Rani is an exceptional actress who was soft and convincing in her classic red bridal look in the film Kabhi Alvida Naa Kehna. Her traditional embroidered red lehenga won the hearts of many an audience. Can we ever miss out on the lovely and enigmatic bridal costume worn by Vidya Balan in the film Parineeta which had the traditional stamp of brocade silk?

Who can resist watching out this gorgeous green-eye lady of Bollywood, Aishwarya Rai. If her Cannes dresses wooed the world, her Mughal-cum-Rajput bridal dress of red-maroon sari in Jodha Akbar film made her super star material. It was deisgned by Neeta Lulla who used saffron, emerald, copper and henna red in the outfit. 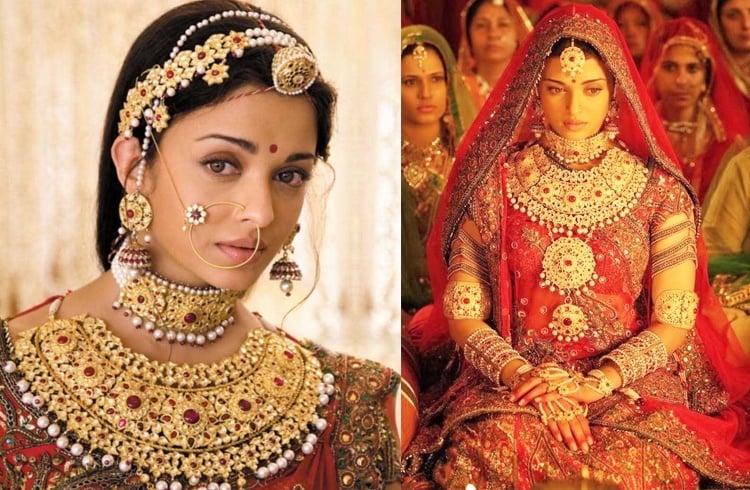 Bebo looked the quintessential Indian bride in the film 3 Idiots. Her heavy brown orange Anarkali dress and pearl golden jewelry made her look royal and exclusive. 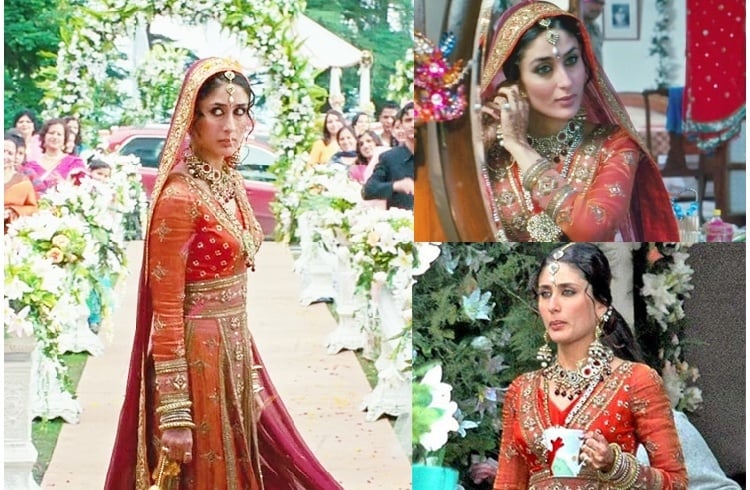 Ranbir Kapoor’s performance in Rockstar was outstanding. But what was mindblowing was the Kashmiri outfit worn by his female co-lead Nargis Fakhri for her wedding. Any guesses on the inspiration behind the regal costume? It’s Traditional Mughal weddings, so you can imagine how regal it looked. Our desi girl Piggy Chops looked a fab bride in Kaminey. You can call Priyanka one of the boldest and simplest onscreen brides ever. Her traditional bridal green costume was not only elegant, her makeup was also highly admirable.

Lolo is one of the prettiest Bollywood actresses we have in Hindi cinema. Her traditional bridal trousseau color in the film Zubeidaa was fantabulous where she looked an innocent bride in the ethnic costume perfectly well. Alia babe looked fresh and effervescent in her South Indian bridal look in the Chetan Bhagat-inspired film 2 States. Her half saree looked every bit resplendent. Nobody can take eyes off her when you watch Sridevi in her bridal costume in the film Khuda Gawah. The gold creamish costume looked as divine as her. 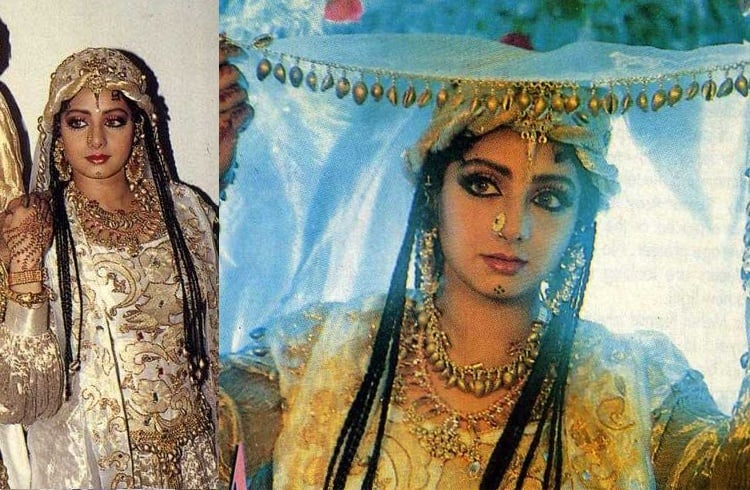 Ever imagined white as a colour for an Indian wedding? It came true on the silver screen with Sonam Kapoor as Aisha dressed in it that made viewers fall in love with her head on. 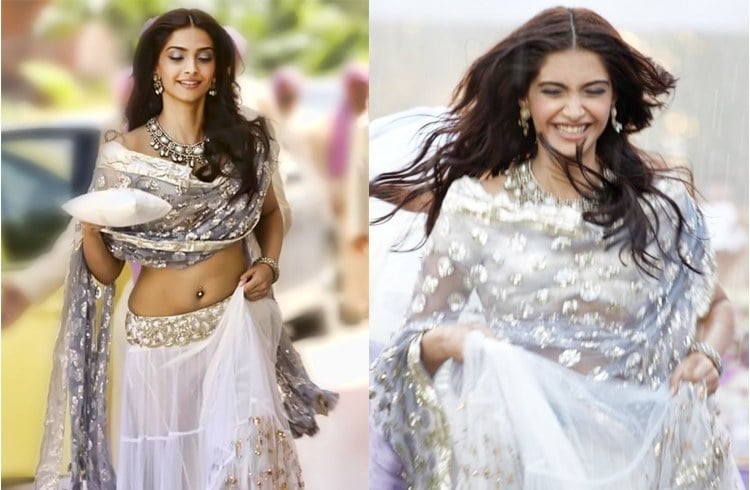 In the film Dhadkan, Shilpa looked shining blue in a blue bridal lehenga that had heavy golden work on it. Now that you have seen Bollywood’s leading ladies dressed in bridal attire, it’s time to tell the fashion designer next door to make your bridal outfit as ‘gold’ or as ‘red’ as in your favorite Bollywood actress film.

We Have A Range Of Indian Skin Tone Types To Celebrate,...

Time You Learn About These Trusty Benefits Of Apricot Juice

Colours to Wear For a Sangeet

How To Get Rid Of Bra Fat With Simple Exercises