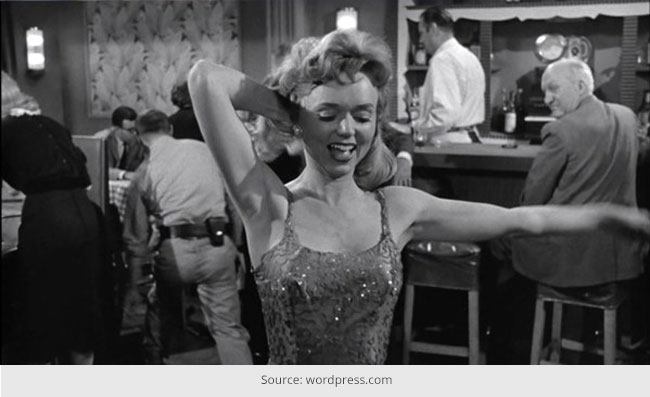 There was a certain oomph factor with our golden girls back then in the 50’s, 60s  and the 70s – much of which has evolved or has been lost in the abyss of ‘filmmaking’ and in the name of modern age ‘fashion’. From mini dresses to sexy tunics, flaunting real curves with natural élan to smoking a cigar in an LBD- Hollywood gave enough space to the leading ladies back then to flaunt their feminity, just as they loved it to be.

Taking a cue from the cat eyes, the mini dress, the sensual tunics, opaque tights and the quintessential big hair do- allow us to take you back in time, when black and white movies ruled and quaint charms of our onscreen Goddesses who stole our night’s sleep!

Holly Golightly in Breakfast At Tiffany’s in 1961- enough said, and if you thought back then the women were only elegant by playing submissive, you were wrong. Audrey Hepburn, famous for the role in the aforesaid Hollywood classic was and still is an inspiration the world over for her glamorous ways and the LBDs she flaunted in the classic movie. High fashion benchmark was set by the silver screen actress in the 60s for sure, and Audrey was the epitome of fashion iconic grace and elegance. Her style didn’t stop at the movie though, it evolved for every film she signed henceforth- cigarette pants to the LDB, cute ballet flats and minimal accessories; not to forget, the long ciggy- once again, enough said!

Talk of the swinging sixties and we couldn’t afford not to mention the gracious diva who burnt the silver screens across many cinema halls the world over- Sophia Loren, – famous Italian diva, a bombshell in her own rights, and the first to win an Oscar for foreign language acts (Two Women), her wit and intelligence combined with her quaint italian beauty- perfect recipe to name femme fatale. Who ever thought back then the ‘fishnet stocking’ would have been reason enough to steal many men’s night sleep!

Can the 50s be complete without mentioning hot favourite of Playboy- Marilyn Monroe! Of sensual ensembles to risqué and chic fashion back then, a trendsetter she was with those curves (size 12), perfect hourglass figure that made many men swoon (a notable president of the USA too), and the signature style- halter dress or the body hugging ensembles, sweater sets, her hair and those luscious red lips- Marilyn we miss you tons!

She lived a ‘fairytale’ story as a blue-eyed lass and an academy award winner, but was known more as a fashion icon who played minimal for the fifty-two years she lived. Elegant was the name of the game when it came to fashion for Grace Kelly, quite attainable and very American to say so, while wearing a simple twinset with pearls to adorn her neckline, Capri pants for the bottoms, Grace still made waves. Immaculately dolled up yet minimal once again, Grace was known for her hair, her makeup and poise- hence an iconic lady with impeccable tastes, we want the circle skirts back as much as we would want the plain beige trousers, sleeveless turtlenecks, gorgeous gowns, tailored pants and the famous starlet sunglasses with ‘The Kelly Bag  aka “sac à dépêches”‘

Bond was happy with his girl, and this proves the old adage “Behind every successful man is a woman holding his back’- Ursula Andress did just that, and in complete style. Honey Rider (Ursula Andress in Dr. No) made waves with her ‘white bikini’ appearance in the movie back then. This brought her to doorsteps of fame- little did the Swiss-born actress expect the glorious tag of a ‘sex symbol’ all too soon on her- thank you white bikini.

[Also Read: 9 Iconic Looks you can Steal From Your Favourite Hollywood Actresses]

Perception versus reality, back then was a very thin and an almost invisible line, which helped the gorgeous PYTs of the silver screen grow and explore the realms of fashion, sans the need to undress for nothing!

Motherhood Is A Journey That Must Be Cherished – Make It...

How To Remove Deodorant Stains From Clothes

How To Look Like Bollywood Celebrities During Wimbledon Matches!

Fashionlady - July 13, 2015 0
The whole world is going crazy at the moment for two specific reasons (well, there may be more than 2, but our fashion world...