Doesn’t your heart long for a chilled out party in the midst of a long tiring week? Yes! Jumping right on the thought takes courage and skilled planning and looks like Manish Malhotra is the master of this game. 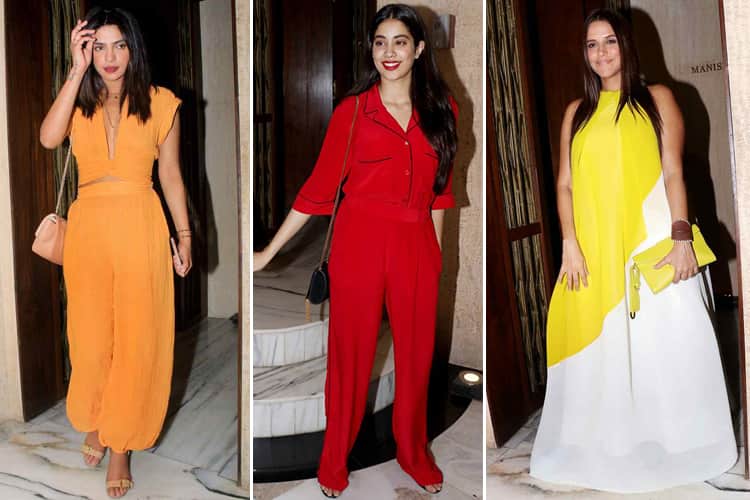 The designer sprung upon the Bollywood squad a surprise party to chill and looks like most of them cleared their calendars and made it to the rocking party. Let’s take a sneak peek of the attendees and their ravishing styles

On a hot summer evening, the most obvious pick would be an easy-breezy anti-fit outfit, won’t it? And we know one diva who stands true to this thought, yes! Of course, it is Neha Dhupia. In a leisure looking color-blocking maxi by Payal Khandwala, Neha Dhupia graced the party looking absolutely refreshing. She rounded her style with matching colored Jimmy Choo clutch and powder blue Chalk Studio handmade shoes. Soft straight hair, smokey eyes, and glossy nude lips balanced the splash of the neon-colored outfit. 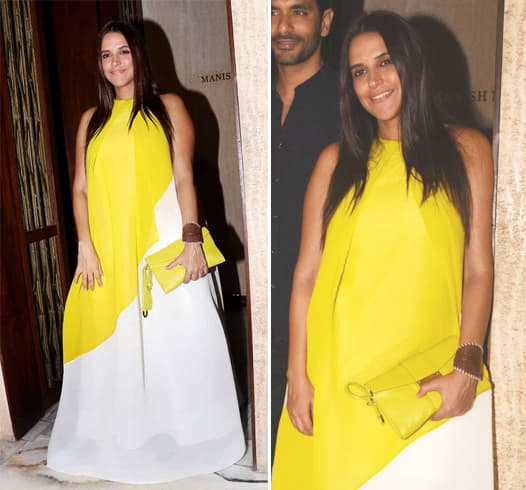 The sweet adorable looking youngster, Shanaya Kapoor, daughter of Sanjay Kapoor attended Manish Malhotra’s party dressed pretty in a floral mini dress and metallic sandals. The pop of color with her lips and the side-swept wavy hair gave her style a peppy vibe. 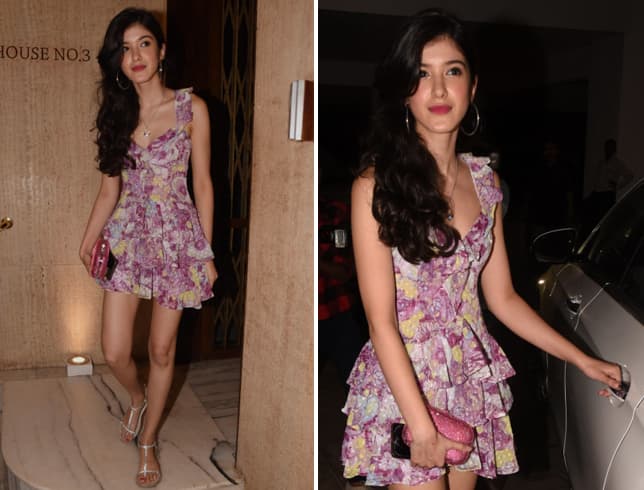 Posing alongside her bestie, Shanaya Kapoor was Khushi Kapoor in a white crop top over Alice and Olivia green pants. Simple hairdo and subtle blush toned makeup rounded her style. 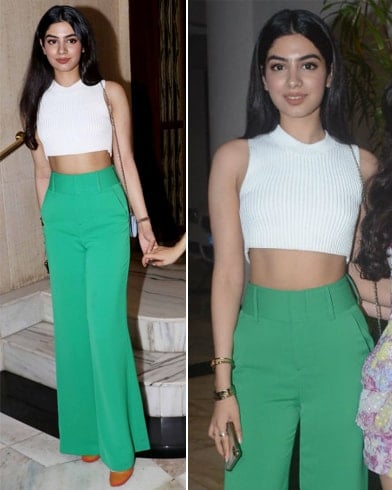 It was a delight to spot PeeCee at the Manish Malhotra’s party. The diva was spotted doing a crop top and harem pants style by Three Graces in a mango yellow shade. Nude sandals, sling bag accompanied her style. With layered necklaces, deep-toned makeup, she stepped out in style like always. Classy and trendy was Karisma at Manish Malhotra’s bash in a Stella McCartney velvety printed sweater over a pair of crop pants. Absolutely love her Hermes clutch. It sure added a classy vibe to her style. Wearing black peep toe high heels, with a red pout and casually brushed hair, she looked stunning. 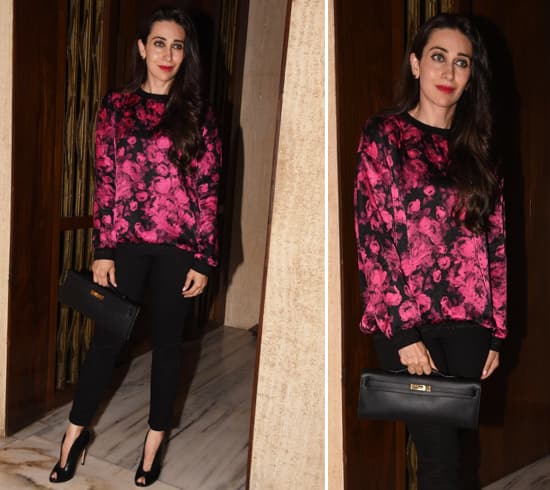 Looks like the young Kapoor sisters are in for some solid colored fashion. While Khushi rocked green pants, Janhvi chose to go red with her jumpsuit style in Stella McCartney label. She complimented the subtle black borders along the hems of the outfit with a Yves Saint Laurent sling bag in black. A red pout and casual hairdo rounded her ensemble. 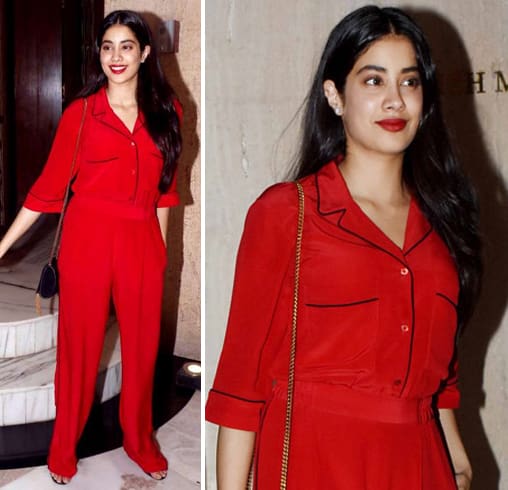 Sara chose to go simple and sweet to Manish Malhotra’s party in a stone gray floral prints dress by Ted Baker. By matching her pumps with the shade of her dress, and with floral Gucci sling bag, she looked lovely. Ananya Panday, Chunky Panday’s daughter who is currently filming for her debut, Student of the Year 2, was also spotted at the grand party. In a floral off-shoulder crop top and tiered mini skirt, she looked cute and stunning. Love her Dolce & Gabbana ‘Queen’ handbag! 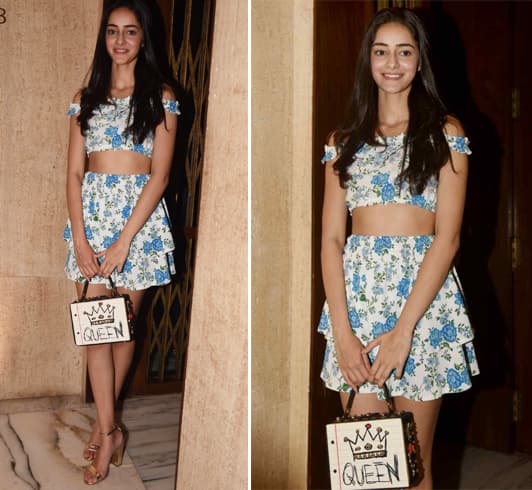 It was black for all the three ladies for Manish Malhotra’s party. While Sonakshi opted for body-con mid-calf length outfit with heels, Huma chose to do an easy-breezy maxi style. Athiya Shetty like the other ladies went for black style with a thigh-high slit and paired it casually with sneakers. 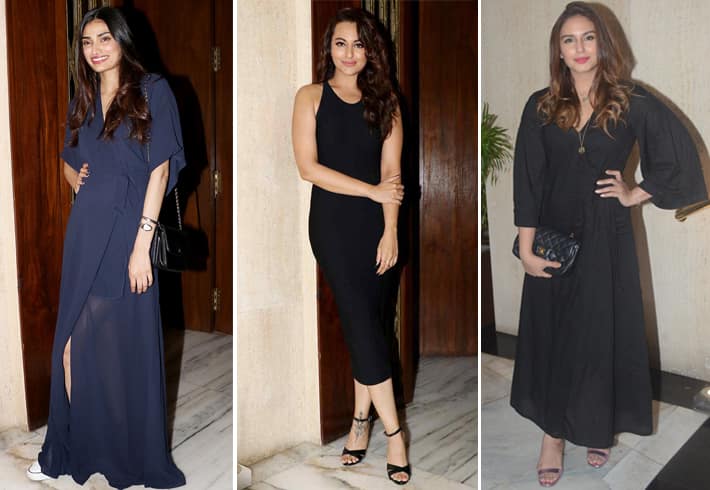 Sophie chose a floral dress from Self Portrait like many other celebs and looked fab. Adding a pair of black ankle strap heels, and Valentino handbag, she closed her splendid mini dress style with great ease. It was raining rainbow for Anu Dewan at Manish’s party. She opted for a multi-colored fringe dress by Missoni and lit up the evening. Adding black pumps and Louis Vuitton clutch, she rounded her fancy style.

It was red for both Yami Gautam and Kanika Kapoor at the Manish Malhotra party. While Yami chose to go more relaxed with a jumpsuit and carried it with great panache, Kanika opted for a more crisp pantsuit style. Yami clubbed her style with Louis Vuitton handbag and Kanika coupled her classy style with Charlotte Olympia clutch. Which one do you favor? 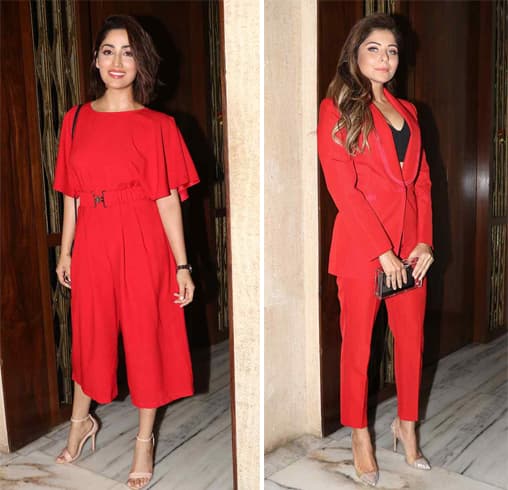 Like Ananya, her co-star of Student of the Year 2, Tara Sutaria went peppy with her style by clubbing her Sunaina Khera slip dress with ‘Be Chic’ clutch. Which one caught your eye? 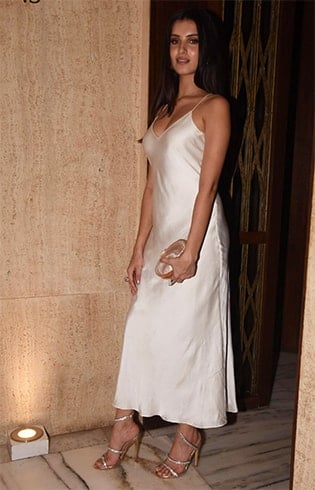 It was the fancy-pants style for Diana Penty at the Manish Malhotra party. She picked an anti-fit Chola crop top and coupled it fashionably with checked pants from Deme by Gabrielle. The black classy clutch, soft straight hair and fuss-free makeup rounded her style. 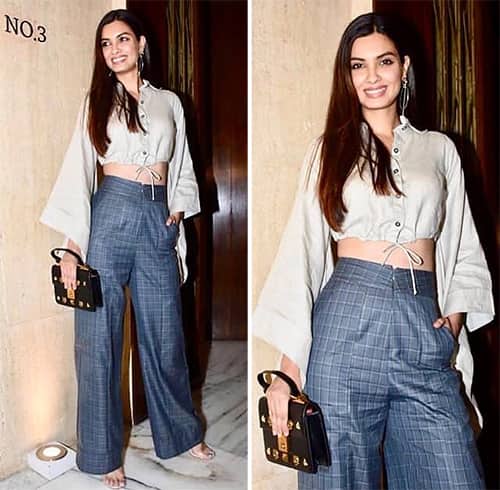 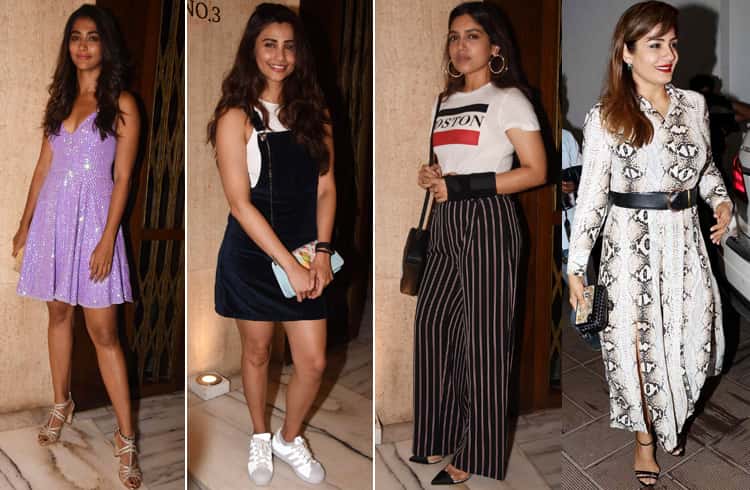 What a great way to end the mid-week blues. A buzz from the Manish Malhotra party will keep all our celebrities super excited and awaiting for the weekend to just begin. Hoping to see more such funfilled parties from our Bollywood stars, to keep us inspired to live through our workaholic weeks.

Janhvi Kapoor is all ready to cast her charm on the cinema world with her debut film Dhadak. For her trailer launch, her sweet friends decided to throw her a party. Manish Malhotra who started his grand career with late Sridevi, threw a close-knit party for Janhvi Kapoor to celebrate her big release at his residence.

Among the B-town darlings that attended the celebration were Natasha Poonawalla, Shilpa Shetty, Janhvi Kapoor, Jacqueline Fernandez besides Manish Malhotra and Karan Johar. Besides the chilling, gossip, humor, and high spirited party vibes that filled us with excitement were the divas showcasing uber cool, fun-filled fashion takes.

Starting with the lady in limelight, Janhvi Kapoor let us dig into the fashion bites of the evening-

It was a polka dots mini dress for Janhvi Kapoor for Manish Malhotra’s party. The full sleeved, mid-thigh dress by Realisation Par gave her a simple and sassy look. White and metallic sneakers by Louis Vuitton rounded her style. While most celebrities spend quality time in doing their hair and makeup, Janhvi chose to keep it simple. With her hair brushed casually and just a red shade for her lips, she was hypnotic.

It’s summer and we wonder why Shilpa chose blazer and denim style. Yet we have no complaints with the diva’s style. Wearing a dark gray Saint Laurent tee over crop frayed denim, she looked cool and nice. Although the light gray blazer with the blue patchwork seemed unnecessary, it went along well with the striking blue ankle strap heels by Saint Laurent. Mid-parted soft hairdo, brown lip color, and makeup rounded her style. Stella McCartney gray sling bag can also be seen sported by the diva.

Summery and sexy was Jacqueline at the Manish Malhotra party in blush-toned CC Double O blazer and shorts. Wearing a casual cool white tee along with it, she oozed refreshing vibes. A blue contrasting mini sling bag by Celine and velvet slides rounded her ensemble.

Also in attendance was Natasha Poonawalla in a multi-colored sequin dress.

Lastly, a big shout out to Janhvi Kapoor for her big trailer launch! All the best Janhvi for your adventurous film career.

Celebrities Are Giving A Makeover To Their Bottoms

Celebrity Hairstyles That Are Inspiring Us This Summer