Apart from the winners, all eyes are set on red carpet as well in award ceremonies to find out who wore what – the best dressed, the worst dressed, the wardrobe malfunctions if any. Fashionlady offers you a quick round up on the red carpet fashion, the winners’ list and not to mention the naughty quotes by the 2-time hostess in a row -Tina Fey and Amy Poehler.

While we will cover that major highlight a bit later, let’s focus on the Red Carpet for the time being.

Unlike Oscar, Golden Globes invites both the television and film world to come together and celebrate the success. As always, even this year’s star studded event was a cakewalk for the Tinseltown’s gala night out. Let’s find out the best dressed of 71st Golden Globes Red Carpet. Do have a look! Believe me, it must have been hard for the critics even to pick a single name for the best dressed at the Golden Globe Awards. Hence, I have rounded up top 6 celebrities, who flattered the audience through their fashion statement and made the red carpet event a success.

Kudos to those six names, first being Uma Thruman who appeared in a mock-neck halter gown by Versace in seducing black. The other five names include Naomi Watts, Emilia Clarke, Mila Kunis, Sarah Paulson and Emma Watson who came as a complete surprise. Uma Thruman in a mock-neck halter gown by Versace paired with Chopard earrings arrives at the 71st annual Golden Globe Awards in Beverly Hills, California. Later on the 43 year old actress was accompanied by Chris Evans to present the award. 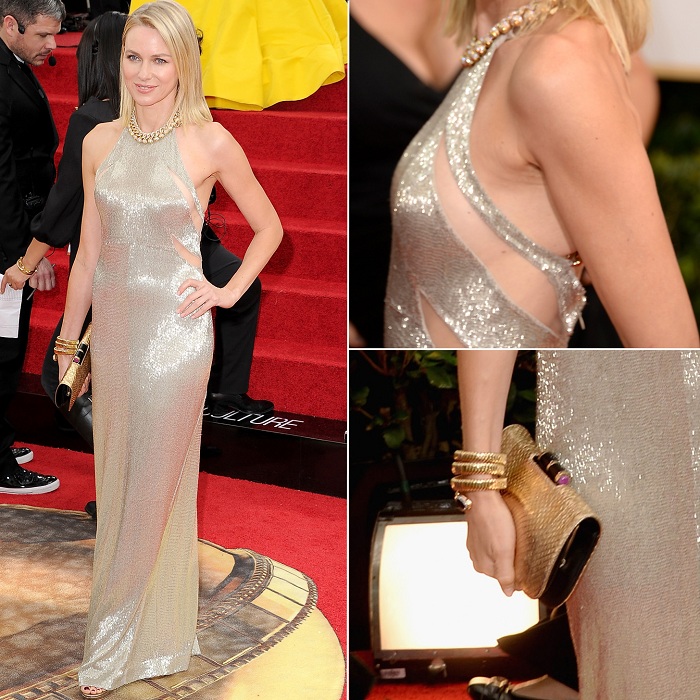 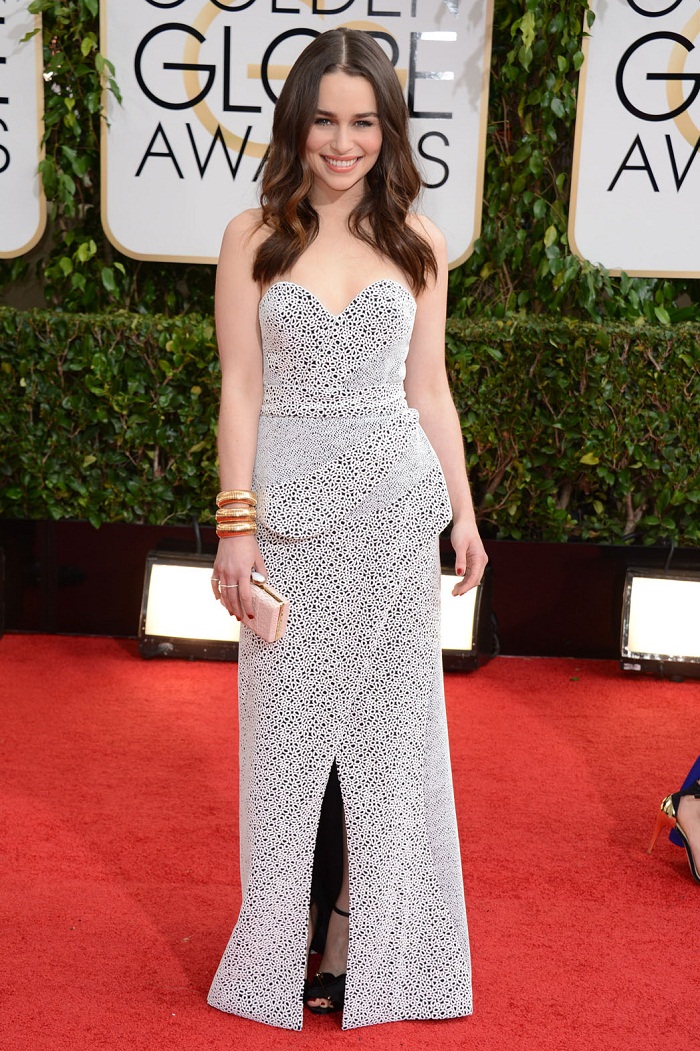 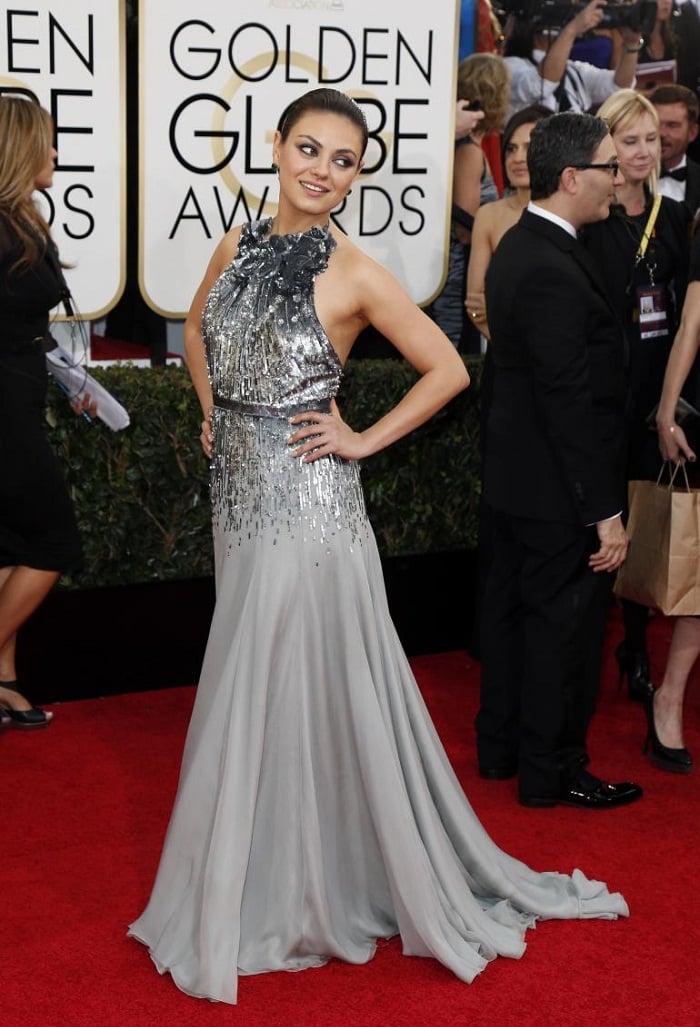 Mila Kunis was a metallic beauty in this star-studded event. She was wearing a Gucci Premiere dress and paired it with shoes and clutch from the same brand. 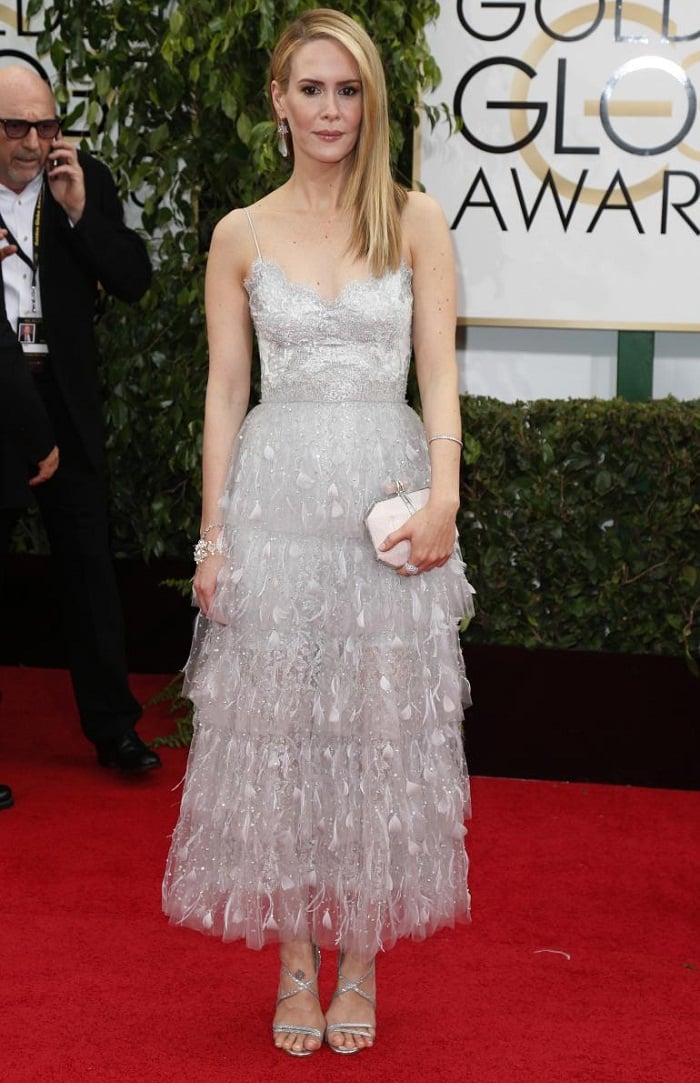 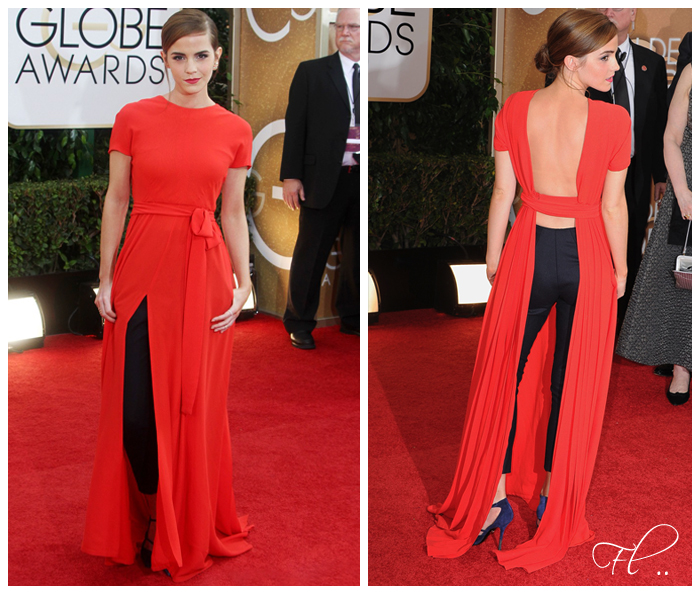 Even though Emma Watson was wearing a Dior Couture dress in mundane design, she turned out to be head turner because of the classic twist given to her dress at the back. She had given a dramatic twist to her dress by wearing black pants underneath the bare back dress. She had accessorized her look with an Edie Parker bag, Dior earrings and Roger Vivier shoes. The risk taken for the red carpet is indeed appreciative.

The passable winners at Red Carpet The Indian fashion was also in flying colors at the Golden Globes, when Zoe Saldana appeared at the event in a Prabal Gurung strapless dress from his Spring 2014 collection. It seems no other actress would have given justice to this dress as Zoe did for her ballet experience.

While every fashionista was eying upon Prabal’s spring ’14 colelction, the red carpet appearance has just fueled the craze for his amazing master-pieces. Saldana had paired her delicate outfit with Christian Louboutin shoes, Bottega Veneta clutch, and Lorraine Schwartz jewels. 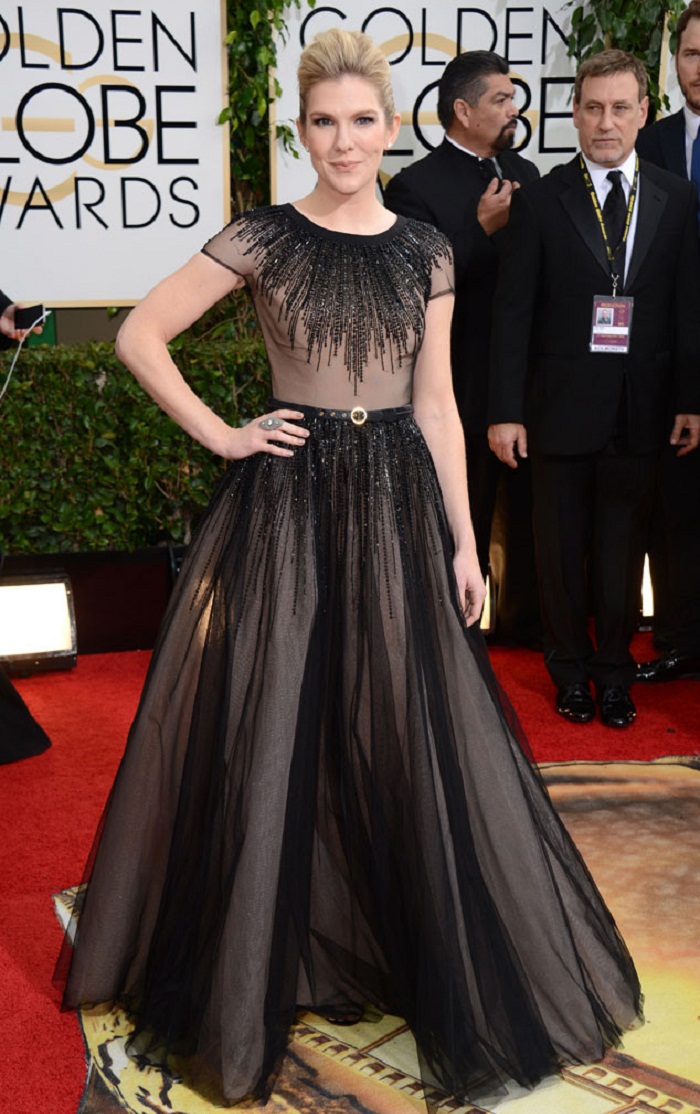 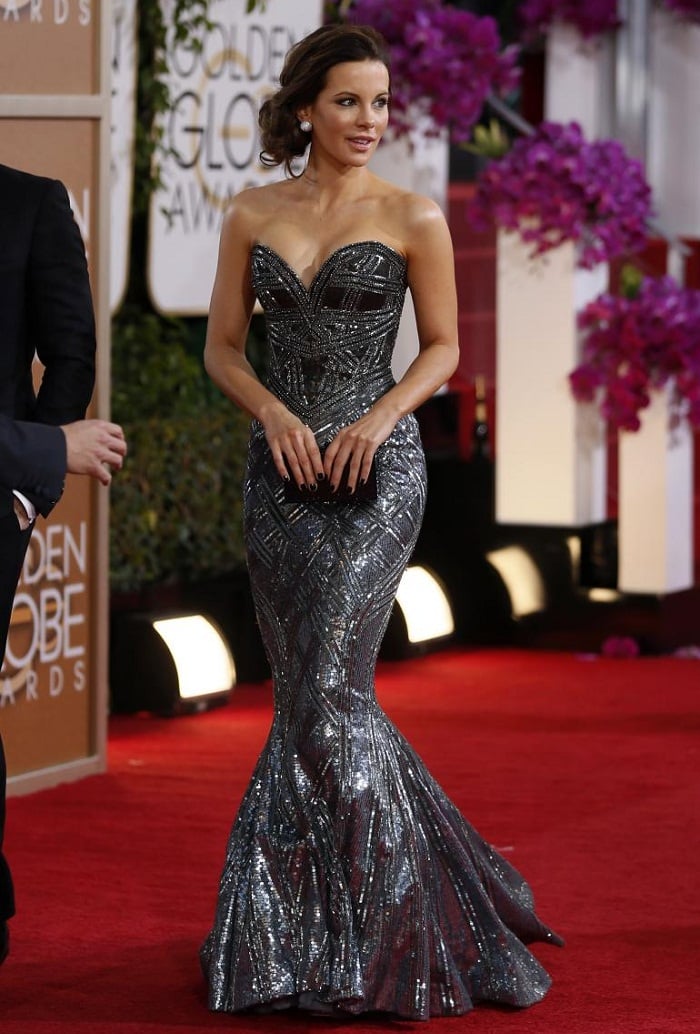 I couldn’t ignore Kate Beckinsale, as she completely dominated the red carpet the moments after she arrived in a seksi silver Zuhair Murad chrome-mermaid gown. The curve-hugging dress was completely accentuated by sequins and looked more gorgeous on her for her perfect tousled hair-do, Jimmy Choo shoes, Edie Parker clutch and Chopard jewels. 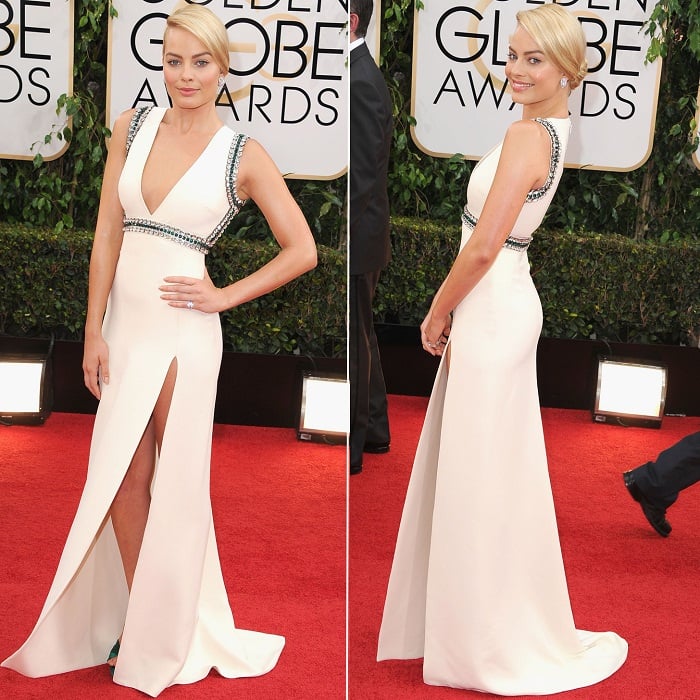 Margot Robbie, The Wolf of Wall Street actress was a head turner in this custom cream Gucci gown with a plunging V-neckline and appealing crystal detailing on her shoulders and slim waistline. She completed her look with Christian Louboutin shoes and Van Cleef jewels.

It seems the Golden Globes was the perfect opportunity to make her red carpet comeback and she TOTALLY nailed it! Zooey Deschanel was from head to toe dazzling in gold, as she donned a sparkly embroidered crop top and asymmetrical skirt designed by Oscar de la Renta. It seems some of the embellishments were transferred to her nude heels from her high-low asymmetrical silhouette. The best mommy award at the red carpet goes to Olivia Wilde. Even though other pregnant ladies of the red carpet, including Drew Barrymore and Kerry Washington, who were glowing in pre-maternal bliss, Olivia came out as a winner for her fearless choice to highlight her giant baby bump in a green sequin Gucci gown.

Now I present you the show stealers – Tina Fey and Amy Poehler.

This awesome duo might have swore in front of media not to be cruel this time as being Golden Globes hosts for the second year in a row, but that didn’t stop them from taking a few digs at Hollywood’s finest. 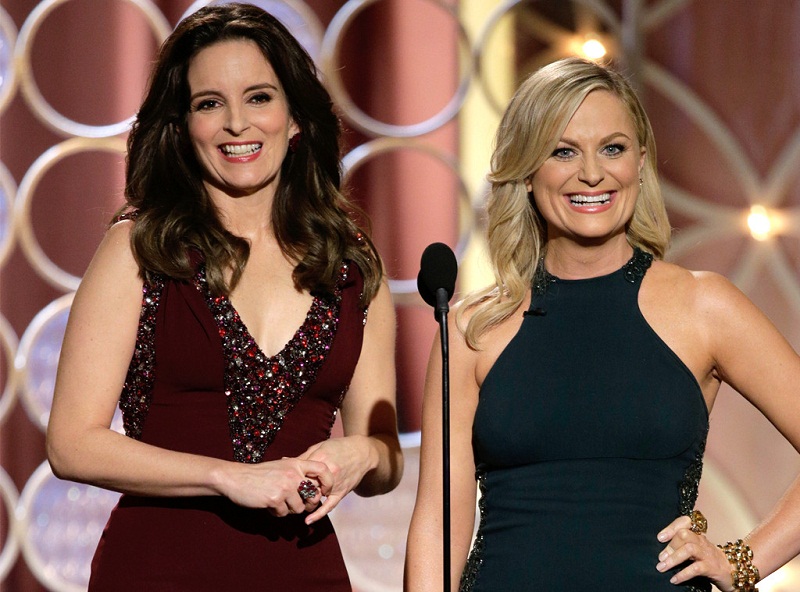 Here some of the best one liners from the event, which made this starry event a memorable one for years to come. Continue reading!

The likes of George Clooney, Woody Allen, Martin Scorsese, Meryl Streep, Matt Damon and Jonah Hill all were at the receiving end at the hands of this comic duo. I have rounded up the best pick up lines below…

“Because it’s Hollywood, and it kind of works, they’ll just keep doing it until everyone hates it.”

“I assume the award is tiniest man with the biggest glasses.”

“It’s the story of how George Clooney would rather float away in space and die than spend any more time with a woman his own age.”

“And now, like a super model’s vagina, let’s all give a warm welcome to Leonardo DiCaprio.” 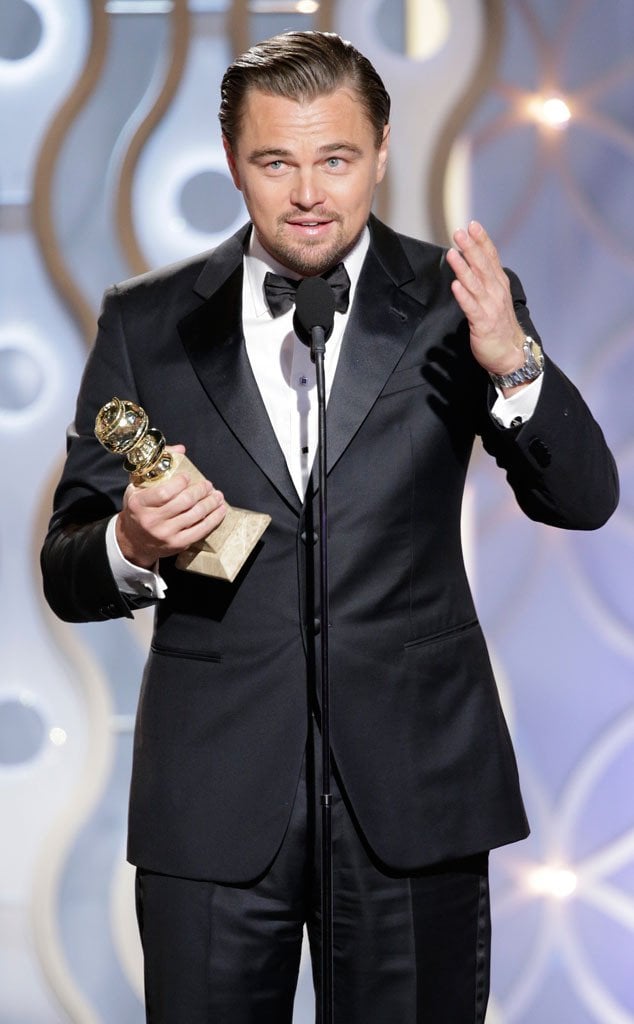 “For his role in Dallas [Buyers Club], he lost 45 pounds — or what actresses call being in a movie.”

“Matt, on any other night, in any other room, you’d be a big deal, but tonight — and don’t take this the wrong way — you’re basically a garbage person.”

“Meryl Streep is so brilliant in Osage: August County, proving that there are still great parts in Hollywood for Meryl Streep over 60.”

“Interesting fact: the original title of that movie was Explosion at the Wig Factory.”

Jared Leto, on body-waxing for his role in the “Dallas Buyers Club”

“I’m just fortunate that it wasn’t a period piece so I didn’t have to do full Brazilian.”

“If it’s Meryl, I could supplement my income by leasing her a shipping container to put it in with the 200,000 other awards she’s received.”

Cate Blanchett on accepting her award for Blue Jasmine

“Thank you for plying me with vodka the way Judy Garland was probably plied with barbiturates.”

Jacqueline Bisset on accepting her award for Dancing on the Edge Best actress in a motion picture, musical or comedy

Best actor in a motion picture, musical or comedy

Best actress in a TV series, musical or comedy

Best actor in a TV series, musical or comedy

Best actress in a miniseries or TV movie

Best actor in a miniseries or TV movie

Best supporting actress in a series, miniseries or TV movie

Best supporting actor in a series, miniseries or TV movie

Hope you enjoyed this post. Do let us know your favorite best dressed star on red carpet.

7 Different Types Of Saree Materials Every Indian Women Should Own