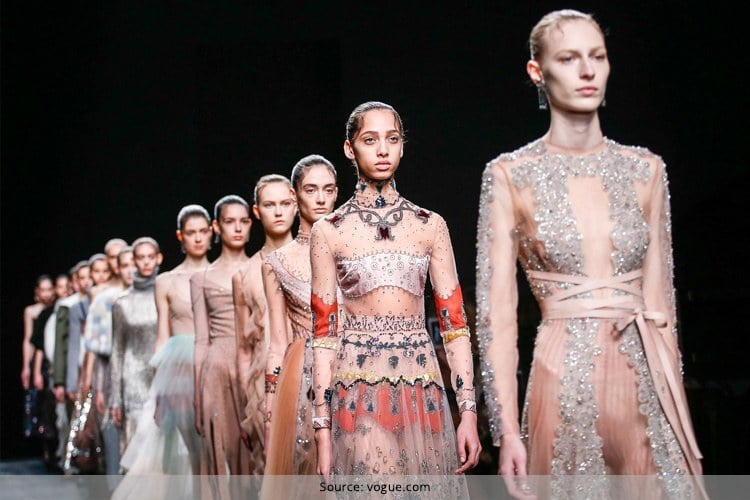 With the red carpet season wrapping up for this year, we are sloshed with fashion talk, gushing over all the amazing ensembles our favorite celebs rocked. But if you have had enough coffee and are already game for some fashion forwards, then tighten up your seat belts. Allow me to take you to Paris Fashion Week and give you a little peak-a-boo into what you can expect your beloved pop star or actress to wear on the red carpets next year.

Check out the top designers who are going to dress our stars for their major evenings.

The designer made a late entry in Paris Fashion Week, but we serve you with those mind-blowing designs just at the beginning. Aren’t we just too generous! The eighth day of the fashion carnival was all about Chanel designs. And if not only for the designs, let’s say, when you have Gigi Hadid and Kendal Jenner walk the ramp for you, you have literally hijacked the show.

Here Are Other Outfits From The Chanel Show

The ace designer had put up a display of spellbinding ballerina-influenced evening gowns which brought the gasps out of an awestruck audience. The entire collection subtly comprised jersey dresses flowing with incredible grace. The fabric used was mainly silk and velvets. The runway displayed a hard-hitting black leather coat, one of the most-memorable maxi dresses of the event.

The final day of the fashion week saw some major drama staged by Louis Vuitton. Breaking out of the cliché that surrounds “red carpet dressing”, LV presented their loyal fans with classic silk scarves in a compelling yet convincing combination with motorcycle jackets, flared dresses and rowdy sweaters and T-shirts with sporty references. The finale was majorly a fashion kaleidoscope set by the label.

The label displayed a plethora of styles which cannot be contained in a themed umbrella. The pieces were still successful in embodying the characteristic spirit of the label. The outfits were finely tailored out of raw materials of different kinds and juxtaposed a myriad patterns.

[Also Read: What To Wear In Paris To Look Like A Localite]

The designer might have intended a wooden maze and brought the reference of ancient Egyptian hieroglyphs. But we cannot take away that the designs he unveiled were nothing vague. The style and the attitude of the outfits and that of the models matched well for each other’s stature.

Supermodels Who Talked The Catwalk Like It’s Their First Language

Kendal Jenner was spotted walking the Givenchy show in a statement look.

And then there was Alessandra Ambrosio submerged in ton of ruffled fabric tailored by Balmain. The brand made sure not to keep the model’s sexy legs undercover.

Another supermodel appointed by Balmain was Karlie Kloss who catwalked covered in the palest shade of pink ruffles and lace.

Naomi Campbell was seen at the Givenchy runway flaunting some serious attitude in a stripped black jacket.

And because our men have also been successful in making inroads into the world of fashion which was dominated by women for so long, here we have actor Ben Stiller in a Valentino creation.

And there is bad girl Riri at the front row. I guess, Rihanna was eyeing her next red carpet look at the Christian Dior show.

Apparently, Emilia Clarke was also shot making her way for the Dior display.

Elena Perminova and Chiara Feragni made it to the first row at Chloe.

Last but not the least, we spotted Kanye West and Kris Jenner flock at the Paris Fashion Week, and our presumption is they were there to support Kendall.

The event was spangled with umph stirring models and all the who’s who of the entertainment world. Some celebs came in to support their friends and families and some came in to brood over their next high profile appearance. All in all a total success and a treat for the fashion enthusiast eye.

A Lavish End To A Stylish Amazon India Fashion Week, ...

Jasmine Tea Benefits That Will Make You Fall In Love

Who is Your Favorite Saree Belle at Dilip Kumar Autobiography Launch

Fashionlady - June 11, 2014 0
As in my previous edition, I discussed about the star-studded event in the honor of Dilip Kumar's Autobiography launch, I am back once again...