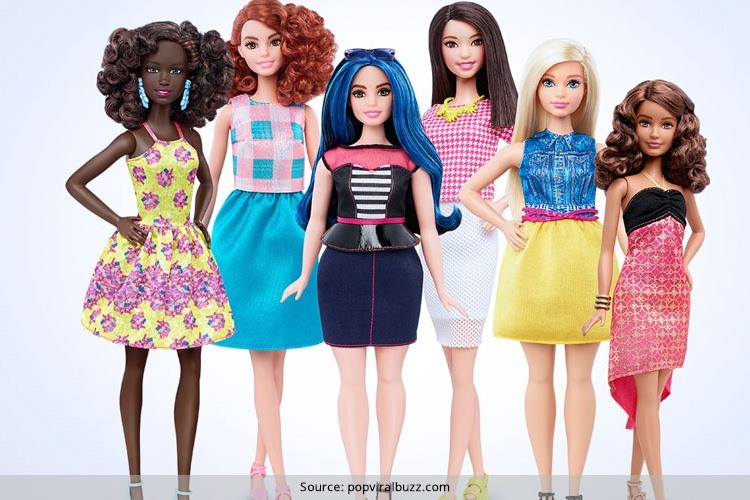 For young girls, having a Barbie has always been a special thing. A doll which is perfect in every sense- slim arms, petite frame and beautiful lustrous hair-she is the stuff made of dreams! All young girls have necessarily grown up with these dolls- wanting to be like her- pretty and slim. Unfortunately, our dreams of being the perfect Barbie girl can’t come true because if the doll’s proportions are converted for a normal human being, she would be unbelievably thin, lanky and with a waist size that could probably kill a normal human being!

[Also Read: Meet Your Human Barbie Dolls, No Playing Them But]

But when Mattel announced a new group of Barbies, everyone was amazed. For years, the company had come under fire that their dolls’ representation of the female body was grossly inaccurate. But this time around, they decided to come up with a range of Barbie dolls which are actually quite like normal girls! Mattel has now introduced three new body types for their little kids. Called the Fashionista range of Barbie dolls, the dolls are now available as curvy, tall, and petite.

Mattel announced that this range of dolls will actually ensure that little girls see new dolls which are reflective of the people around them. The variety in the dolls-their skin and their figure will make sure that they are able to play with dolls which are much more natural looking than any other barbies or for that matter, any other dolls!

When Mattel was asked about why they had dolls which in no way represented the female human body, the spokespersons for the company said that this was never considered when the dolls were first created! They were also tools for playing and never a vehicle of reflecting the girls. But once they started receiving a lot of backlash, the company actually gave some thought over it and they realized that having natural-looking Barbies might be a good idea!

This project of coming up with new body-diverse offerings was given the name Project Dawn, and according to Time — Mattel has been working on it since two years now! The company hopes that with this new range of Barbies, it would become easier to connect with its audience.

So Why Is This Important?

The standards of beauty in our society are really constricted. People and especially little girls have a narrow standard of beauty which is usually what they learn from the society. Most of their learning happens during playtime too and by introducing these Barbies, little girls will be able to see that each and every colour of the skin, of hair type and body type can be celebrated. Being differently coloured does not mean that you are less beautiful. We think this is a very novel initiative and could change the way people think about beauty standards. And if a company like Mattel can reach out to a wider audience, it would lead to a paradigm shift!

When Mattel first came up with the Fashionistas line in 2015, there were only 23 dolls which were available in eight skin tones, 18 eye colors, and 23 hair colors. Another monumental change was that this was also the very first time the company had come up with a Barbie which had flat feet. Now, according to the company’s press release, the 2016 update of the Fashionista line has a total of 33 new dolls, which have all the combinations of the four body types, seven skin tones, 14 face sculpts, 22 eye colors, 30 hair colors, and 24 hair styles available.

Listen Up Ladies! Here’s Why Heels Are Central To Your Outfit!