Indian Fashion Blog
Home Events The Stars Were All Colorful And Funky At The Kids Choice Awards... 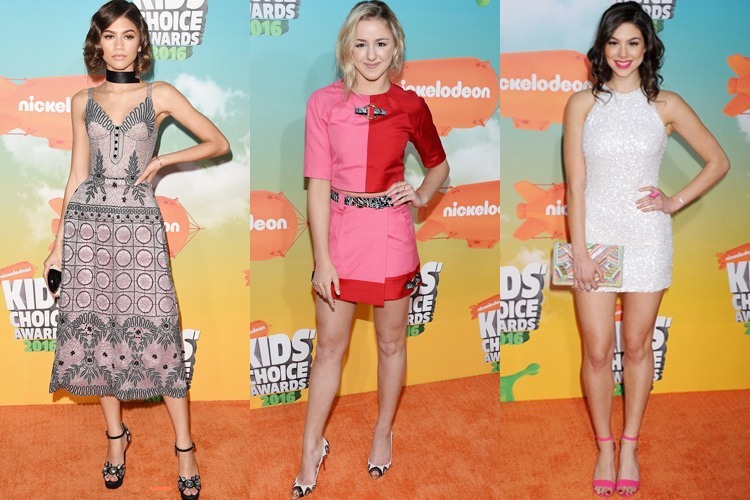 Dressing up for the Kids Choice Awards is a whole lot different from getting dressed for any other award show. The winners of the awards are voted by the viewers of Nickelodeon and it is safe to derive that they are mostly the young audience of the states. Hence, our stars prefer to refrain from excessive skin show and sustain an air of fun and amusement. The KCA was held on March 12th this year and as the plethora of celebs made their way into the venue walking through the orange carpet, we caught a glimpse of them and brought them for you.

The ladies of the pop band were all basking in their own glam and made it back-breaking for us to decide who looked best. Though each girl of the band displayed her distinct sense of style through their choice of wardrobe, somehow they stuck to the shades of bluish pink which brought their looks together. Keeping up with the light heartedness, which is the signature of Kid’s Choice Award dressing, Dove Cameron rolled up at the orange carpet looking stunning in a short printed dress. The Hayley Paige blue and white outfit sat on her like a glove and she matched it with pointed shoes from Bionda Castana. The nude M2M clutch went well too. The sixteen year old was a total super star in the making as she posed at the Kid’s Choice Awards’ orange carpet. Her alter neck black top from BCBG was a perfect match for the high-low Halston skirt in pink and black. Girl knows already she can never go wrong with Christian Louboutin black strappy heels. I swear to God, people, no one ever took the mood of the Kid’s Choice Awards like Laura did it. The Disney star just killed it with her super funky appearance and we are just not over it. The multicolored and abstractly patterned separates from Moschino were literally screaming “Kids Choice”. The bright Alejandra G gladiators resonated with her vibrant theme, and we can say the same for that Farbod Barsum clutch in florescent orange. But her customized “BoomBox” belt takes away the cake. 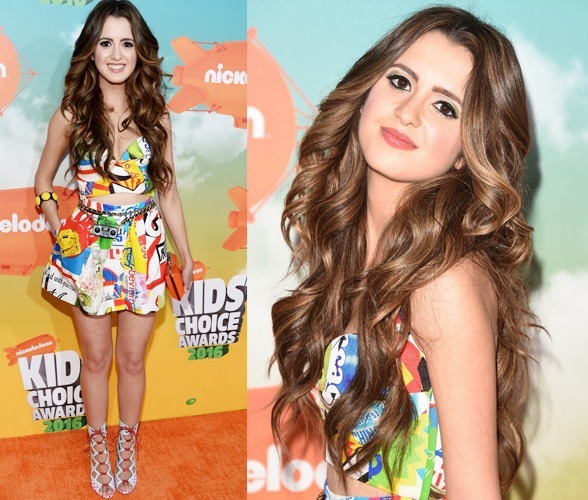 That hair, is morning hair, but not my morning hair. This 14 year old television celebrity turned up at the awards like she rolled straight out of the bed, in every good way. She was very age appropriate in her dual tone matching top and skirt from Harbison Collection. The look was accessorized by a few pieces of Wren & Glory jewelry and few pieces from Peggy Li. And when everyone was going for Christian Louboutin shoes, Chloe played it safe too. Zendaya was giving away some major old Hollywood vibes with her vintage make-up and hair secured in a wavy mid-lob. She wore an embroidered lavender midi dress and bejeweled black heels. To keep the appearance simple she only added a black choker to accessorize. 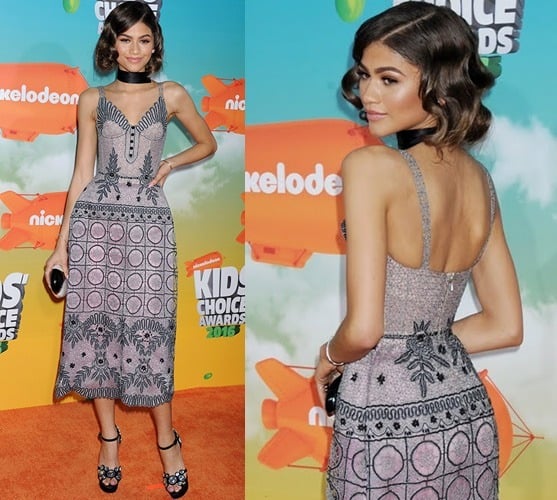 This Nickelodeon star arrived at the orange carpet in a spangled mini dress in white. The halter neck number from Parker was hugged the actress at all the right places but laced the color that entails the mood of the award show. She made up for it by carrying a multicolored BCB Generation clutch and pink Aldo. The jewelry she picked up from Henri Bendel and Charles Albert also substituted for the absence of vibrancy in her attire. Kelli’s dress for the awards had transition written all over it. She was all kinds of sexy in her ultra-short navy dress by Luciana Balderrama with chunky statement sleeves. Her golden clutch from Serapian and Elisabetta Franchi barely-there heels complemented her look seamlessly. 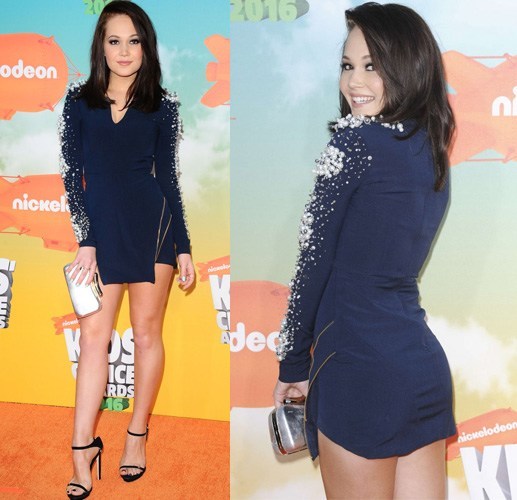 Meghan looked 5 years younger in her super funky combination. Her multi-colored skirts featuring some irregular horizontal stripes. She paired up her right skirt with a contrasting solid blouse in black and wore her nails in some cool pastels shades too. The best component of her attire however were those platform heel shoes. With the Nickelodeon Kids Choice Awards, the trophy season has almost wrapped itself up. But we will continue to bring you the latest from the red carpet whenever we hear of one.

Types Of Makeup Brushes for Beginners

Caffeine Beauty Products For Your Daily Dose Of Beauty!

The Victoria’s Secret Fashion Show 2016 Was One Big Party On...

Fashionlady - December 5, 2016 0
The big night of the year for all the VS fans and loyalists was very recently. If you have not yet caught the glimpses...