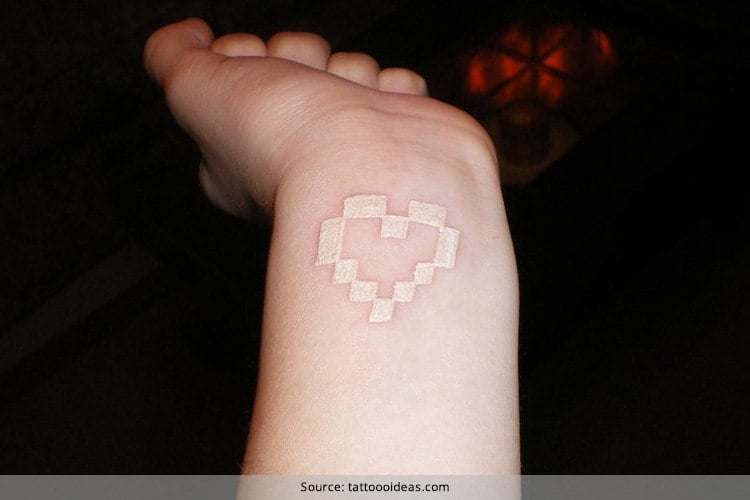 Talk of tattoos and you must have seen the traditional black and white tattoos to coloured versions. They are nice in their own way, but a little prominent, left to themselves. Looking for something subtle, the one that’s right for you, looks minimalistic and not staring in the eye?

White ink tattoo is what you should start eyeing. Why are they not in the attention radar, you might think. That’s because white ink tattoos are a bit difficult to do, which is why they need experienced tattoo artists who are able to work with white ink, or else they might end up looking like a scar.

White ink tattoos have gained popularity with Hollywood celebrities and models such as Rihanna and Lindsay Lohan wearing them on their skin. Considered as a personal statement, white ink tatoo on black skin is a bit difficult to be perceived by the naked eye.

What Is A White Ink Tattoo

Ever thought how the white pigmentation is created? Well, a bit of science it is, since it involves a liquid carrier and a pigment, in which it contains lead carbonate, rutile and titanium dioxide.

The liquid carrier evens out the distribution of the ink when applied since it penetrates the skin. Plus it also serves as a disinfectant to the pigment, so that it can be used safely by the tattoo artist.

Now when you look at the beak white tattoo ink, you will realise the intricacy of the white ink in designing white ink tattoos.

How To Get A White Ink Tattoo

Ordinary tattoos involve stenciling and outlining technique in application. This is not the case with white ink tattoos – whether it is small white tattoos, white ink wrist tattoos, or white ink finger tattoos.

In the case of white ink tattoos, everything is sealed and completed with the white pigment which leaves scar-like image on the body.

Moreover, the white ink which is used for tattoo creation is kind of different from the one used for black and white tattoos, since it’s thicker in texture and made of quality ink (so that it looks striking).

The tattoo artist has two options when it comes to designing a white ink tat. Either he will use a stencil or do it freehand. Using a stencil needs higher level of expertise from the tattoo artist, as involving a novice might prove to be dangerous. Care has to be given to the fact that the stencil should not touch the white ink being applied. If it happens by any chance, it can end up making the ink luminosity dull.

The Pros And Cons Of White Ink Tattoo

The coolest thing about white ink tattoos is that they are visible under UV lights. So if by any chance you go to a disco club wearing white tats, you will be surely noticed.

There are a couple of designs that look good with white pigmentation such as triangle, flowers, fully-shaded stars, crescent moon, and other shapes. You just have to figure out which white ink tattoo would look nice on you, considering other factors such as the tattoo size, the body part where you want the white tattoo, and other ink colors that you would like to mix with the white pigment.

The flip side of it is like so. Dark-skinned ladies or the one with freckles should avoid wearing white ink as it can end up looking bizarre.

Some professionals are of the opinion that the age of the white ink tattoo is not as long as an ordinary tattoo. They tend to get faded easily. Moreover, faded white ink has the possibility to turn into green or yellow owing to its translucent nature. But yes, if your skin is somehow allergic to white ink, make sure to avoid it in the first place.

All said and done, do let us have your likes and views on white ink tattoo. Eager to get it done on your skin – yay or nay?

Top 10 Waterproof Lipstick Colours You Must Own ASAP

All About Hair Rebonding – Process, Side Effects And Precautions

The Abaya Fashion – Everything That You Need To Know

Fashionlady - June 13, 2022 0
Getting inked? Heck yeah!! The first tattoos most people get are the most special to them. However, it’s also the most modified or covered...