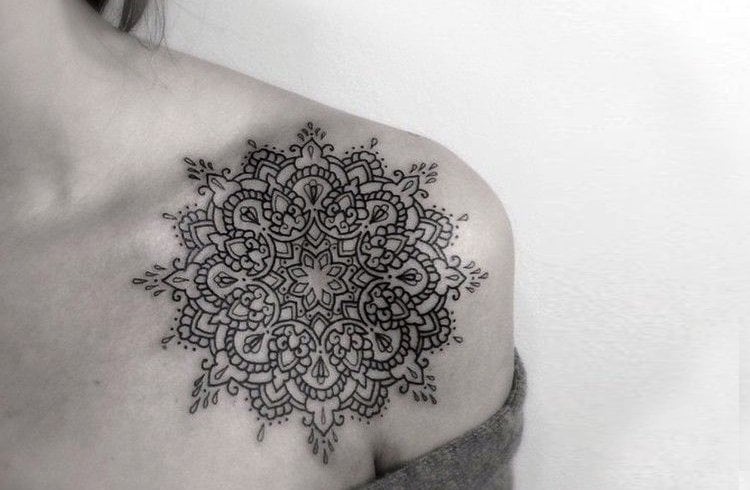 Spirituality is attained not just by reading the religious texts or following the preaching of different religions. They can also be attained by getting Chakra Tattoos inked on the arms and body.

Though there are a lot of other traditional tattoos, more and more people are switching over to the chakra tattoo because of the spiritual uplifting and fulfilment they get.

Mind you, there is not one chakra, but 7 chakra tattoos. The seven chakras have been around for centuries and people use them to heal their mind and body. 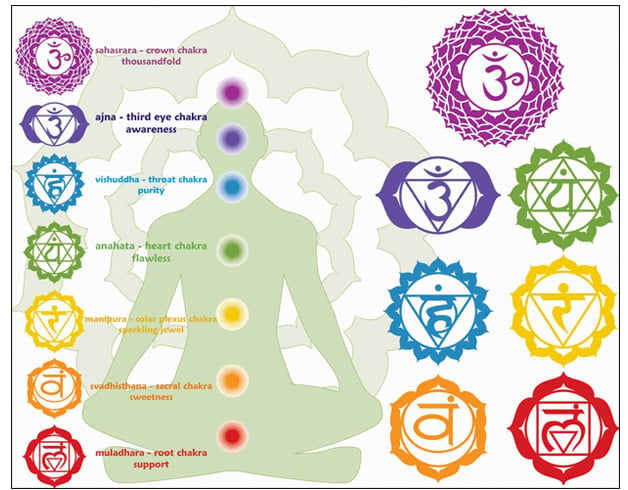 When Did Chakra Symbol Originate?

Yet another evidence of the existence of chakra tattoo in the early period is found in Shandilya Upanishad and Yogashikha Upanishad. 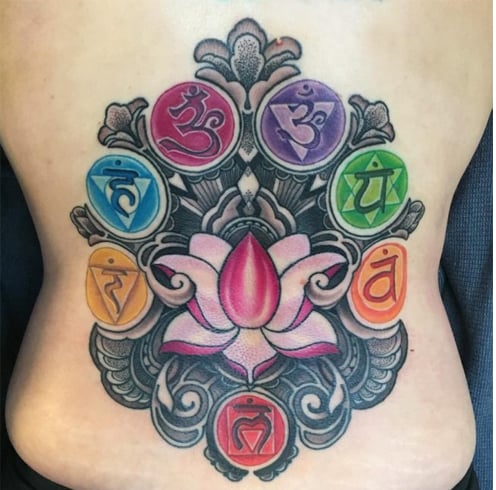 Going by the early historians and chakra scholar, any knowledge on chakras was unwritten. It was much later that some new age authors gave chakras some symbols and published them.

There is another account which shows that the seven chakras originated from East Africa and modern day Tanzania, to be more specific. Some scholars are of the belief that Mount Meru in Tanzania is a sacred mountain that represents the journey of life from bottom to the top. Chakra tattoos have indeed come a long way, so decoding them would be nice and interesting. 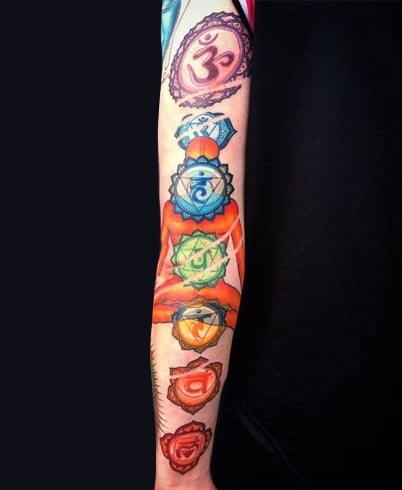 The 7 Symbols Of Chakra

When you see the chakra symbols tattoo, the seven main ones stand out. This helps people to draw them on their body to gain spiritual and physical energy. This tradition has been present since ancient times. 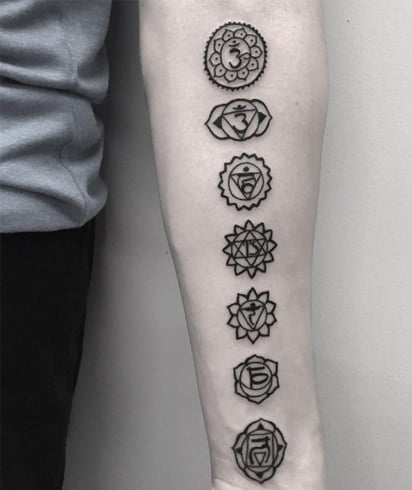 Here are the 7 chakras and an insight into the chakra tattoo meaning:

1. The Root Chakra: It is the most basic chakra at the tailbone. You can call it our energy point for making us feel grounded and to survive spiritually. 2. The Sacral Chakra: This chakra is located in the lower abdomen. Hence, it is naturally understood that it includes our sexual energy. 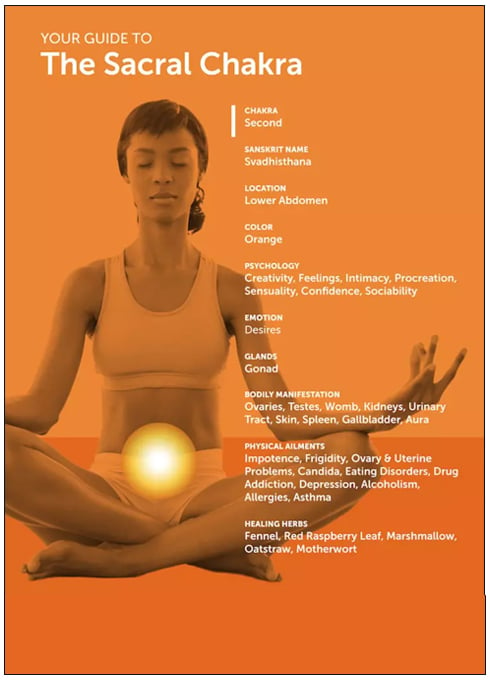 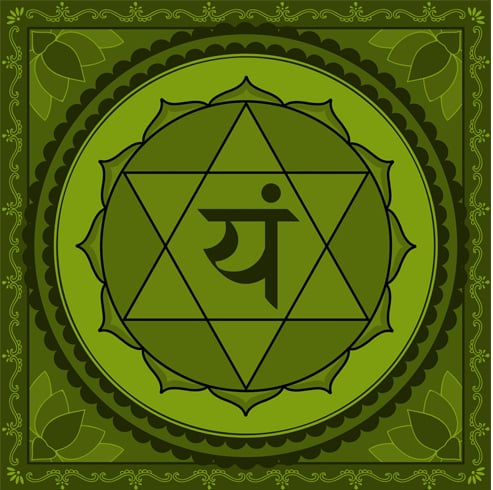 5. The Throat Chakra: As goes the name, this chakra is located in the throat, which is why it is also known as the communication chakra. 6. The Third Eye Chakra: This is our intuition and is located on our forehead – between our eyes. So now you know the emphasis of third eye chakra tattoo. 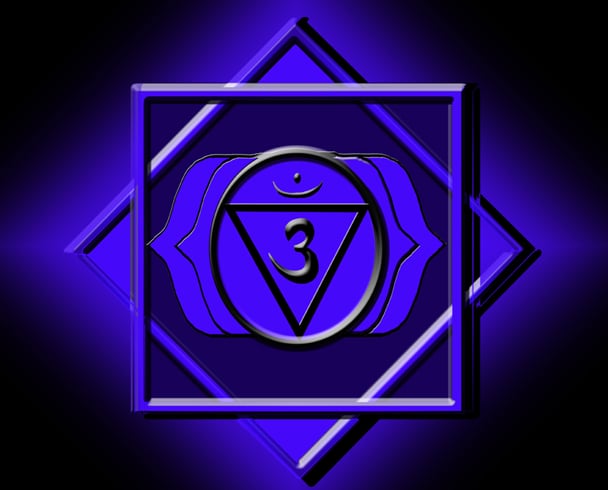 7. The Crown Chakra: Located at the top of the head, this is the place where we can connect to a higher-being spiritually. 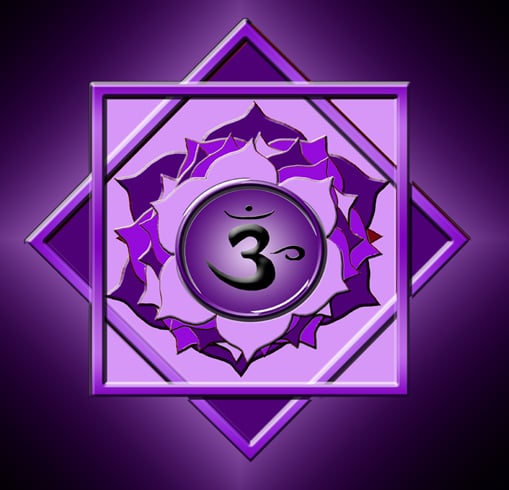 The one difference in the modern day chakra tattoo ideas is that they come with various colors and realistic images, which makes them more attractive than the ancient ones.

What Do Chakra Tattoos Symbolise?

Well, the meaning of the chakra tattoo that you get inked depends on which of the seven you have, as each one of them has a distinct meaning. But yes, you have the choice to have them all, or combine the ones which you want, to bring out the desired meaning.

1. When it comes to the crown chakra tattoo designs, the crown chakra is at the bottom of the seven chakras. It’s a lotus flower having four petals, which conveys strong foundation. So if you have a tattoo with the crown, it symbolises material security, grounding and also gets rid of fears, if any. 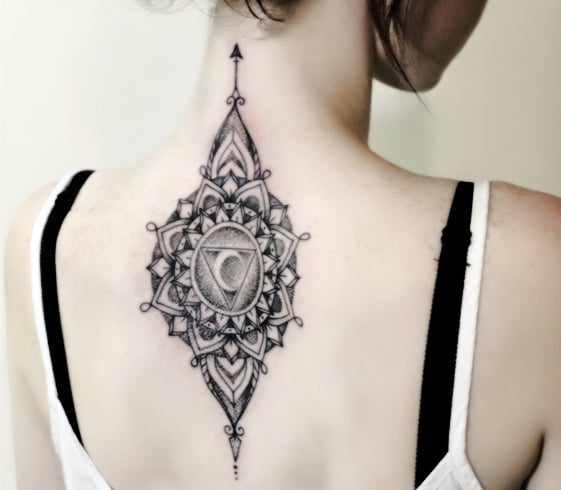 2. The solar plexus chakra tattoo is the third chakra – a yellow lotus flower which comes with ten petals. This type of chakra tattoo is a symbol of sensitivity, personal power and clearing of anger. 3. Take a look at root chakra tattoo. It’s almost like getting to the root of the matter. 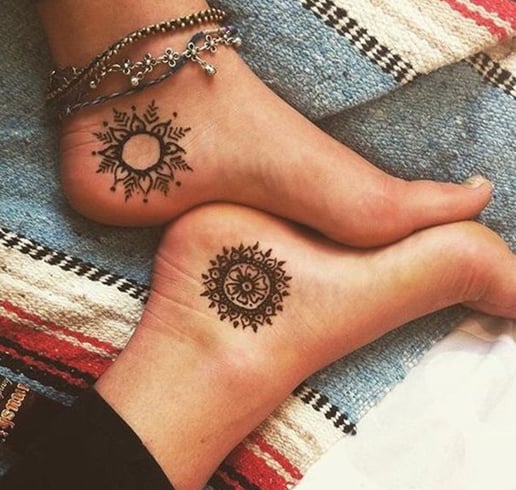 4. The throat chakra tattoo is well-defining in its simplicity and the beautiful energy it exudes. 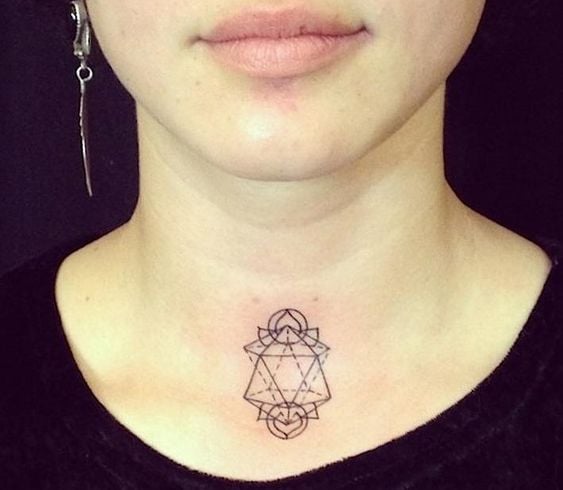 5. Mind-blowing this intuition-inspired chakra tattoo is, what say? 6. Pay an ode to the Indian roots by going for the Ashok chakra tattoo. 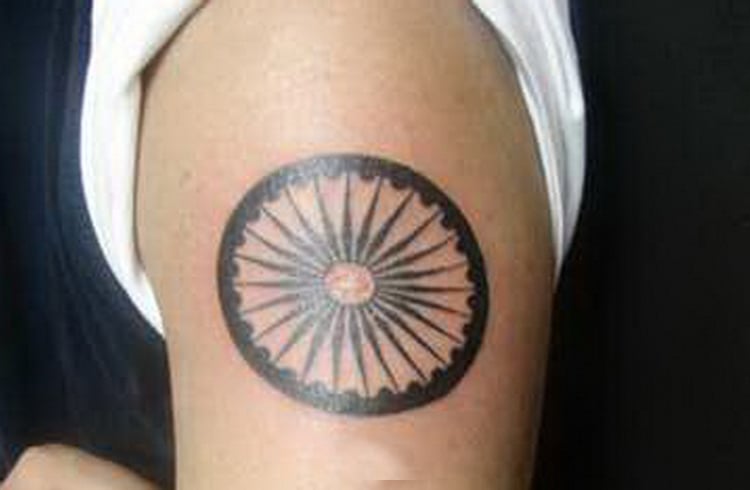 7. The muladhara chakra tattoo is the chakra of acceptance. It is by no chance a small chakra tattoo. Its primary role is to make you feel grounded, stable and secure. 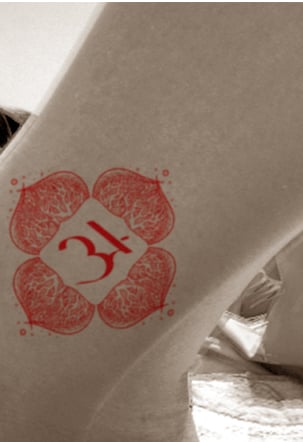 Apart from this, there is chakra back tattoo as well. Am sure by now, you must be on a different planet with chakra tattoo ideas. Was it an eye-opener or an introduction to cosmic beliefs also? Write your comments and tell us.

Best Wedding Foundations For The Bride

All About Lip Piercing

How to Wear Maang Tikka in Different Styles

Fashionlady - May 30, 2015 0
Skin flaunting is the new age tool to looking bold and beautiful. And tattoos can’t be left behind. Wear a noodle strap dress or...