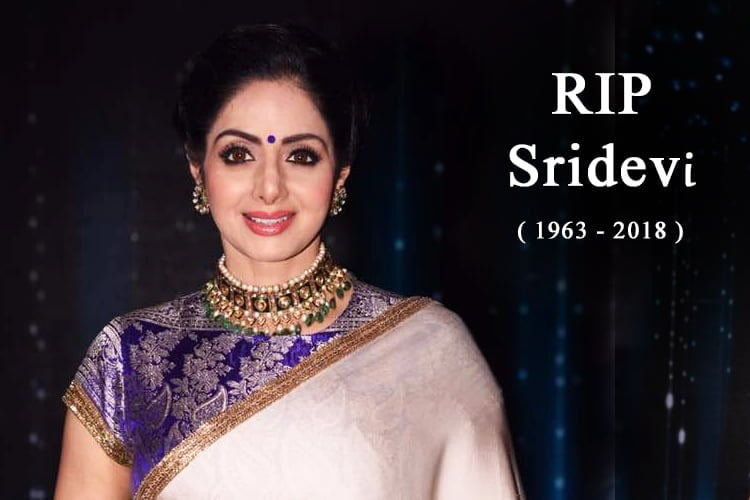 She was born to act. Natural acting is her genre, somewhat rare these days. She left millions of viewers crying into sheets of paper with her brilliant and meaty performances ever since she started acting. She made us giggle like a child with her comedy roles. Her dancing eyes and feet didn’t need any training from the fleet of accomplished choreographers. Such was her unmistakable foot-tapping. She started her career at the age of 4 in the 1967 Tamil film Thunaivan when it is time to play with the Barbie dolls. Only she knew when to make that stupid grin, or give that mesmerising loving look. She embraced marriage and motherhood when she was at the top of her game. She has delivered some knockout performances year after year, from her childhood days till this very minute as you read this piece. She put up such an entertaining show in such a short span of time that it is hard to believe Shree Amma Yanger Ayappan known as Sridevi is no more with us.

All of 54, Sridevi left us to tears with her shocking passing away from a cardiac arrest in Dubai on February 24, 2018. She had gone to attend a family wedding, but fate played it all wrong. Is she the Indian version of Audrey Hepburn or Meryl Streep? You decide. But the #Sadma we as movie fans got is hard to forget and overcome too. Her ‘Mere Haathon Mein Nau Nau Choodiyan’ to ‘Kaate Nahi Katate Ye Din Ye Raat’, ‘Morni Baaga Ma Bole Aadhi Raat Ma’ to ‘Chandni O Mein Chandni’ and iconic songs will keep resonating in our ears for many more years to come. That was the sweet charm of Sridevi movies.

Take a look at Sridevi last video before she breathed her last.

Cameron Bailey, Artistic Director, Toronto International Film Festival, tweeted, “Shocked to hear of the passing of India’s legendary Sridevi. Honoured to have been in her presence in 2012 when she visited Toronto for English Vinglish. She made countless millions fall in love with her characters “

Versatility thy name is Sridevi!

She virtually ruled the acting horizon in the 1980s and early 1990s.

Don’t know how many of you will agree with me – but Sridevi can very much be taken as the female version of the famous, charming and seasoned Hindi film stars like Amitabh Bachchan, Dilip Kumar, Raj Kapoor, Dev Anand, Rajesh Khanna and many more. So well-deserved was her recognition that Sridevi was called India’s first female superstar. YES!

Now don’t be under the impression that Sridevi acted only in Hindi films. She was equally a part of Tamil, Telugu, Malayalam and Kannada films. In fact, she has acted in over 300 films and has won 5 Best Actress awards from Filmfare.

This is what Rajinikanth had to say on Sridevi death news “I’m shocked and very disturbed. I’ve lost a dear friend and the industry has lost a true legend. My heart goes out to her family and friends. I feel the pain with them, RIP Sridevi …you will be missed.”

Sridevi was Chaalbaaz, Chandni, Mom in every way. In her big rolling of eyes, pulling of faces which conveyed the adventure of a little girl in Sadma to the gorgeous looking Chandni whose stunning curves and beauty is hard to forget. Where is the Queen Bee? Where is her poise and sophistication? Where is that pure electricity who lit up the screen? Her fans never got enough of her, and now they can’t.

All I can say is our heart-felt condolences are with her family. Do write back and tell us how you found this Remembrance on Sridevi. It will take some time for her lovers, family, and co-stars to face this huge celluloid setback. The best way to overcome it is to hum the songs she sang in the movies that made her rare, and beautiful! Like this below.

Baba Siddique’s Iftar Party Spread All Glitter And Glamor During The...

32 Amazing Home Remedies To Get Rid Of Boils

Best Sephora Products Every Makeup Lover Should Have!