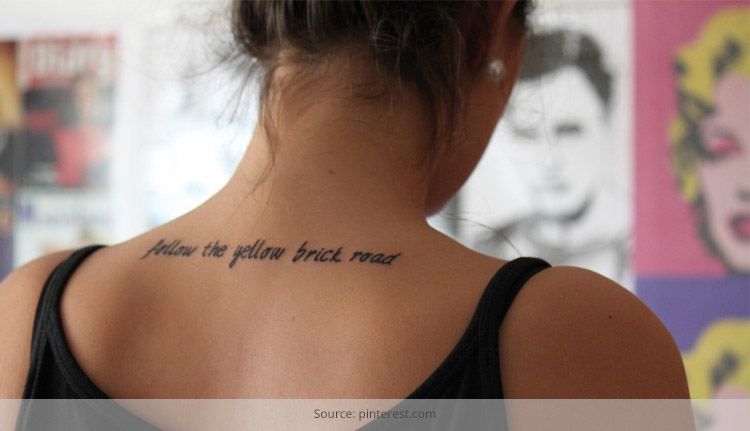 Getting a tattoo doesn’t just mean that you have an indelible mark of your awesome personality on your body, it also means that people are constantly judging you for it.

In India, people with tattoos are often judged as less reliable and half-hearted for work. While the army have already banned the candidates with tattoo from their recruitment, the girls are now facing huge problems as their inked bodies are hugely affecting their marriage prospects.

Even in corporate world, people with tattoos are judged as unreliable and unprofessional. Especially when you are in HR department, you just can’t afford to ink your body. The bottom line is just think twice or even thrice before sporting a tattoo on your body.

Getting tattoo may be one of the coolest things you can do with your body, but be prepared for two things for the rest of your life: people are going to ask you how much did it hurt and their constant judgment about you in their minds.

Although your tattoo may only be a form of self-expression for you, for lot of people your body getting inked means – ‘I’m an opinionated rebel who will argue with authority figures for fun’. While your elaborate tattoo may seem cool to you, it may backfire many a times.

So, why do people get inked?

There are basically four common reasons for this –

People here will judge you as unreliable and unprofessional who is not serious towards her work.

In a recent survey made by the Center for Professional Excellence at York College of Pennsylvania, USA around 61% of HR managers said that tattoo can mar a candidate’s recruiting chances. And this is also evident in India.

Here’s an excerpt from Times of India on this –

Aashima Choudhary, who works as a corporate trainer, has an elaborate tattoo below her elbow, which she got done for her husband and daughter. She says, “Whenever I go for interviews or meet any corporate bigwigs, I make sure I wear three-fourth sleeves. Those people feel that as a corporate trainer, I need to set an example, and for them tattoos are way too funky and rebellious to fit in a corporate environment. I was once asked in an interview about my tattoo, so I said it’s for my husband and daughter. That gentleman asked me if there’s no other way for me to show my attachment, and he didn’t look very convinced when I said that this is my way.

But again there is always a good side of it. Once you establish a healthy working relationship with your colleagues, the ink then becomes the most amusing aspect of your personality with everyone asking you –  the what, how and why of it.

When it comes to match making and proposals, people will judge you as opinionated and rebellious.

In India, as soon as a girl touches 22/23, whatever she does it’s going to affect or marriage prospects and of course a tattoo is no exception. Mothers always threaten with dire consequences only by the mention of the word tattoo by their daughters. The reason is simple – nobody is going to marry a girl who is that forward.

These daughters are only given an option of getting their body inked only after their marriage with their husbands’ consent. And if they go for a tattoo before marriage, it may seriously bring in wrong impression.

Potential mother-in-law might get scandalized at the thought of such a modern bahu, potential husband might get put off by the sight of the tattoo – she has her reasons in place.

This is the reason, most of the girls get their bodies inked at places which are not visible.

Most people in this conservative society will judge you as loose, easy and open-minded. Boys think that girls with tattoos may easily sleep with them on their first date and these girls easily get tagged as ‘characterless’ by the society.  Guys think that girls with tattoos are kind of some hippy chicks who’re open-minded and won’t mind having some fun.

Neither me nor my Fashionlady team couldn’t figure this out, but this certainly holds true in India.

Anyways, I had to wait for 10 long years to get my body inked only after my marriage. Well, how could I be an exception, as I also live in the same country.

Fashionlady got in touch with some tattoo artist to find out why tattoos have such a high risk factor involved and send a a warning signal to some people’s brains.

Danny from Hakim Aalim says that no matter how westernize we become, there’s still a part of our society where tattoos are considered as a mark of rebellion. It’s just a wrong mindset. People who have never gone for tattoos can easily become judgmental, but they can never understand the passion behind it. People who consider those with tattoos as rebellious or loose, they certainly have a warped thinking.

To summarize, we should not get carried away with western culture having completely covered our arms and neck provocative designs. Instead, we should atleast think twice or thrice before sporting our new tattoo considering our job, age etc. as tats should be always be fun and not just a slur to bug you rest of your life…

How To Remove A Permanent Tattoo