We have already talked about the evolution of Indian bridal fashion in length and wedding collections by Ashima Singh and Tarun Tahiliani in our part 1.

In this edition, we are going to talk about 3 other fashion giants, whose designs have also added feathers to the marvelous of Indian wedding attires. Do have  a read! 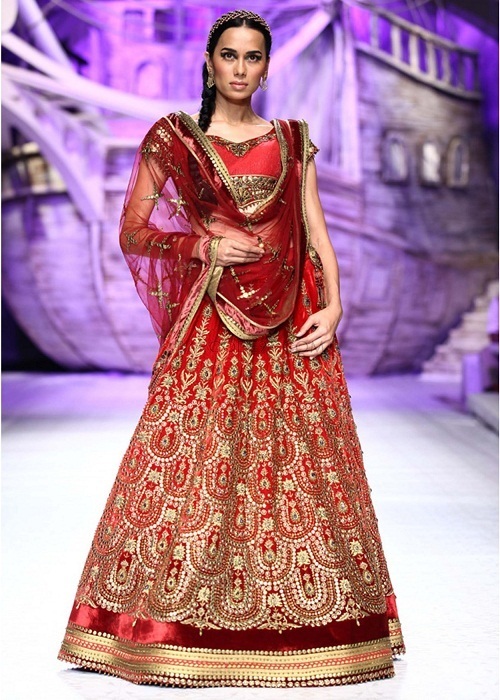 As per ace designer JJ Valaya, today’s Indian bride is well-informed, trendy, traveled and super-fit. She is far more sexier than she used to be 1-2 decades ago. She is constantly looking for a change while still retaining Indian roots.

Today, women are ready to experiment with various looks. Of late, there has been one influx of Indian avatar in western gown. Another trending fashion is the two-stole concept. 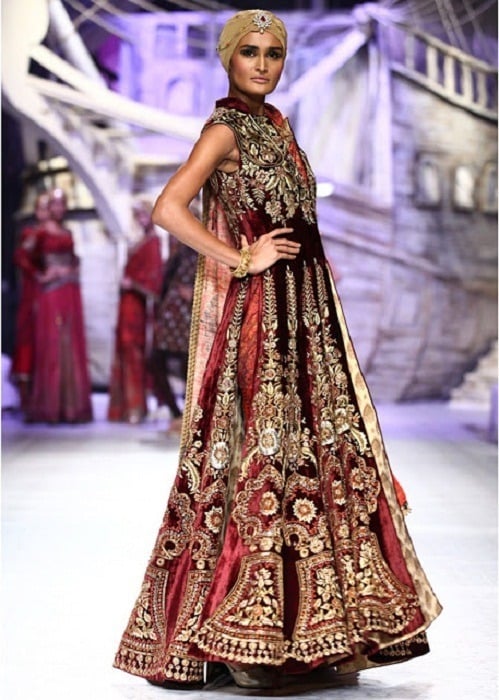 An ideal bride is someone who is well-traveled and also appreciates her own roots. Valaya would prefer to dress such women as royal bride in red-colored Banarasi fabric with a lot of rich velvet detailing such as dabka with mokaish, real pearls. Semi precious stones such as onyx and opals.

However, he prefers to flaunt the feminine beauty in a sensual manner, since his blouses are always sexy with almost non-existent back, while the neckline not being too deep. 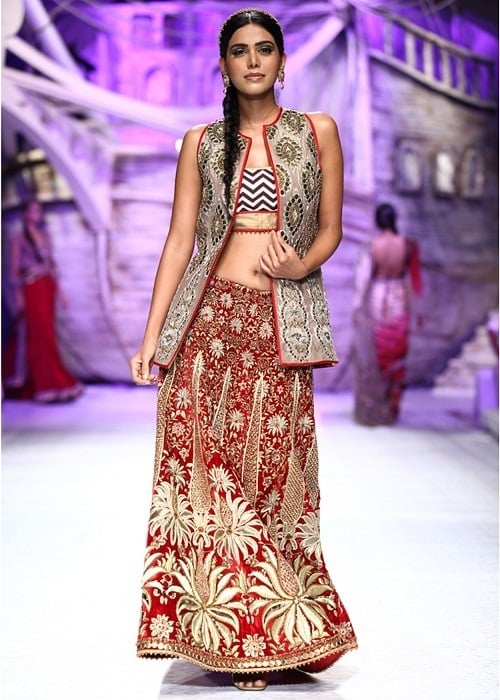 He prefers to  stick to the midriff showing concept, as showing off lot of skin is always contrast to all heavy work involved in the making of the Indian wedding attire.

Valaya likes to go for two dupattas for his bridal number; the heavier one will be the piece of art and the lighter one would be for the head. His heavy designs will go easy on jewelry, make-up and hair style. 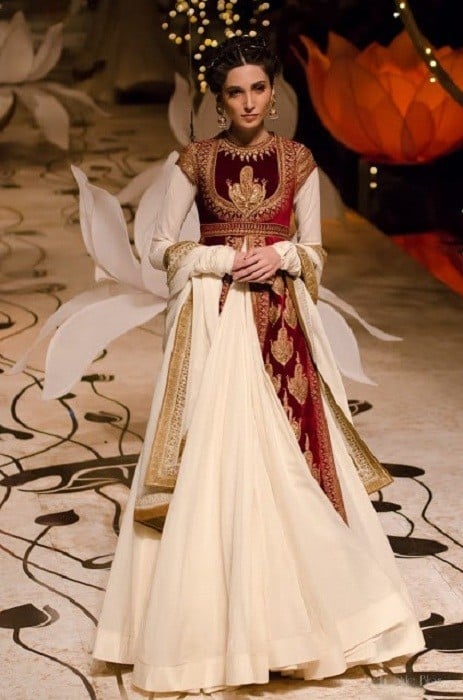 Rohit insists that his bride should have traditional look and look like as if coming out straight from an Indian painting. He is happy that today’s brides are well aware of Indian sensibilities and have the knack to maintain balance between conventional and contemporary styles. They are eager to experiment with bold colors and look forward to fabric which are traditional though lighter. 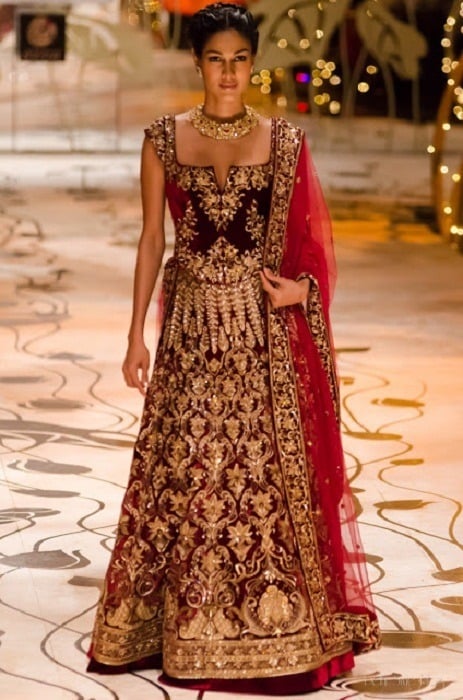 His creations normally involve handcrafted and non-blingy look. Unlike other designers, he thinks that the blinge factor should come from the jewelry and embroidery such as zardozi or dabka rather than encrusted crystals 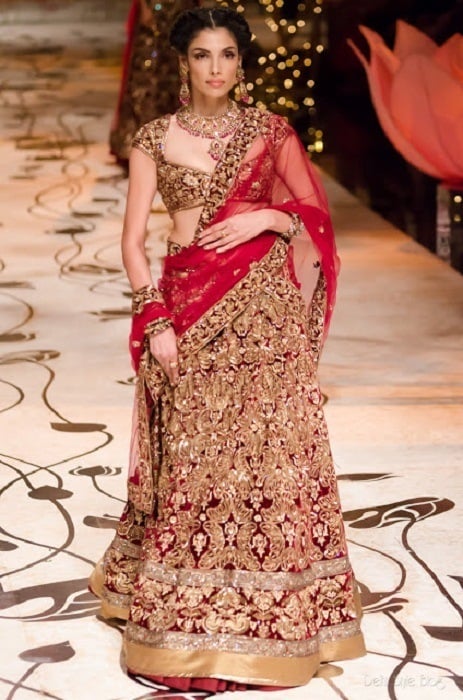 Rohit Bal’s lehengas usually comprise of old brocades, some kind of tanchoi/velvet in vermillion red, traditional badla, different dabka designs and intricate resham work. His blouses are always sexy, which he likes to refer them as Kamasutra-inspired sexy choli. The sleeves are usually cut short and the look is completed with low bun with central parting, jhoomar and matha patti or maang tikka and not to mention with nath. He believes in creating a voluptuous and sensual look for his bride.

The story of see-through veil Like we have already said that today’s brides are more than willing to experiment with colors which are usually not considered as wedding colors. Plus, they are also curious to try on different silhouettes. Suneet’s NRI clients prefer gold and nude palettes, while he prefers to dress up his bride in red and gold.

His ideal creation is a number with 30-kali crafted out of tanchoi and zardozi thread work along-with crystals which render a glamorous look. He does not believe in the cleavage show, so his neckline goes with the necklace. However, he likes to expose some skin at the naval region though. 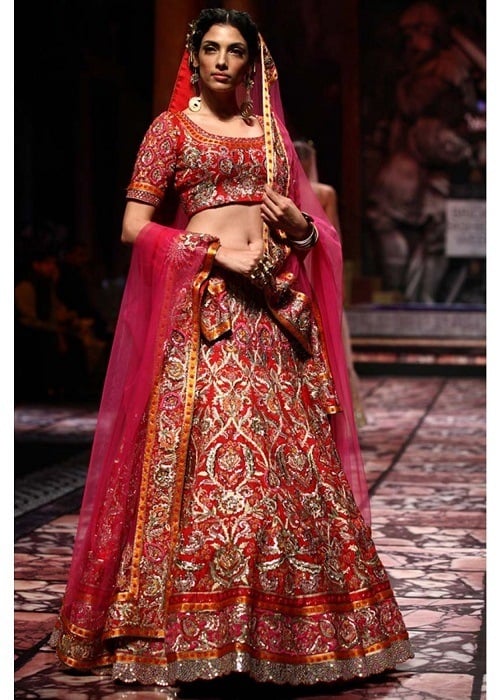 In a wedding lehenga, he loves the veil-effect mostly, the see-through effect of naked back and the head accessories through the veil rather than visible directly. Suneet doesn’t like blouses. He rather opts for a beautiful corset with short sleeves and a very low back, intricate with zardozi thread work and Swarovski crystals. Like JJ Valaya, he also prefers to add two dupattas; one for the shoulder and other, the lighter one for the head. 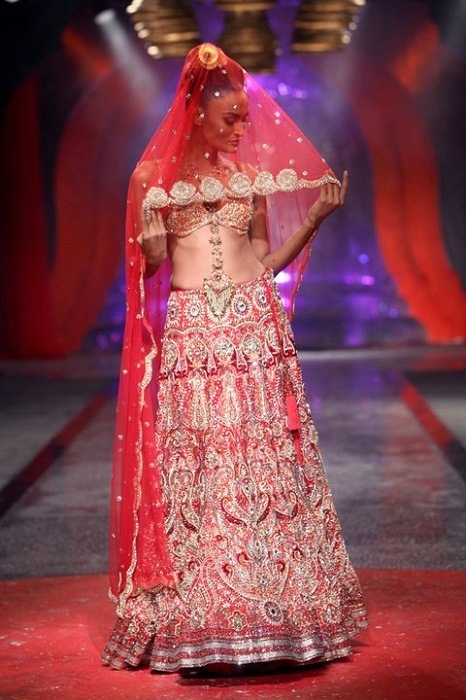 To complete his look, a matha tikka is a must which is pulled back to the jooda, which will again have some fewer embellishments. Finally, a diamond necklace or kundan-encrusted piece with emeralds and rubies would complete the look with elegant make-up.

Styling a Pencil Skirt Isn’t as Difficult as You Have Been...

Gold Earrings: A Versatile Pair For You!