Ask any Bengali lady and she will vet one thing for sure. That a Bengali wedding is not just tying a knot but a festival! And the following things are a must in a Bong wedding – Traditional attire and gold jewellery. 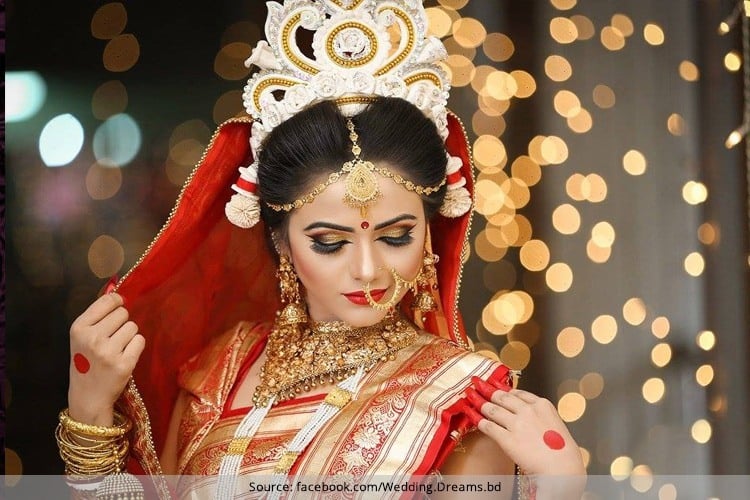 In fact, it is the gold that forms the backbone of Bengali bridal jewellery. Some of the ornaments are inherited from the mother and grandmother. Now you can well imagine the deep-rooted culture of traditional Bengali jewellery. Even the goldsmiths and diamond merchants based in Kolkata have come a long way keeping their legacy alive.

For all the non-Bengali girls out there, it’s time to know more about the traditional Bengali jewellery names. Who knows you might end up shopping for this unique and gifted Bengali culture in jewellery making.

LET’S LOOK AT SOME JEWELLERY INCLUDING Bengali BRIDAL JEWELLERY

The Nose ring is an integral part of the Bengali culture and Bengali wedding jewellery. The ‘Nath’ is worn by the bride after her nose is pierced. It is said that bigger the ‘Nath’, higher is the status of the bride. Maybe it’s one reason why the ladies of well-known Bengali households wear big sized nose ring on the festival occasions.

In Bengali parlance, ‘paati haar’ is the necklace worn in Durga Puja and weddings. The affluent Bengali families wear this ethnic wear as bridal jewellery. Though the designs of ‘paati haar’ are intricate and complicated, they have been made convenient to wear by making it flatter and broader in shape. This reduces discomfort in sporting this Bengali bridal jewellery.

The Traditional Bengali jewellery names for Chandelier earrings are ‘Jhumka’ or ‘Jhumko’. It’s all about floral designs. New designs have been inculcated in the ‘Jhumko’ so that they can be worn at ease by Bengali women in the modern day context.

This form of Bengali wedding jewellery is used in the middle parting of the bride’s hair. An exemplary piece of jewellery, this forehead ornament worn by Bengali bride is studded with precious stone or gold.

This is yet another form of magnificence in Bengali bridal jewellery which is used to hold the veils of a Bong bride. Some are of the belief that the ‘tiara’ or ‘maang tikka’ was inspired by the British when they were ruling the country. The tairaa adds an element of elegance to the new bride and helps tremendously in tying up the veil.

This is the ‘choker’ that is closely fitted around the neck of the bride. The ‘chik’ usually sits pretty on the neck of the bride and is not supposed to reach the collar bone. Gold chokers are a part of bridal jewellery. Sometimes, they come studded with diamonds or pearls to give an add-on effect.

Chandelier earrings set in gold is a hallmark of traditional Bengali jewellery. A ‘Kaan Baala’ for the ears is designed in such a way that it takes the shape of an ear. While a ‘Kaan Baala’ is meant for the ear, ‘Baala’ is dedicated to the hands (wrists to be precise) in the form of bangles.

Bengali gold bracelets have their own charm. In Bengal, the traditional bracelets in gold are called ‘chur’. They stand out for the intricate designs carved on them. Although, they come in pairs, depending on your need and budget, you can even buy one ‘chur’. As for the gold used in making a ‘chur’ bangle, the quantity can go upto a whopping 50 gms!

Apart from the above, pendants, brooches, armlets and hair pins are more examples of the unique craftsmanship of Bengal.

Now you know why Bengal has more to offer this festive season apart from Tussar and Jamdani. Hope the Traditional Bengali jewellery names must be a delight to learn as much as to wear.

Get Your Brow Game On Point: 5 Best Eyebrow Shaper Machines

Fashionlady - November 15, 2016 0
Love the hippie cult? The one that gives you a colorful, earthy and easy-going feel? Then you are in the right planet of boho...