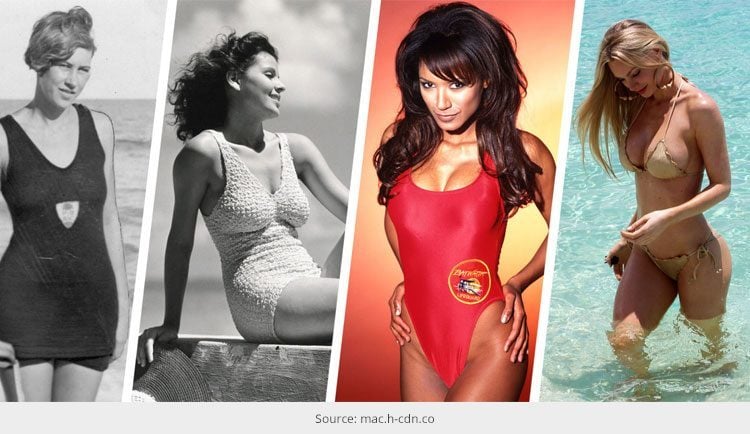 Bathing in the sea has always been a delight for the fun loving. And the excitement almost doubles up when one gets to wear super sexy swimsuits. Interestingly, how many of us are aware of the year of birth of a swimsuit and how it evolved over the years. Puzzled? Don’t worry as we take you through the history of women’s swimwear.

This is the time when swimming had started to become somewhat recreational. It was alright for ladies to brave the waves but that they could do wearing long dresses for the sake of modesty. Since the basic idea was to protect the bathing garments from floating up with the breeze, ladies had to sew weights into the hem of their bathing gown in order to prevent the flying gown exposing their legs.

It was in the 1850s that bloomers were added to the bathing suit. This was done as a matter of precaution so as to avoid any leg exposure by accident. It was towards the end of the century that the princess style evolved. What made it look like one? Well, it was a combination of one-piece fitted blouse and bloomer-like trousers.

This was an era that saw swimwear assume fashionable proportions. The full gown for women had paved way for an outfit that covered neck to the knees. An important point to note is that the length of the swimming costumes started decreasing. Jantzen, a swimsuit brand that gained popularity owing to its “Red Diving Girl” logo symbolised feminism through waters.

Ah…this was the momentous era when a woman’s limbs could be finally seen. It’s as if they were liberated from the confines. The female body could finally breathe and the era of wearing a short swimsuit finally arrived. This gradually led to the evolution of Lastex, a woven satin that suited the beachwear.

This was the moment in time when in the year 1946, designer Louis Reard designed the word’s first bikini. The awesome part about it is that the bikini was modelled by a dancer. Why so? Because the original model had refused to wear it. If you want a dose of laughter, an engineer went and hailed the bikini as “smaller than the world’s smallest swimsuit,” and went and named it after nuclear tests at Bikini Atoll.

Someday it had to happen. The swimwear started to get developed for curvaceous women. This meant making designs that concentrated on shape and support. It was towards the end of the decade that bikinis started seeing acceptance.

Garments, particularly feminine ones, have always been in the innovation. The designer Rudi Gernreich in the year 1964 introduced the topless “Monokini,” which was a fashion rage at that time. The bikini had two micro halter straps that was condemned by the Vatican and pronounced illegal on most public beaches in the world. But that was not to be. A couple of modest styles of the cut-out swimsuit were unveiled which went on to become popular styles.

No longer was it appropriate to look covered on a beach. With sexual revolution stepping in, the swimwear went on to look bare. The year 1975 saw the famous poster of Farah Fawcett dressed in a red one-piece swimsuit selling a whopping 12 million copies!

There was much similarity between clothing and swimwear during this phase. The styles were rainbow-hued, printed and yes, body-baring.

The swimsuits of the 90s were an absolute ode to the crotch. One could find high and hip-baring swimsuits. Call it the influence of Baywatch babes who bared their hip bones in their red one-piece swimsuits.

Enter the 21st century and swimsuits have come a long way to getting free-for-all. There is the high-waisted bikini Taylor Swift style to the G-strings.

Women’s swim suits are today more of a statement thanks to the evolution that goes back to the yesteryears. Now there are different ways to wear bikini’s. Call it a fashion tide or a water revolution!

Reception Hairstyles: How To Nail Your Wedding Look

Is Vintage Lingerie The Latest Alibi For Bollywood Designers?

Fashionlady - April 19, 2013 0
Did you know Aishwarya Rai Bachchan had worn a vintage lingerie specially bought from Paris for the movie, Guzarish? Well, directors and actors are not...